Foreigners constitute 80 pct of investors in this year's public offerings 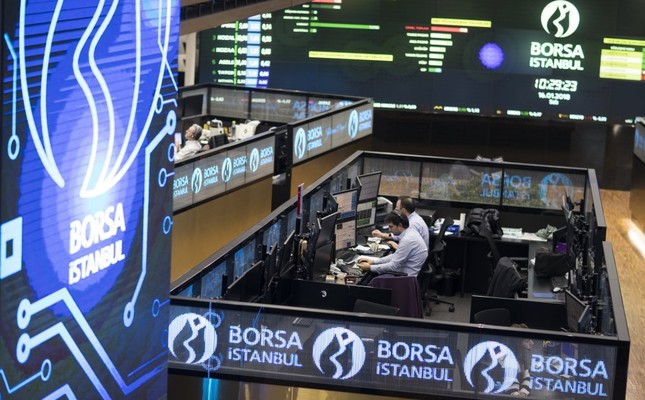 Turkey's Borsa Istanbul Stock Exchange started 2018 with a number of highly qualified and large public offerings with values exceeding TL 12 billion ($3 billion). Touching on the public offerings that have taken place in the first quarter of the year, Borsa Istanbul Chairman Himmet Karadağ announced Monday that more than 80 percent of investors were foreigners.

Karadağ stressed that realizations in the stock exchange are quite different from perceptions which are aimed for the Turkish economy.

Commenting on the public offerings of large local companies, Karadağ said that some of them have been made to domestic investors, with a higher demand of seven to eight times, while foreign investor interest has been intense in others.

"Foreign investors bought more than 80 percent of the shares of Turkish companies in the public offering," he said.

Pointing to negative assessments by international credit rating agencies, Karadağ stated: "Sales have taken place like this despite negative and prejudiced assessments by credit rating agencies about us in the recent period. This is because investors, of course, look at and pay attention to the views of rating agencies and international financial institutions, however, they are basically going to companies that will maximize their own returns. These companies are a part of the Turkish economy."

Underlining that Turkish companies have very dynamic and sustainable financial situation, Karadağ said when they make the right investment decisions, they offer very high returns. Emphasizing that capital markets in Turkey are still attractive, Karadağ continued that the Borsa Istanbul Stock Exchange had a return of more than 47 percent last year.

According to Karadağ, on the one hand, there are international credit rating agency reports suggesting "not to invest in Turkey," and on the other, there are investors who earn 47 percent in revenue.

He stressed that facts always shoot ahead of negative perceptions, saying, "We have positive micro-company financial statements this year. That is to say, in many sectors with a few exceptions, our companies are announcing very good financial situation that cannot even be compared to the previous year."

PUBLIC OFFERINGS TO CONTINUE TO INCREASE

Indicating that no sectors, from tourism to industry, have worse realizations and expectations than 2017, Karadağ stated that they hope to continue to increase the move of public offerings that started very positively in 2018.

Karadağ further said that public offerings in the first quarter of 2018 have exceeded TL 12 billion, adding that foreign investors have a share of more than 80 percent in these offerings. He underlined that rumors and realizations are quite different.

He explained that Turkey's story is about its economy and the dynamism and vitality of Turkish companies. "The return of foreigners investing in proper companies larger than medium sized are pushing 20 percent on dollar basis. There is no such return in companies in developed countries. International credit rating agencies and international financial institutions have the same indicators," he said.

"You know how many times institutions like the International Monetary Fund (IMF) and the World Bank have upwardly revised macro indicators about the Turkish economy and economic growth. Our economy has grown by 7 percent as opposed to 2 to 3 percent they estimated. Moreover, our companies have positive situations."

He said markets have properly read Operation Olive Branch in Afrin, which was backed by an overwhelming social support. Karadağ added that the operation has ensured stability and peace environment there.

The Borsa Istanbul chairman also noted that peace environment reinvigorates lingering economic activities and reaccelerates value-added production, as well as enabling markets to make right decisions as opposed to what credit rating agencies and other international financial institutions suggest. "Rating agencies need to be properly examined. Sometimes they make these kinds of moves to buy a product at a rock bottom price," he said.

Reminding that they completely changed the parameters and directions of public offering and quotation last year, Karadağ said: "Previously, we had different conditions special for sectors and sizes such as 'announcing net profits for the past two years.' We have revised all of those conditions in a facilitating way for public offering companies."

"Especially, we made public offerings very easy that will ensure fund flow into companies. Why did we do that? Because the foreign fund and foreign exchange rate risks faced by companies were not manageable in some sectors. The fluctuations in exchange rates were affecting the sustainability of our companies very badly. So, we have seen such great examples in negative firm values before the public offering have moved up significantly when foreign funds and exchange rate risks are manageable. This move will continue," he said.

Share on Facebook Share on Twitter
Previous in Economy High interest from hundreds of investors from Gulf countries who came... Next in Economy Economic confidence in Turkey slipped month-on-month in March, falling...
DAILY SABAH RECOMMENDS