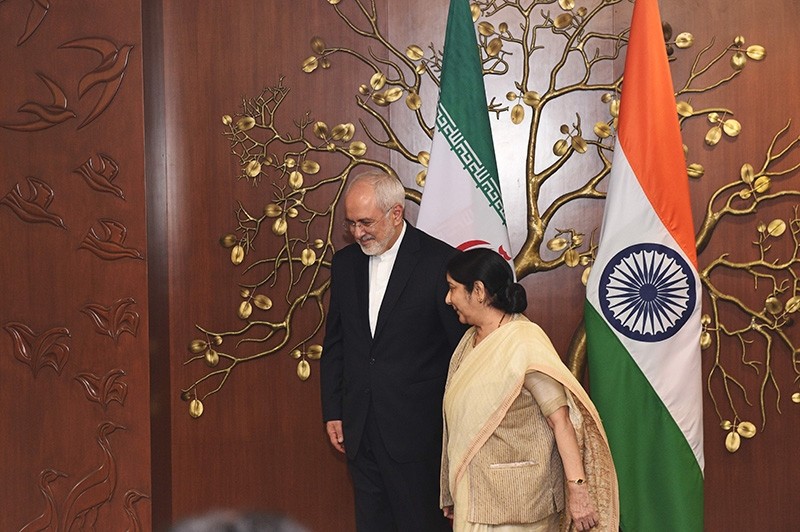 Indian Minister of Foreign Affairs Sushma Swaraj (R) walks next to her Iranian counterpart Mohammad Javed Zarif before a meeting in New Delhi on May 28, 2018. (AFP Photo)
by Compiled from Wire Services May 28, 2018 12:00 am

India will keep trading with Iran and Venezuela despite the threat of fallout from U.S. sanctions against the two countries, Foreign Minister Sushma Swaraj said Monday.

Swaraj, asked at a news conference whether U.S. action against Iran and Venezuela would damage India, said the country would not make foreign policy "under pressure."

"India follows only U.N. sanctions, and not unilateral sanctions by any country," she said at a news conference in response at a question on India's response to the U.S. decision.

India and Iran have long-standing political and economic ties, with Iran one of India's top oil suppliers.

U.S. President Donald Trump this month withdrew from the Iran nuclear deal and ordered the reimposition of sanctions suspended under the 2015 accord.

Washington has also tightened sanctions against Venezuela over the controversial re-election of President Nicolas Maduro.

Both countries are key oil suppliers to India and the United States has warned that foreign companies which deal with Iran could themselves be punished.

But Swaraj said New Delhi did not believe in "reactionary" policies and would not be dictated to by other countries.

Bilateral trade between India and Iran amounted to $12.9 billion in 2016-17. India imported $10.5 billion worth of goods, mainly crude oil and exported commodities worth $2.4 billion.

India has other interests in Iran, in particular a commitment to build the port of Chabahar on the Gulf of Oman.

The port is being touted as a way for India to establish trade routes that bypass rival Pakistan.

Media reports have speculated India could revive a rupee-rial payment arrangement with Iran to shield exporters from the heat of U.S. sanctions.

Swaraj also said India would continue trading with Venezuela, but there was no plan to use its local cryptocurrency in oil trade.

"We cannot have any trade in cryptocurrency as it is banned by the Reserve Bank of India. We will see which medium we can use for trade," she said.