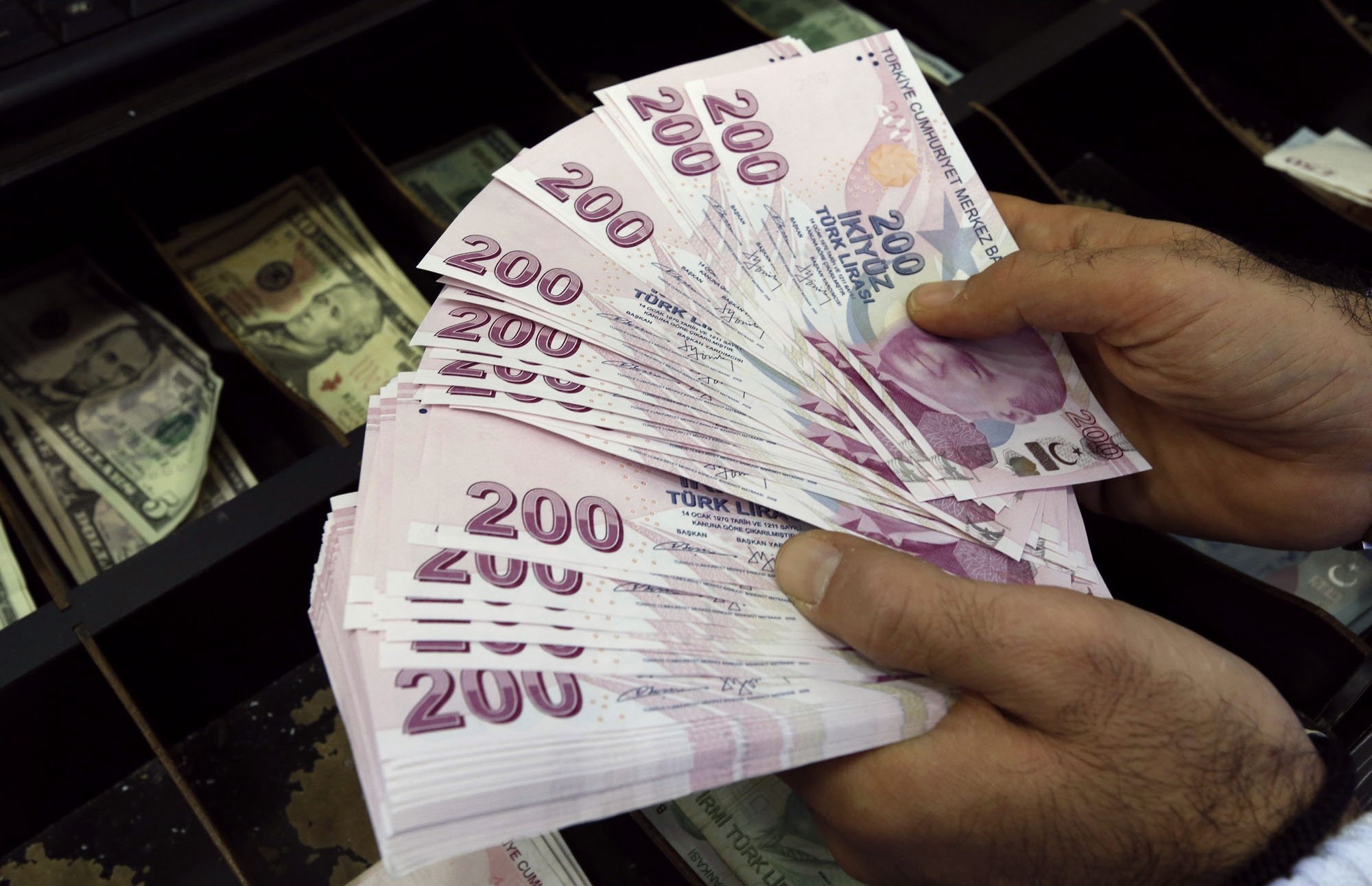 A money changer counts Turkish lira bills at a currency exchange office in Istanbul.
by Daily Sabah with AA
Jul 02, 2018 12:00 am

The Turkish lira decoupled from its peers following the June 24 elections, appreciating nearly 2 percent against the U.S. dollar last week. Commenting on the issue, analysts suggested that the fall in the dollar could accelerate with the right steps in the coming period

The June 24 presidential and parliamentary elections have cleared away the political and economic uncertainties looming over the Turkish markets for some time. The elimination of uncertainties and the expectation of market-friendly cabinet members in the new government have supported TL-denominated assets, particularly the Turkish lira, which has decoupled from its peers last week and recorded a 2 percent rise against the dollar. The Turkish lira was trading at 3.80 per dollar at the beginning of this year. But the dollar/Turkish lira exchange rate has followed a volatile course with mostly an upward trend, hence seeing historic highs.

The rising dollar index, which measures the greenback's value against the majority of the U.S.'s most significant trading partners, and the uncertainty ensuing from the election process, resulted in the dollar/Turkish lira exchange rate hitting 4.92 on May 23. While the greenback has continued to spike against emerging market (EM) currencies last week, the Turkish lira decoupled from other emerging currencies following the June 24 elections and appreciated by 1.86 percent against the dollar last week, becoming the best performing EM currency. The other emerging market currencies tumbled against the dollar by 1.5 percent this week with Argentina's peso taking the lead as it fell down by 7 percent against the dollar.

Analysts evaluating the appreciation in the Turkish lira claimed that the negative trend in the currency has been reversed as the markets have calmed down following the elections and the fall in the dollar is likely to continue with right steps to be taken in the near future.

Anadolu Investment Deputy General Manager Hakan Kocaman highlighted that the Turkish lira has recently decoupled from its peers and started to compensate for the steep depreciation since the beginning of this year. The positive trend in the lira has been driven by the positive expectations after the snap elections.

"Expectations that the fiscal policy that had followed an expansionary course because of the elections will be tightened by the new cabinet and the statements ensuring that the tight monetary policy will be maintained have positively affected the lira," Kocaman said.

He underscored the necessity of responding to market expectations and boosting confidence to sustain the positive trend in the Turkish lira. If the dollar/Turkish lira exchange rate remains stable below 4.60, it might fall below 4.56 and retreat to the 4.50 to 4.45 level. However, if the rate hits 4.70, it might also see 4.80, a level that would not be broken in the short term.

Integral Investment Research Director Tuncay Turşucu also stressed that the elimination of the uncertain environment due to the elections and that the conclusion of presidential elections in the first round have enabled the compensation of some of the losses in TL-denominated assets.

Turşucu stated that the sustainability of the appreciation in the Turkish lira depends on two factors: "The first is the external factors and the strengthening U.S. dollar. If the dollar continues to gain value, this may continue to create negative pressures on the Turkish lira.

Another external factor is whether the money outflow from the emerging markets will continue or not. The second factor is more related to internal affairs. Markets are waiting for people to be appointed to the cabinet, steps to be taken and the discourse in the new period. New ministers are going to be announced on July 8 and that is good news for the markets. However, statements following the appointment of the ministers will be decisive on TL-denominated assets," he emphatically stated that if the environment of confidence that the markets are looking for has been ensured, the value gain in the lira may continue and the decline in the dollar/Turkish lira exchange rate may continue.

Integral Investment Research Director Turşucu noted that 4.50 and 4.45 are important support levels for the dollar/Turkish lira exchange rate and that if the rate hits below this level, the fall may continue until the rate retreats to 4.25 to 4.30.

Erkan stressed that thanks to its appreciation after the elections, the Turkish lira was the best performing emerging market currency

last week. Following the clearance of uncertainties due to the elections, investors pay attention to how the new economic administration will be shaped and what kind of steps related to fiscal and monetary policies will be taken.

"Supporting fiscal discipline and the cut-down in public expenditures with tight monetary policy is likely to prevent negative conditions in the dollar/Turkish lira exchange rate. Besides, in a climate where inflationary expectations are high and the sales of EM bonds continue, the monetary policy of the Central Bank of the Republic of Turkey (CBRT) are the most important agenda items to closely watch," Erkan said and added that the market will initially consider the schedule of Parliament and the new Cabinet. "The markets wonder about new cabinet members and the ability to implement economic reforms," he said.

If the dollar/Turkish lira exchange rate creates pressure on 4.66, it might retreat to 4.58 or 4.55. "To sustain the short-term reactions to the dollar/Turkish lira exchange rate, stability below 4.58-4.55 levels is necessary," Erkan highlighted and noted that this level might pull the support levels initially to 4.51 and then to 4.48 and 4.45 levels.