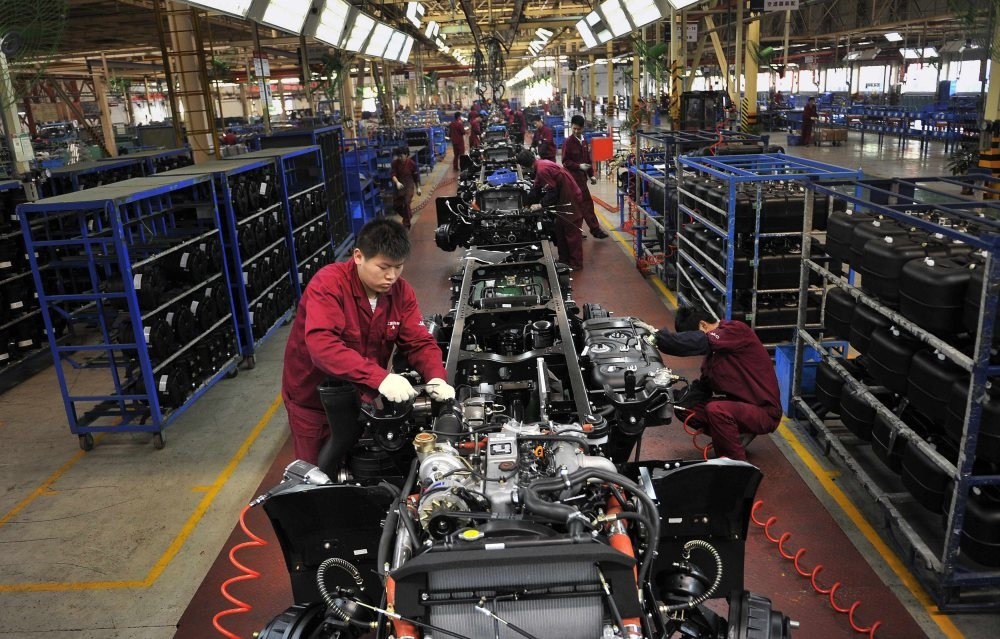 Workers install the chassis along a production line at a truck factory in Hefei, Anhui province, China.
by Jul 03, 2018 12:00 am

Factory growth was knocked down in June across Europe and Asia amid weak global exports and anxiety over promised trade tariffs and a trade standoff between China and the U.S.

Manufacturing activity took a hit in June across Europe and Asia, with exporters losing momentum even before promised trade tariffs kick in, underscoring worries the U.S. administration's protectionist policies could derail global growth.

U.S. President Donald Trump has threatened tariffs on European cars on top of duties he imposed on steel imports from the European Union. There are also fears that a trade standoff between China and the United States could harm manufacturers who rely on the world's two largest economies for growth.

Stocks, the euro and oil prices fell as the data were the latest to suggest world growth may have peaked. The recent economic strain is likely to intensify as the effects of the heated China-U.S trade spat ripple through global supply chains.

German factory growth slipped to an 18-month low and French manufacturing activity slowed more than previously thought in June to its weakest pace in nearly 1-1/2 years.

While British factories kept up a steady pace of growth, fears of a full-blown global trade war and worries about stalled negotiations with Brussels on leaving the EU knocked a gauge of confidence about the outlook down to a seven-month low.

"Today's numbers continue to corroborate that manufacturing settled into a lower gear in the first half of the year," said Neal Kilbane, senior economist at Oxford Economics.

"The very real threat of the current trade dispute with the U.S. escalating further means that Europe's manufacturers are likely to have to negotiate stormy waters for the rest of year."

The slowdown was broad-based across not just Europe but most of Asia as well.

Shipments from China and Japan, major manufacturing hubs, contracted in June, while businesses across Asia also took on higher input costs as the price of oil and other commodities rose, according to monthly manufacturing surveys.

"We expect the net contribution of trade to growth to become negative in the second half of the year, if it hasn't already for some countries," ANZ Asia economist Eugenia Victorino said.

"The story for 2018 then becomes domestic demand, but it is not a homogenous story ... and we don't expect a homogenous reaction from Asian central banks."

However, with the U.S. Federal Reserve increasingly hawkish on rates, hardly any Asian central bank has room to support consumption as they need to keep their own rates relatively high to prevent destabilizing capital outflows.

Apart from China potentially cutting reserve requirements further this year, no other central bank is seen easing monetary policy, and the countries running current account deficits may have to hike rates further.

China's Caixin/Markit Manufacturing Purchasing Managers' index (PMI) declined to 51.0 in June from May's 51.1, with a sub-index showing new export orders contracting for the third straight month and the most in two years.

An official PMI survey on Saturday also fuelled concerns about the strength of the world's second-largest economy, where recent data including credit growth, investment and retail sales have disappointed. The economy is feeling the pinch of an internal crackdown on debt and risky financing as well as external pressure from Trump's 'America First' protectionist policies.

The U.S. has threatened to impose duties on up to $450 billion of Chinese imports, with the first $34 billion portion set to go into effect on July 6. Beijing plans to retaliate.

This has caused anxiety in financial markets, leading to the worst performance on record for the yuan and the deepest monthly fall in Chinese stocks since January 2016.