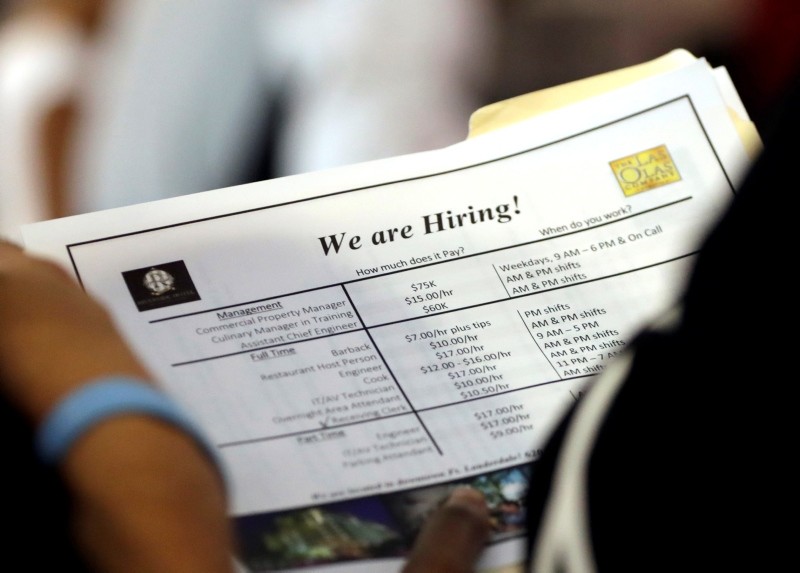 U.S. job growth increased more than expected in June as manufacturers stepped up hiring, but steady wage gains pointed to moderate inflation pressures that should keep the Federal Reserve on a path of gradual interest rate increases.

Nonfarm payrolls rose by 213,000 jobs last month, the Labor Department said on Friday. Data for April and May was revised to show 37,000 more jobs created than previously reported. The economy needs to create roughly 120,000 jobs per month to keep up with growth in the working-age population.

The unemployment rate rose to 4.0 percent from an 18-year low of 3.8 percent in June as more people entered the labor force in a sign of confidence in the jobs market. That was the first increase in the jobless rate in 10 months.

The labor force participation rate, or the proportion of working-age Americans who have a job or are looking for one, rose to 62.9 percent last month from 62.7 percent in May. It had declined for three straight months.

The moderate wage growth should allay fears of a strong build-up in inflation pressures. The Fed's preferred inflation measure hit the central bank's 2 percent target in May for the first time in six years. It is expected to hover around its target for a while, in part because of labor market tightness.

Minutes of the Fed's June 12-13 policy meeting published on Thursday offered an upbeat assessment of the labor market. The U.S. central bank increased interest rates last month for the second time this year and has projected two more rate hikes by year end.

The dollar extended losses against the euro and the yen after the employment report. Prices for U.S. Treasuries rose. U.S. stock index futures were little changed.

With a record 6.7 million unfilled jobs in April, economists are optimistic that wage growth will accelerate later this year.

Economists polled by Reuters had forecast nonfarm payrolls increasing by 195,000 jobs last month and the unemployment rate steady at 3.8 percent.

A broader measure of unemployment, which includes people who want to work but have given up searching and those working part-time because they cannot find full-time employment, rose to 7.8 percent last month from a 17-year low of 7.6 percent in May.

The employment report together with data from the Commerce Department showing the trade deficit narrowed 6.6 percent to a 1-1/2-year low of $43.1 billion in May reinforced expectations of robust economic growth in the second quarter.

Gross domestic product estimates for the April-June period are above a 4 percent annualized rate, double the 2.0 percent pace logged in the first quarter.

But the Trump administration's "America First" trade policy, which has tipped the United States into a trade war with China poses a risk to the labor market and economy.

President Donald Trump has imposed tariffs on a range of imported goods, including steel and aluminum, to protect domestic industries from what he says is unfair competition from foreign manufacturers.

Major trade partners, including China, Canada, Mexico and the European Union, have retaliated with their own tariffs. The U.S. and China slapped tit-for-tat duties on $34 billion worth of the other's imports on Friday.

Economists have warned the tit-for-tat import tariffs could disrupt the supply chain, undermine business investment and raise prices for consumers, and wipe out the stimulus from a $1.5 trillion tax cut package that came into effect in January.

They expect the manufacturing sector to bear the brunt of the trade fights, through a slowdown in hiring and capital expenditure. But for now the sector, which accounts for about 12 percent of the U.S. economy, appears in good health.

Manufacturers hired 36,000 workers in June, the most in six months, adding to the 19,000 jobs created in May. The factory jobs were concentrated in the automobile sector, which had seen a decline in employment in May after a fire at a parts supplier disrupted production.

Construction payrolls rose by 13,000 last month after rising by 29,000 jobs in May. There were increases in professional and business services employment as well as leisure and hospitality. But retailers cut 21,600 jobs last month, after boosting payrolls by 25,100 in May.

Government payrolls increased by 11,000 jobs in June. That followed an increase of 5,000 jobs in May.