US trade deficit decreases to 18-month low of $43.1 billion in May, exports surge 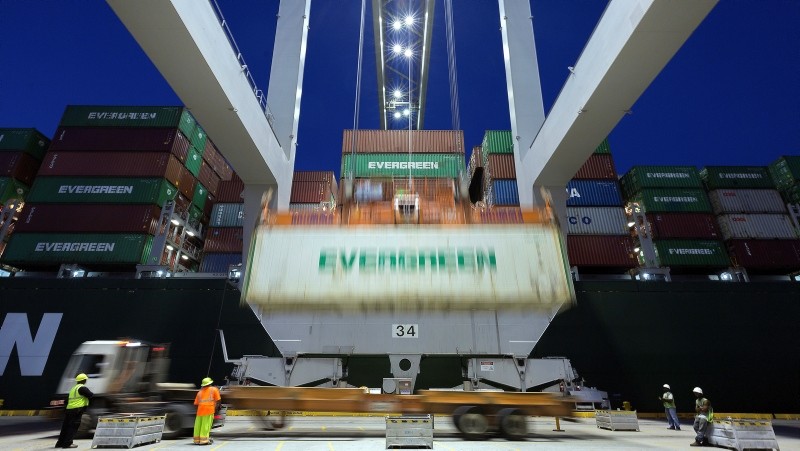 In this June, 19, 2018, file photo, an Evergreen Line refrigerated container is lifted by a ship to shore crane onto the container ship Ever Linking at the Port of Savannah in Savannah, Ga. (AP Photo)
by French Press Agency - AFP
Jul 06, 2018 12:00 am

A burst of U.S. exports of soybeans, commercial aircraft and other goods drove the American trade gap to its lowest level in 18 months in May, the government reported Friday.

As Washington prepared to embark on a multi-front trade war that month, the U.S. trade deficit fell 6.6 percent to $43.1 billion in May due to all-time record exports.

China immediately retaliated, marking the start of what Beijing called the largest trade war in history.

And within the May numbers, there were strong signs that by that importers and exporters bumped up their purchases and sales in anticipation of looming tariff battle.

The strong exports support stronger GDP growth in the second quarter but at the same time suggested the gain could be temporary.

"The story presumably is that Chinese importers have been buying U.S. soy ahead of the imposition of tariffs -- effective today -- in retaliation for US tariffs on Chinese goods," Ian Shepherdson of Pantheon Macroeconomics wrote in a client note.

Excluding the erratic categories of oil, aircraft and now soybeans, the deficit in fact rose in May, he said, meaning "the underlying upward trend will re-emerge soon."

Total exports rose nearly two percent to a record $215.3 billion, much faster than the 0.4 percent jump in imports to $258.4 billion.

Exports of goods rose to their highest on record of $144.2 billion, supported by all-time record shipments of foods and feeds, including a $2 billion jump in tariff-threatened soybeans.

Early Friday, there was confusion over what products Beijing authorities have targeted for retaliation against Trump's offensive but China had announced plans to slap punishing duties on the US soy industry, which is heavily dependent on the Chinese and Mexican markets.

Despite the dip in the U.S. trade deficit, the trend remained little changed, with the gap up nearly eight percent year-to-date compared to the first five months of 2017.

Trade with countries currently locked in battle with Trump also was robust: Exports to Mexico were $22.7 billion, a record; while imports from Canada were the highest since December 2014 at $28.8 billion.

Imports from South Korea, which recently amended a free-trade agreement with the United States, were at an all-time high of $6.7 billion.

Rising crude prices also threatened to fuel the US trade gap, with the average price of a barrel hitting $58.37, a three-year record.

"The vehicle industry has been particularly aggressive in both importing and exporting their vehicles to land ahead of US and retaliatory tariffs."