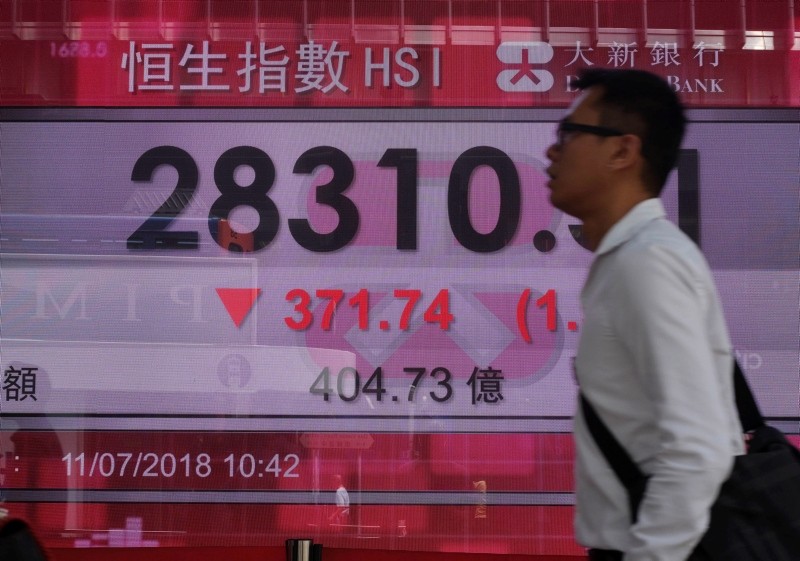 A man walks past a bank electronic board showing the Hong Kong share index at Hong Kong Stock Exchange Wednesday, July 11, 2018. (AP Photo)
by Daily Sabah with Agencies
Jul 11, 2018 12:00 am

Industrial metals sank Wednesday on global markets as U.S. threats of tariffs on an additional $200 billion worth of Chinese goods pushed the world's two biggest economies ever closer to a full-scale trade war.

Copper is seen by many as a global economic bellwether, particularly for growth.

The U.S. Trade Representative announced Tuesday a possible second round of tariff hikes targeting a $200 billion list of Chinese goods ranging from burglar alarms to mackerel. That came four days after Washington added 25 percent duties on $34 billion of Chinese goods and Beijing responded by increasing its own taxes on the same amount of American imports.

China slammed the U.S. threat to expand tariff hikes as a "totally unacceptable" escalation of their trade battle and vowed to protect its "core interests."

The spiraling conflict over Chinese technology policy threatens to chill global economic growth. It stems from Washington's belief that Beijing steals or pressures companies to hand over technology and worries that plans for state-led development of Chinese champions in robots and other fields might erode American industrial leadership.