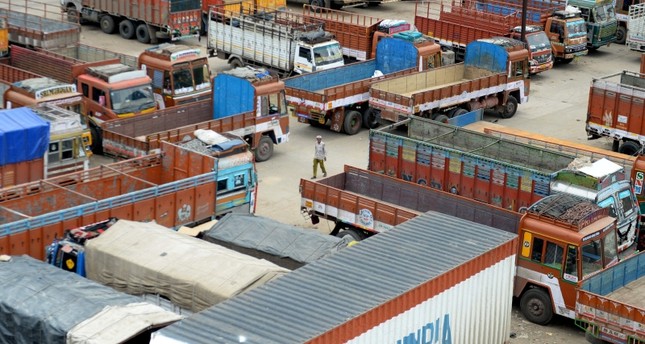 An Indian man walks past truck parked at a terminal during a nation wide indefinite strike called by truck owners against increasing fuel and toll prices, in Chennai on July 20, 2018. (AFP PHOTO)

Global trade conflicts triggered by the protectionist policies of US President Donald Trump are set to dominate this weekend's meeting of Group of 20 finance ministers in Buenos Aires.

US Treasury Secretary Steven Mnuchin is set to "respond to concerns on US trade policies" in the meeting that groups finance ministers and central bankers from the world's 20 leading economies, including the European Union.

But International Monetary Fund chief Christine Lagarde has warned that increasing trade restrictions pose "the greatest near-term threat" to the world economy, despite projected growth of 3.9 percent through 2019.

She also warned Trump on Wednesday that "the US economy is especially vulnerable" due to "retaliatory measures."

IMF economists say that in a worst case scenario $430 billion, a half point, could be cut off global GDP in 2020 if all tariff threats and retaliation are implemented.

On the sidelines of the wider meetings, Group of Seven officials will also hold a one-hour session to again discuss what the United States dubs "China's economic aggression."

The future of the North American Free Trade Agreement is also expected to come up in the main meeting, with high-stakes negotiations underway between the United States, Mexico and Canada to revamp the pact.

But unlike June's G7 summit in Quebec, where Trump pulled his support for the joint communique, the Buenos Aires meeting is expected to produce a common statement agreed by all, although perhaps one watered down on the question of protectionism, at the US's behest.

During the group's first meeting of the year in Buenos Aires in March, the ministers were at pains to agree on a statement that proffered the bland acknowledgement that "economic and geopolitical tensions" threatened global growth.

And that was before Trump launched a raft of measures targeting US imports.

He imposed steep tariffs on steel and aluminum, angering allies such as the EU, Canada and Mexico, and prompting swift retaliation.

He also hit China with 25 percent duties on $34 billion in goods, with another $16 billion on the way, and another $200 billion could be targeted as soon as September.

Last weekend he upped the ante by describing the EU as a "foe" and reiterating a previous claim that the bloc has "really taken advantage of us on trade."

But the gathering won't exclusively focus on the United States, and its current strained relations with much of the rest of the G20.

Minister will also tackle the economic crises threatening a number of emerging markets -- including host nation Argentina, which recently secured a $50 billion IMF loan to try to stabilize its economy, after the peso plunged 35 percent between April and June.

"The situation facing certain emerging markets is more delicate with the rise of the dollar and the question of capital flows," a French source told AFP.

As well as the dollar, rising oil prices and US interest rates has helped fuel the capital flight from emerging economies such as Brazil and Argentina, with investors taking out $14 billion between May and June.

"In Buenos Aires, what will be on the table is protectionism and the strengthening of the WTO from the point of view of emerging countries such as Brazil," he said.

Amidst such tensions, ministers will discuss the upsurge in debt amongst the poorest countries in the world, but not everyone believes there is a genuine resolve to do what's best for others.

"If you analyze attentively the final communiques of these groups, historically they only showed what was agreed upon," Nicolas Albertoni, a Uruguayan researcher at the University of Southern California, told AFP.

"Now, they also highlight what wasn't agreed upon, which demonstrates a rise in nationalism. Now, governments don't consider reaching agreement a success, but rather preventing it."

Share on Facebook Share on Twitter
Previous in Economy U.S. stocks slipped on Thursday after earnings disappointed and trade... Next in Economy While U.S. Treasury officials visit Ankara to discuss sanctions on...
DAILY SABAH RECOMMENDS