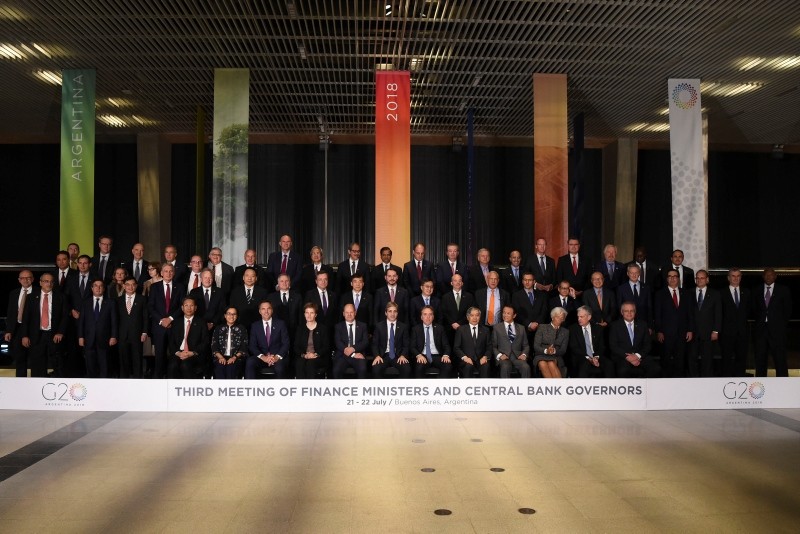 Group of 20 finance ministers warned on Sunday that "heightened trade and geopolitical tensions" posed risks to global economic growth as two days of meetings came to a close.

The G20 emphasized "the need to step up dialogue and actions to mitigate risks and enhance confidence," in its final communique after a summit dominated by fears over an escalating global trade conflict.

"Global growth remains robust and unemployment is at a decade low. However, growth has become less synchronized recently, and downside risks over the sort and medium term have increased," said communique.

The ministers reaffirmed the conclusions from G20 leaders at their most recent summit in Hamburg in July last year, when they emphasized that trade was an engine of global growth and reaffirmed the importance of multilateral trade agreements.

"The protectionist trade policies are likely to cause new troubles both in the fields of production and employment," he said.

"For us, it was a remarkable and crucial meeting including an intense economic diplomacy," Albayrak said, noting that he had bilateral discussions with his counterparts from the U.S., EU, China, Germany, France, Brazil, South Korea, Indonesia and other countries.

"In this sense, the G20 summit was extremely fruitful with a strong communication," the minister added.

Pointing out Turkey's domestic, regional and global economic policies, Albayrak stressed that Turkey demonstrated how the country pursues sharing, win-win-based, active and dynamic policies -- thanks to the projects until today.

"Turkey will experience a much more powerful period in which it will not live what [problems] it lived in the past with a new development program, budget plan and macroprudential policies," he said.

Albayrak noted that he found the chance to explain Turkey's transformation and development success stories, while he attended a session as a main speaker to talk about Turkey's infrastructure investments -- valued more than $400 billion -- over the past 15 years.

"Indeed, we saw great favor from the audience," he added.

The communique from the summit did not mention the United States, which is at the center of multiple trade disputes, but in March the G20 had avoided the issue altogether.

Trump's protectionist policies have come under fire from all sides at the summit, which groups finance ministers and central bankers from the world's 20 largest economies.

As well as imposing tariffs of 25 percent on steel and 10 percent on aluminum, Trump stuck a 25 percent levy on $34 billion of goods from China with an additional $16 billion on the way.

He has threatened to target European automotive exports and to impose duties on the entire $500 billion of goods the U.S. imports from China.

The International Monetary Fund predicts that in a worst-case scenario, $430 billion -- or a half percentage point of global GDP -- could be cut in 2020 if all tariff threats and retaliations are carried out.

IMF chief Christine Lagarde had warned on Wednesday that the US economy was "especially vulnerable" to trade conflicts "because so much of its global trade will be subject to retaliatory measures."