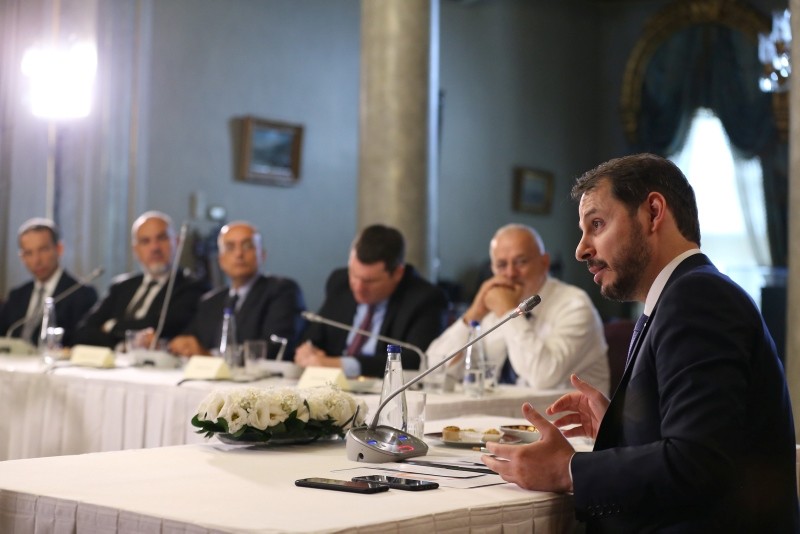 Treasury and Finance Minister Berat Albayrak on Monday met with the Turkey's leading economists, columnists and academics in Istanbul to discuss the state of the Turkish economy and get their insights on key topics and global markets.

"We had a fruitful meeting with economists and academics about what our economic policies should be. These meetings will be held regularly and we will prepare a road map with contributions from all sectors," Albayrak tweeted following the consultative meeting.

Speaking to the press after the meeting, columnist Professor Kerem Alkın said they discussed what the hot topics in global markets were, how those topics would affect leading markets, including Turkey, and how Turkey could benefit from developments in global markets in the medium and long term within this scope.

According to Şeref Oğuz, an economy columnist at Turkish daily Sabah, everyone voiced their opinions about what economic policies Turkey should follow in the short and medium term, and the minister paid attention to every single opinion while taking a lot of notes. Oğuz said the meeting came to the conclusion that Turkey had both opportunities and threats ahead of it in this period of transformation, and there was a strong emphasis on 'harmony'.

Professor Erhan Aslanoğlu of Piri Reis University said it was a fruitful meeting as well.

"We exchanged views about the future of Turkey's economy and global markets," he said, adding that people from various sectors contributed to the meeting with a diverse range of ideas.

The meeting, which took place in Dolmabahçe Palace in Istanbul, lasted 2.5 hours.

Earlier in the day, Albayrak had told reporters on a flight to Argentina for a G20 summit that Turkey would not fight with markets but pursue a "win-win" relationship with them while ensuring Turkey has an effective central bank.

His comments cemented expectations of an interest rate hike this week, and helped the Turkish lira firm against the U.S. dollar.

The lira rose 0.8 percent against the dolar on Monday, leading emerging currency gains, ahead of Tuesday's central bank meeting.

But he warned Albayrak would have to follow these positive comments with concrete measures, "and if that happens then confidence amongst investors should be gradually restored".