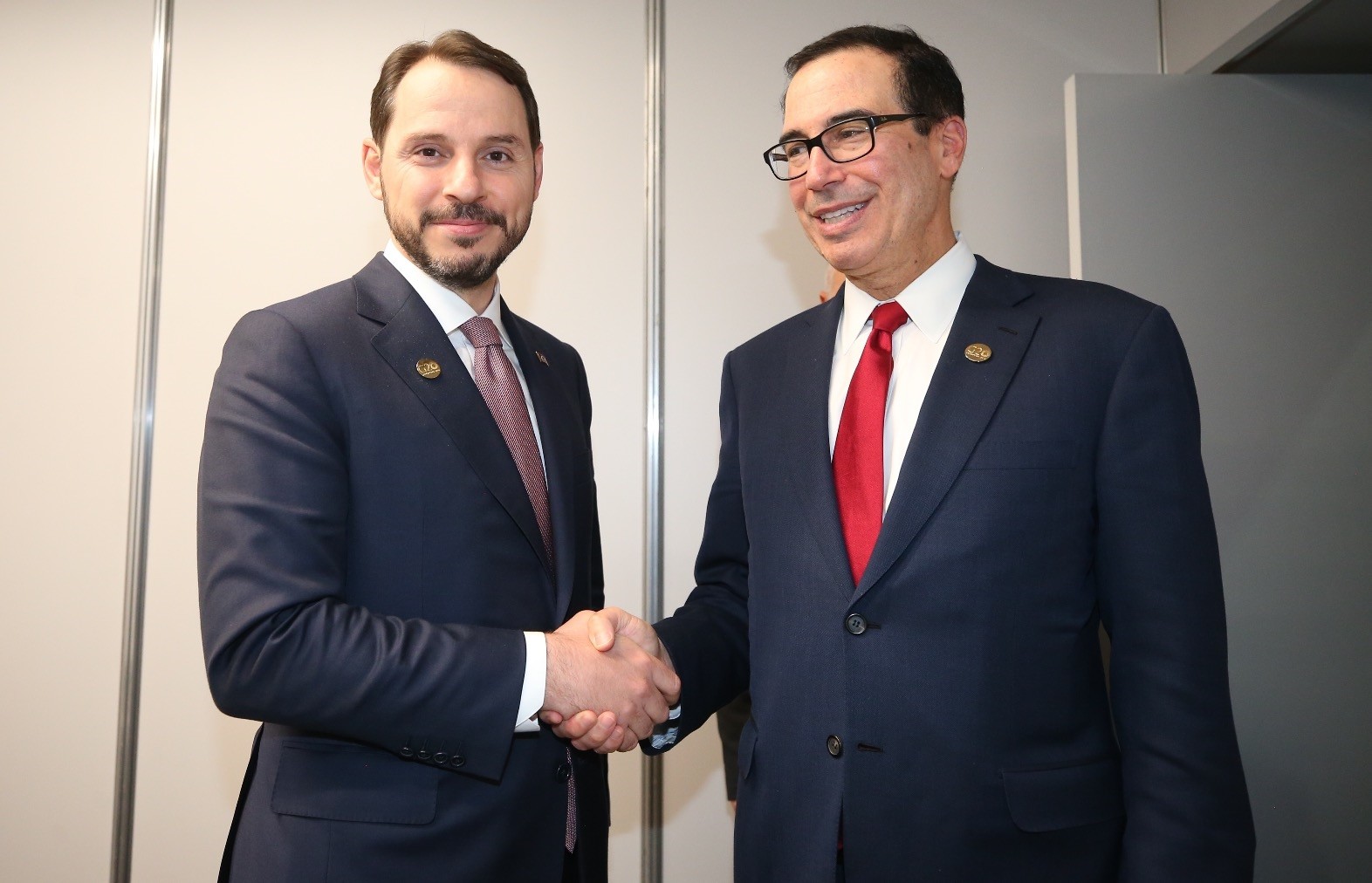 Treasury and Finance Minister Berat Albayrak (L) meets with U.S. Secretary of Treasury Steven Munchin on the sidelines of the G20 Meeting of Finance Ministers in Buenos Aires, Argentina, July 21, 2018.
by daily sabah Jul 23, 2018 12:00 am

Treasury and Finance Minister Berat Albayrak criticized growing protectionist measures and stances, which have clouded the global outlook, warning that they will have negative effects on productivity and global prosperity. Accompanied by Central Bank of the Republic of Turkey (CRBT) Governor Murat Çetinkaya, Albayrak made his first overseas trip since taking office and attended the G20 Meeting of Finance Ministers and Central Bank Governors in Argentine's capital Buenos Aires over the weekend.

The minister pointed out that the meeting was taking place at a time when the global economy had gone through a tough test with increasing protectionism and trade balances were being written from scratch. "Indeed, for us it was a historic and critical summit involving intense economic diplomacy at a time when global trade had gone through a very tough test and Turkey began a new era," Albayrak said. Serious warnings about protectionist trade policies also came to the fore in the G20 sessions, the minister said, suggesting that these policies, which were likely to lead to new problems in productivity, production and employment, had been voiced by many countries with very serious warnings.

Albayrak took the stage in a meeting entitled Global Economic Risks. Criticizing global protectionist measures, the minister said: "In the short-term, the current account balance, output level and export volume will deteriorate. New business areas will be limited. We believe open markets and free trade will continue to be at the center of our policy efforts."

He stressed that Turkey proved to be an active and dynamic political force based on a participative and win-win principle both in its own economic policies and in regional and global economic policies with the projects carried out up to now, recalling that these projects were specifically addressed in his presentation as the keynote speaker of the G20's session on infrastructure.

Turkey is continuing its strong economic growth trend and the foundations of its economy are strong, Albayrak said. He was quoted by Anadolu Agency as saying the government's recent policies were aimed at maintaining prudent fiscal policies, seeing healthy credit growth, carrying out structural reforms and strengthening Turkey's monetary policy framework.

"Turkey's economy continues its strong growth momentum. Our economic foundations are going to be strong and our outlook is promising," Albayrak said.

Following his appointment, Albayrak said the central bank is independent and will do whatever economic realities and market conditions necessitate. The central bank's monetary policy committee, which has raised rates by 500 basis points since April in an effort to put a floor under the currency, will meet tomorrow. According to analysts yesterday, the central bank is expected to hike rates at the meeting.

Minister Albayrak said the new presidential structure brought structural changes in Turkey's administration, indicating that they reorganized ministries and institutions by reducing the number of ministers in the cabin from 26 to 16 and changing the ministerial structure on the economy side from six ministries to three in the new system.

"The Treasury and Finance Ministry is responsible for financial policies and debt management, the Industry and Technology Ministry for the real sector and the Trade Ministry for trade-related matters," he added.

Highlighting that the economy is prioritized for the next period, the minister said they set basic policies to follow decisively in economic policies in this context, focusing on maintaining budget discipline, fighting inflation and implementing well-defined structural reform agenda. "To reach our targets in the Turkish economy, we must establish coordination among all ministries in the economy," he noted.

Albayrak said they would prepare the medium term economic program (MTP) together with all stakeholders in an open and auditable manner.

$420B invested in infrastructure projects

Delivering the keynote speech, Developing the Roadmap to Infrastructure as An Asset Class, Albayrak noted that Turkey has long-lasting and successful performance in implementing high-quality infrastructure projects.

"Since 2002, our government has been allocating a substantial budget to improve infrastructure throughout the country. This prioritization is based on two main objectives, namely, creating a more favorable environment for investments and contributing to regional development, peace and stability," he said.

He also pointed to their understanding of the development of the infrastructure.

"Our efforts should not only contribute to the project partners but also create a win-win opportunity for a wide range of society," he said.

Albayrak also noted that Turkey has become a safe haven for investments, providing a stable and predictable environment with the help of its geopolitical position, strategic importance and high-quality infrastructure.

"On the other hand, our infrastructure development activities also contribute to our goals of creating jobs, struggling against inequalities and fighting terrorism. In this context, Turkey is seen as a reliable partner for all our peers in the new global economy," he added.

He remarked that Turkey has hosted six of the top 10 infrastructure projects in the world in the last decade. "In the past 16 years, our cumulative investments totaled $420 billion to cover other factors. We, as Turkey, are pleased to share our experiences on infrastructure funding that increases the participation of private capital," Albayrak added.