EU-US trade deal was on brink of collapse, Juncker says 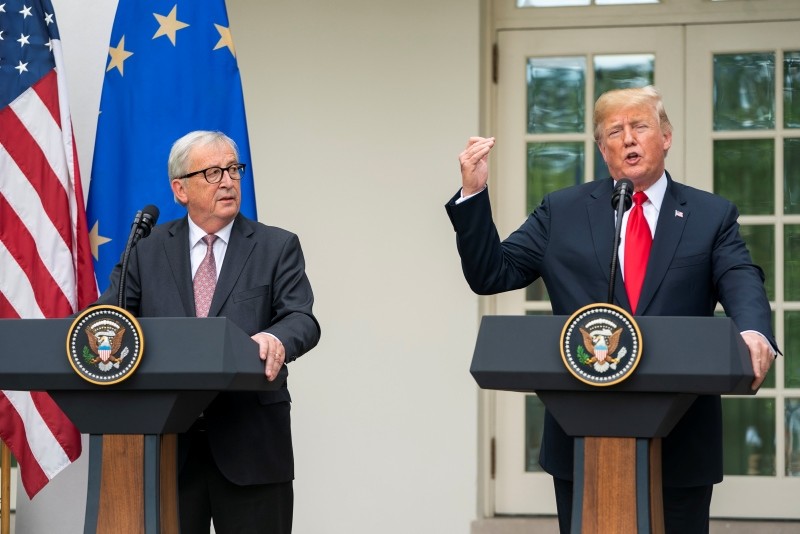 The plan hashed out by U.S. President Donald Trump and European Commission chief Jean-Claude Juncker to dial down trade tensions was intermittently on the brink of collapse, Juncker said Friday.

Trump and his delegation exerted "massive pressure" during negotiations to move the European Union toward a further opening of its agriculture markets, Juncker said in an interview at the Brussels studio of German broadcaster ARD.

Juncker said he flat out rejected such a move, "cognizant of the situation in Europe, not only in France but also in Belgium, in Ireland, also in Luxembourg and anywhere else," he added.

In order to reach an agreement, Juncker said the European Union was forced to abandon the prospect of European firms' access to a public offering in the U.S. as an main issue in the talks.

At a meeting in Washington on Wednesday, Trump and Juncker agreed to lay aside their months-long trade spat and impose no new special tariffs for the time being.

The White House and the Europeans now plan to launch talks aimed at an ambitious deal to abolish tariffs on industrial goods.

France was one of the countries to immediately demand clarification after the talks, citing comments from Trump that the agreement would open up new markets for U.S. farmers.

A European Commission spokeswoman on Friday said that European farmers had no need to fear stronger competition as a result of the deal. Agricultural products were excluded from the planned negotiations on a tariffs agreement, she said.

The agreement struck on Wednesday only involved a higher import of U.S. soy - something that is rarely produced in the EU due to the crop's climate requirements.