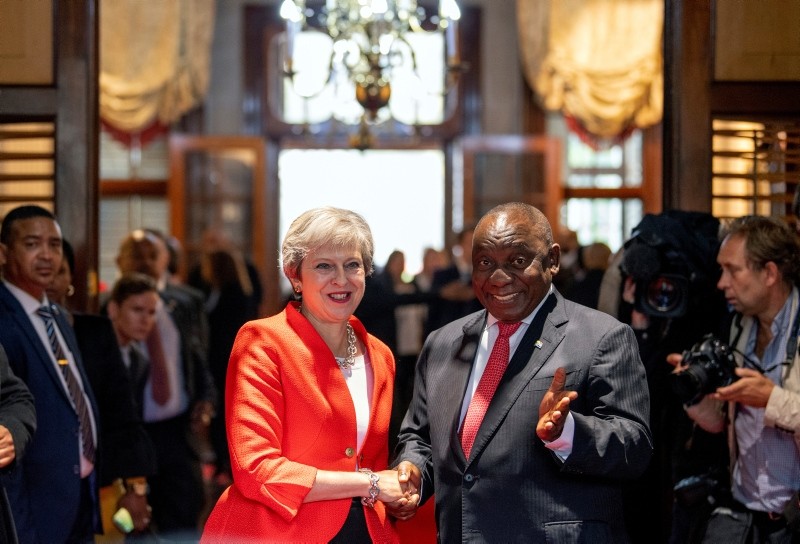 British Prime Minister Theresa May voiced support Tuesday for South Africa's land reform plans as she started a three-nation visit to Africa in Cape Town to boost relations with the continent in the wake of a Brexit deal.

May's comments will come as a relief to many in the country who were worried the land policy could scare off investment.

"The U.K. has for some time now supported land reform. Land reform that is legal, that is transparent, that is generated through a democratic process," May told reporters.

May said that she welcomed assurances already given by South African President Cyril Ramaphosa that there would be "no smash and grab."

"It's an issue that I raised and discussed with President Ramaphosa when he was in London earlier this year. I'll be talking about it with him later today."

The British prime minister's trip to the continent comes as the U.K. looks to shore up trade partners ahead of the U.K.'s departure from the European Union in March 2019. In an effort to strengthen Britain's economic relations with Africa, May will be visiting three of Africa's largest economies, South Africa, Nigeria and Kenya.

Arriving in a rainy Cape Town on Tuesday morning, May came with Britain's trade minister and a delegation of 29 business leaders. May's trip is to highlight her aim to significantly increase Britain's investment and trade in Africa.

May's trip is the first working visit by a British leader to South Africa since 2011.

"By 2022, I want the U.K. to be the G7's number one investor in Africa, with Britain's private sector companies taking the lead," May told business leaders in Cape Town.

The G7 groups major industrialized nations, but does not include China.

"As prime minister of a trading nation whose success depends on global markets, I want to see strong African economies that British companies can do business with," she said.

"I want to create a new partnership between the UK and our friends in Africa built around shared prosperity and shared security."

The tour, May's first to the continent since becoming premier in 2016, is seen as an effort to stamp her authority on her embattled premiership.

May is facing pressure at home from so-called Remainers skeptical of her ability to forge trade deals once Britain severs ties with the EU, as well as from Brexiteers fearful she will not deliver a clean break.

"As we prepare to leave the European Union, now is the time for the U.K. to deepen and strengthen its global partnerships," she said in a statement.

Britain will use its international aid budget to boost its own interests while also seeking to deepen trade ties with Africa, May said, countering critics who say aid funds would be better spent at home.

The government has held out the prospect of increased trade with non-European Union countries as one of the major selling points of Brexit as it prepares to leave the bloc, currently its biggest trading partner, in March next year.

In April, Britain hosted a meeting of Commonwealth countries, including South Africa, Kenya and Nigeria, seeking to reinvigorate the network of mostly former colonies and drum up new trade amongst its members.

May recommitted to maintaining the overall British aid budget at 0.7 percent of economic output but said she would use it in a way that helped Britain.

"I am unashamed about the need to ensure that our aid program works for the UK," May said.

"Today I am committing that our development spending will not only combat extreme poverty, but at the same time tackle global challenges and support our own national interest."

Britain's overseas aid last year was 13.9 billion pounds ($18 billion). The budget has come under fire from many of May's own lawmakers, who say it is too high and should be spent elsewhere or in Britain itself.

May, who was accompanied by a delegation of British business executives, also said Britain would work with African states to tackle insecurity and migration by creating jobs.

"It is in the world's interest to see that those jobs are created, to tackle the causes and symptoms of extremism and instability, to deal with migration flows and to encourage clean growth," May said.

Investment from France, which maintains close ties with its former colonies in West Africa, stood at 38 billion pounds ($49 billion) and from China, rapidly becoming a major player in Africa, 31 billion pounds (40 billion).

Under the banner of creating a "Global Britain" Trade Minister Liam Fox, a prominent proponent of Brexit, has cited International Monetary Fund research stating that 90 percent of global growth in coming year will be generated outside the EU.