Turkey to prevent use of foreign currencies in real estate sales, rents 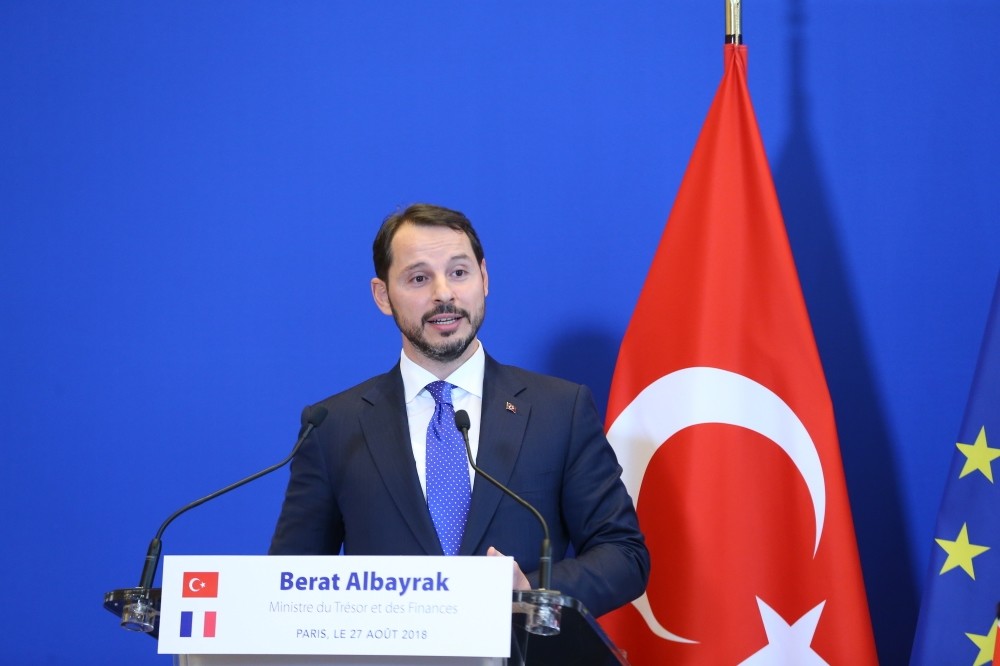 Treasury and Finance Minister Berat Albayrak speaks during a joint press conference with France's Finance Minister Bruno La Maire (not pictured) at the ministry in Paris, France, Aug. 27.
by daily sabah
Aug 30, 2018 12:00 am

Treasury and Finance Minister Albayrak said the government does not see a big risk regarding Turkey's economy or financial system, as he announced that action will be taken to end the era of leasing and sales of real estate with foreign currency

Treasury and Finance Minister Berat Albayrak said that strong countries like Turkey should leave the problem of dollarization behind, and that the government will take steps to prevent foreign currencies from being used for real estate and shopping mall store rent and sales. "A very intensive study has begun in this regard. We will take the necessary steps as soon as possible to avoid leasing and selling in foreign exchange in shopping centers and real estate. There is a sensitive point here. We are working to identify a portfolio associated with some credit risk," Albayrak said.

"We will bring this to the Assembly as soon as possible. There is also a serious demand in society concerned with this issue. Its details and legal processes are currently being studied," the minister added.

Minister Albayrak responded to the questions of press members on his flight back from Paris where he met with his French counterpart Bruno Le Maire.

Albayrak noted that they want to use recent developments in the global process and turn them into opportunities, adding they have talks in September all over the world in a wide range of countries and that talks with a number of countries including France, Germany, Russia, China, Qatar and Britain continue.

"The recent events have made it clear that the dollar is no longer a reliable commercial instrument in the global and financial system. Today, such an intervention in Turkey can happen to others tomorrow. Now you are transforming an instrument, a currency, you have marketed for decades into the world and used for liberal, free market, fair sharing, fair trade, and good cooperation, into a punishing tool for one or more different countries or different economies with a political motive," Albayrak stressed.

Sector representatives in their statements yesterday welcomed the announcement by the minister, saying it will bring a relief to those who had difficulties due to the fluctuations in the exchange rates.

Ali Taylan, the chairman of Turkish Real Estate Advisory Agencies' Federation (TEMFED), said stores in the shopping malls were affected the most from the fluctuations, suggesting that the leasing contracts in foreign currency could be converted into Turkish lira.

Praising the decision, the Confederation of Turkish Tradesmen and Craftsmen (TESK) Chairman Bendevi Palandöken said the end of renting in foreign currencies would be rewarding in terms of the protection of the national currency.

Hulusi Belgü, the head of the Shopping Centers and Investors Association, emphasized the importance of the announcement by Minister Albayrak that the government will protect investors who have funding loans in foreign currency.

Meanwhile, Albayrak and Le Maire on Monday criticized the recent tensions that the U.S. has created with its sanction policies. Albayrak warned that the U.S. was isolating itself from its allies and that Turkey and France have decided to act jointly against U.S. unilateralism.

The unilateral moves by the U.S. targeting Turkey have potential to cause instability in the region, which could in turn feed terrorism and the refugee crisis, he had said, noting that the dollar was losing its status as a global trade tool.

Among others things, the two also discussed acting together at the World Trade Organization on tariffs imposed by Washington on Turkey, European Union and other countries.

Minister Albayrak is now expected to hold meetings with his German counterpart Olaf Scholz next month. The two had also discussed recent developments in the Turkish economy in a phone call earlier this month.

The row between Turkey and the U.S. escalated when President Trump decided to impose sanctions on Turkish ministers Süleyman Soylu and Abdülhamit Gül on Aug. 1 and also increase tariffs on imported steel from Turkey by 50 percent and aluminum by 20 percent, while threatening the country with more sanctions over pastor Andrew Brunson.

Meanwhile, Turkey garnered extensive support from European partners such as France, Germany as well as Russia, China, Kuwait and Qatar who raised their voices to highlight the significance of the Turkish economy that has recently come under attack with the threatening economic showdown initiated by Trump.

Albayrak stated that in light of recent fluctuations, they are looking at sector-based analysis on the relationship between the banking and real sector, conducting stress tests and organizing regular meetings with Banking Regulation and Supervision Agency (BDDK) and banks.

"We have taken very important steps to minimize the impact of these fluctuations on small and medium-sized enterprises (SMEs) and the real sector. We will continue to take steps to further enhance market confidence in the coming period," he continued. "We are satisfied with the strong structure of our banking sector, and we need to be stronger. But that alone does not mean anything. As long as the real sector is strong in the same rate, the banking sector will also see the quality."

"Despite a total attack against Turkey, there was a backlash. This process is entirely political. There is no change in Turkey's economic indicators and basic parameters. Everyone agrees that it was political turbulence. We signed agreements with some countries, and some of them will be commissioned. Different entries started this week about Qatar," the Treasury and Finance Minister added. "This process seems to be a process where we will develop collaborations from which both parties will emerge in a win-win situation in terms of our bilateral relations. In the upcoming period, meaning in days, weeks and months later, not years, we will further improve portfolio and resource diversity. Significant steps will be taken to ensure that the Turkish economy manages these processes more firmly and strongly."

On the question of the biggest risk for Turkey, Minister Albayrak said they do not see a major risk to Turkey's economy and financial system, listing three important features that will minimize the impact on the Turkish economy in global crises. "First of all, Turkey is one of the lowest countries in the world regarding public debt and net debt, so there is no risk in this sense. Second, the household debt ratio is still one of the lowest in the world and does not pose a risk. Third, the financial sector is at a very strong level, and it continues to run smoothly despite all these tests and processes," he said, adding Turkey is at 16 percent regarding capital adequacy point, while the EU limit is 8 percent. "We do not see a risk when these three pillars are strong in Turkey. We aim to evaluate the developments experienced in the global process as opportunities."

Albayrak recalled that 6,100 investors participated in the international teleconference they held after the fluctuations, highlighting that until today, the most intensively participated teleconference had been held in Britain after Brexit with 8,000 people. "[All the] investors who act with political motives will finally lose economically. Turkey is going through a very strong transformation process with its very strong medium-term program, fiscal discipline, structural transformation, industrial transformation, and value-added product production infrastructure," Albayrak said. "All the investors looking at Turkey from this reasonable point of view will profit much more from this picture when they come to 2023 Turkey. Those who do not get on the Turkey train will miss this train."

TURKEY EXPECTS NO PENALTY FOR HALKBANK

Commenting on the ongoing Halkbank case in the U.S., Albayrak said the Halkbank issue has also been used in the background as a manipulation theme by different sections, adding that in compliance with U.S. sanction rules for Iran, foreign trade transactions in Iran were carried out through Halkbank, and the Office of Foreign Assets Control (OFAC) under the U.S. Treasury Department was constantly informed of the role of Halkbank in Iranian transactions and of their trading methods.

Stating that all transactions were compliant and transparent under international law and regulations, especially the international sanctions of the United States, Albayrak suggested that for many years, Halkbank worked with a team of specialists in sanctions and compliance and implemented the issue of sanctions and compliance at the highest level and carried out every transaction with great seriousness and diligence.

"After the review process, in full cooperation to submit the information and documents requested by the U.S. authorities, a contract was signed with the U.S. law firm King and Spalding, and a request was made for the examination of all Iranian-related transactions. Exiger, a U.S. data analysis firm, was also involved in the review conducted with independent audit format," Minister Albayrak explained, stating that all the data, e-mails and relevant documents related to Iranian foreign trade transactions required for the review were submitted to U.S. companies for review. He added that after several months of independent review, it was determined that the bank did not violate U.S. primary and secondary sanction rules for Iran, and that there were no non-transparent practices and methods in Iranian foreign trade transactions.

"These findings, together with proof, were reported to the U.S. authorities through the law firm. It is illegal to even mention the name of Halkbank in this process. We do not expect a penalty for Halkbank. Anything else would be a purely political decision, and we evaluate this political decision as such as the Republic of Turkey," he concluded.