Turkey to provide a cushion against volatility with new financial structure 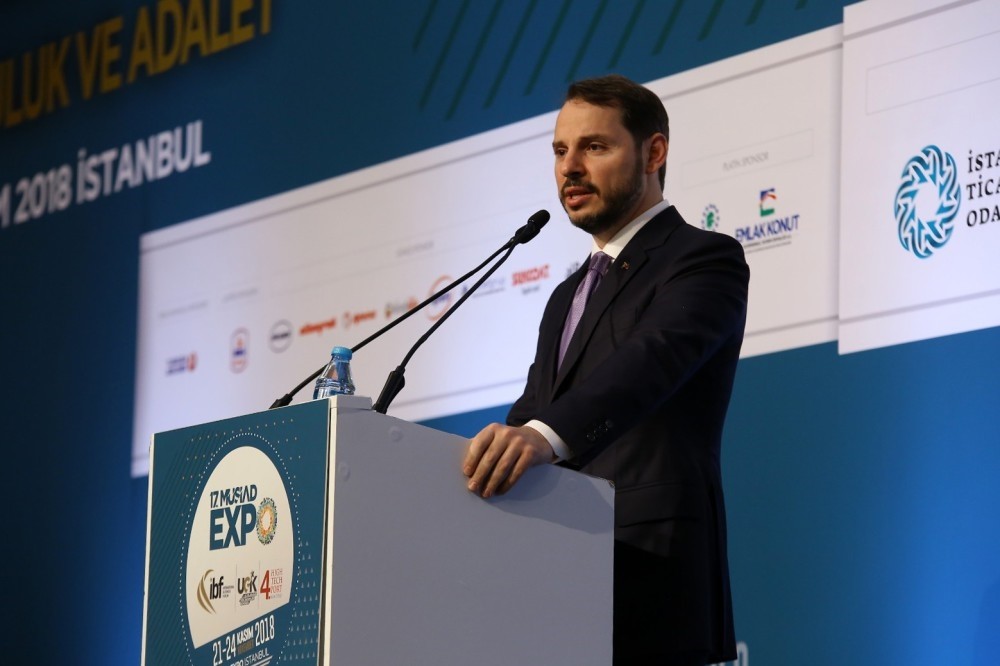 Treasury and Finance Minister Berat Albayrak speaks at the opening ceremony of the 22nd International Business Forum (IBF) in Istanbul, yesterday.
by Daily Sabah Nov 21, 2018 12:00 am

In a bid to resolve the problems of the international monetary system that have surfaced with the recent global volatility affecting Turkish assets, Turkey is working on a new structure to strengthen its markets against fluctuations

The process Turkey has gone through over the last few months should be considered a clear reflection of the problems in the international monetary system, according to Treasury and Finance Minister Berat Albayrak. The monetary system, which is dominated by a single currency, should be diversified through regional cooperation between countries and thus, financial risks should be minimized, Albayrak said yesterday in his address at the International Business Forum's (IBF) opening ceremony in Istanbul. Albayrak stressed Turkey is working on a new financial architecture to promote and deepen capital markets in the country.

"The economic maneuvers undertaken against Turkey in August and September directly targeted our currency, the Turkish lira, and our country's economic stability," Albayrak said. The minister emphasized that this operation failed due to Turkey's strong will, adding that, with its strong economic infrastructure, political stability and leadership, Turkey is continuing its path with firm steps. Showing a surplus for two consecutive months in August and September, Turkey is now expected to see a "record" current account surplus in October, according to Albayrak. For the first time in the past three years, Turkey's current account balance posted a surplus in August – totaling $2.59 billion, improving sharply from a $923 million deficit in the same month last year.

The improvement maintained its trend in September, when the country's current account balance showed a surplus for the second consecutive month this year. Turkey's current account surplus totaled $1.83 billion, improving from last year's deficit of $4.4 billion.

Meanwhile, the government on Sept. 20 announced the New Economic Program (NEP) as a framework with a vision to battle the existing problems in the Turkish economy, including currency volatility, running inflation and a double-digit deficit, and set targets that are based on Turkey's macroeconomic realities, hence reassuring market confidence in the Turkish economy.

The program also included a series of measures and steps to provide fiscal discipline and boost productivity and savings.

In his address, Albayrak said Turkey, which recently faced currency shocks, entered a process of normalization as of October.

The minister noted that they have seen a recovery in the exchange rate and credit default swap (CDS) premiums as well as bond interest rates, adding that the country is progressing further in its recovery process.

The realistic targets they put forward in the NEP have started to show in the last quarter of this year, according to Albayrak, adding that they were welcomed by the market and investors.

"Our budget revenues have reached a good level at a point that exceeds expectations set in the program. At this point, while our expectation of TL 630.5 billion tax income continues in the same, we expect that we will surpass the target of TL 119 billion [$22.1 billion] in nontax revenues," he noted.

After three months of hard currency volatility, Albayrak said the economy administration has now put the fight against inflation at the top of their policies and is focused on two main issues, the first being strengthening the real sector and the banking sector, and the second being budget discipline.

"We will continue to take steps without compromising the budget discipline and without damaging our country's strong positive perception in the global markets. As of today, our year-end budget balance targets are being carried out safely as planned. On the other hand, we continue to take steps to minimize the effects of the stagnation in the European markets and the exchange rate volatilities on our real sector and banks," Albayrak said.

Turkey's inflation figures will be close to its targets in November and December, Albayrak said.

The inflation increased by 25.24 percent year-on-year

Over the past five years, the annual inflation saw its lowest level at 6.13 percent in April 2013, while the figure reached its highest level this October.

In order to curb inflation and ensure a balance in the pricing behaviors, the Treasury and Finance Ministry launched a full-scale campaign in early October with the support of the private sector.

Furthermore, Albayrak also said loan interest rates dropped below the 25 percent level and will drop even further in December, adding: "We will continue to take strong steps without compromising the budget discipline."

Earlier this month, the U.S. lifted sanctions on two Turkish Cabinet ministers, which were placed in September for not releasing American pastor Andrew Brunson, who was being tried in Turkey on terror charges. The pastor was released last month.

The relations between Ankara and Washington went through a turbulent period, especially over the last few months. The tariffs and sanctions affected the U.S. dollar-Turkish lira exchange rate, which had lost nearly half of its value against the greenback in the said period. The dollar-lira exchange rate recovered recently and was trading at 5.36 yesterday afternoon.

The 22nd International Business Forum (IBF) Congress was organized under the 17th Independent Industrialists and Businessmen's Association (MÜSİAD) EXPO, which is kicking off today. The IBF, established in 1995, provides a trustworthy global business network, especially for Muslim businesspeople.

Albayrak said such an organization, which is bringing together people and companies from around 150 countries from around the world, has a great importance for Turkey.

In his speech, the treasury and finance minister also pointed to

the global developments such as the increase in the financial costs, as well as spread of protectionist policies and the rise of customs "walls."

"We are face to face with the increasing risk of instability in the global economy due to trade wars that we have frequently witnessed, especially in the recent period," Albayrak warned.

Explaining that this possible instability seriously threatens the growth rates of both the world economy and global trade, Albayrak said the increase of financial costs and protectionist economic policies pose serious risks, particularly for developing countries.