Finance minister: Turkey's economic diplomacy to be further strengthened in 2019 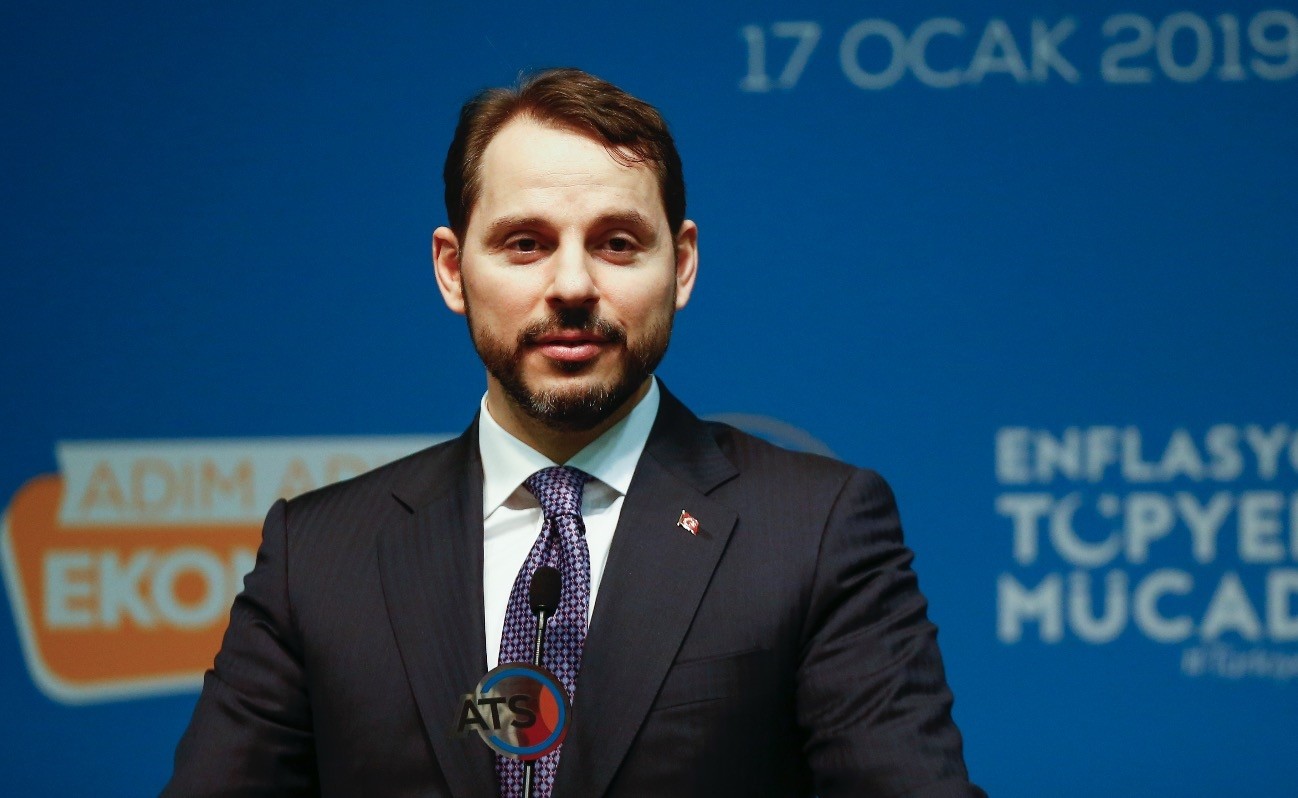 Treasury and Finance Minsiter Berat Albayrak at an event attended by representatives of the Turkish business world in Antalya, Jan. 17.
by Daily Sabah Jul 02, 2019 2:48 pm

Besides firmly sticking to its monetary and fiscal discipline in the domestic market, Turkey will be strengthening its economic diplomacy in 2019, with Europe being its top priority, Treasury and Finance Minister Berat Albayrak said

This year all the damage caused by the speculative fluctuations in August and September of 2018 were eliminated and the rebalancing will make itself strongly apparent with all its components, according to Treasury and Finance Minister Berat Albayrak (L). Speaking yesterday at an event in Antalya attended by business world representatives, Albayrak said 2019 will be a year in which economic diplomacy will be further strengthened. "It will be a period in which we will further strengthen our industrial and trade cooperation to achieve our export targets, increase the market and product variety, reduce dependence on imported intermediate products and further increase the production of high-value-added products," Albayrak said.

He emphasized that trade volumes with countries like China and South Korea are not propitious for Turkey. "We say we are looking for win-win, but there is a picture against Turkey in trade with China or South Korea. Then this picture is not going to work like this… Either we will win together or we will take other steps. Turkey should put forward a win-win trade cooperation in relation to exports and value added," Albayrak said.

Europe will continue to be a priority for Turkey, according to the minister, who noted that the country will make much more rational, determined and strong cooperative steps to strengthen commercial, economic and political ties with the European Union.

Turkey's exports to the European Union totaled $84 billion in 2018 and its imports were recorded at $80 billion, according to the data of the Trade Ministry.

"We will move forward with a mutual win-win relationship. This year will be a year in which the welfare of our citizens is increased to a much higher level with strong economy diplomacy," Albayrak noted.

The minister said the government was launching an intense process to write a new economic leap, a new story, noting that it would be put together with the business world, producers, tourism professionals, industrialists, state and public institutions in every sense.

Indicating that they have two delicate fragile issues in their hands to deal with, Albayrak said they will manage this process sensitively without risking anything. "One is sensitive management in the monetary and fiscal policies we will firmly implement, the confidence we created in the global system. The other sensitive point is we will manage this balance together without ignoring the sensitivities of the industrialist business world."

Albayrak said he hopes the country will, with a much stronger reflex, end 2019 at a better point with the inflation being below the targets set for 2019 by making much stronger steps.

Consumer prices in Turkey preserved a downward momentum in December and fell to 20.3 percent, recording a 0.4 percent decrease from 21.62 percent in November, according to data by the Turkish Statistical Institute (TurkStat).

Inflation dropped for the second month in a row, in line with the expectations of the government and the markets. Albayrak emphasized that the target for consumer prices was achieved with the said figures.

"We will continue to make necessary steps. We will continue to protect our tight monetary policy. We will continue to take necessary steps in the fiscal area to combat inflation. We are continuing the excise duty [ÖTV] and value-added tax [VAT] discounts we initiated to contribute to employment, to stimulate markets and to strengthen the fight against inflation," Albayrak stressed. "All these positive developments show that we still have a serious area to go at the cost point. This is why we made our call for the continuation of the fight against inflation for three more months, to maintain solidarity and to make this consciousness permanent."

The all-out fight against inflation initiative that Minister Albayrak announced in October facilitated the reduction of inflation with the expansive support of the public and private sector. The number of corporations and institutions that participated in the program by reducing their prices has exceeded 25,000 by the latest numbers.

Furthermore, in addition to mitigating the inflationary pressures, the Treasury and Finance Ministry also announced tax reductions in the sales of properties, furniture, automotive and home appliances at the end of October.

The treasury and finance minister yesterday noted that bond interest, which was at the level of 27, fell down to 18-20 in January, pointing to the determination to bring this figure further down to single digits.

The government will increase the variety of borrowing instruments, Albayrak said. "We have started negotiations for the issuance of Samurai bills in Japanese Yen."

Also, he said they put the growth expectation below potential growth for the next few years for healthy, sustainable and balanced growth. He noted that their first goal is to eliminate any fragilities in the economy.