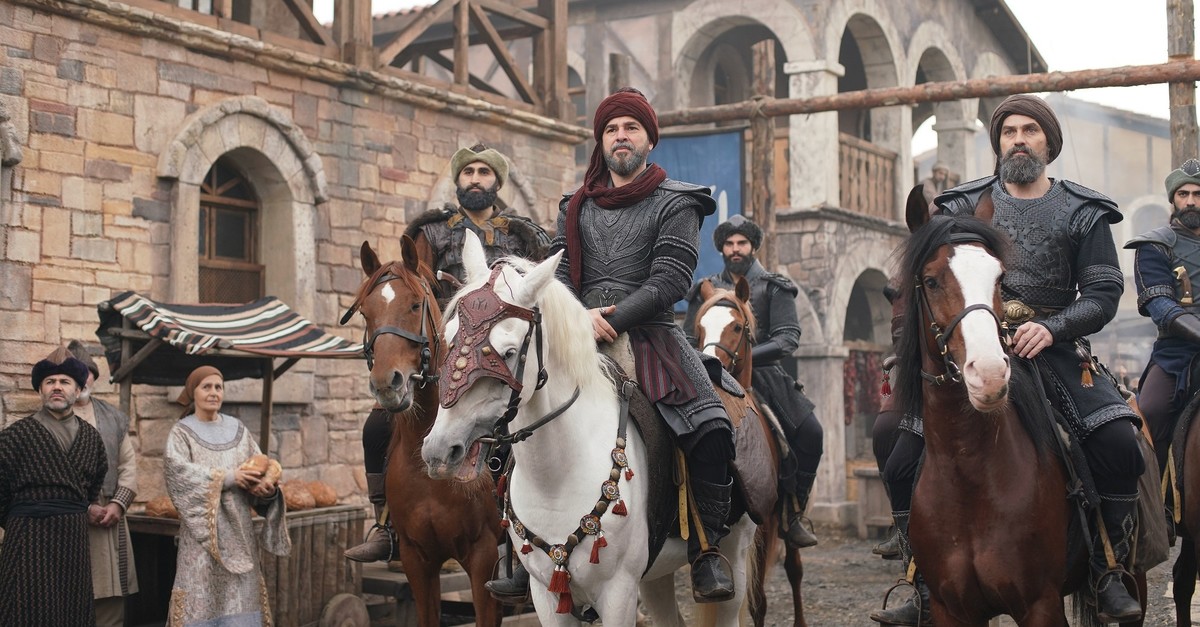 Turkish TV series are currently being screened in more than 140 countries around the globe.
by Daily Sabah with AA Mar 11, 2019 11:03 am

Demand in Arab countries for Turkish dishes and accessories has been booming due to the effects of Turkish TV series, watched by hundreds of millions of people worldwide

Being aired around the world to over 1 billion viewers, wildly popular Turkish TV series and films have now led to a boom in e-exports to Gulf countries. Turkish shows, which promote Turkish culture, tourism and products, are currently aired in more than 140 countries and have reached export figures of over $350 million per year. Turkey ranks second in global TV series exports – trailing only Hollywood. Bazarea, founded by the entrepreneurs Eyüp Kerem, Selamet Arslan and Ahmet Arslan, has a hard time meeting the demand of 200 million e-commerce users in the Arab region for Turkish baklava, Turkish delight and Turkish coffee as well as hats, prayer beads, rings and accessories similar to the ones used in one of the most popular Turkish TV series, "Diriliş: Ertuğrul" ("Resurrection: Ertuğrul").

Eyüp Kerem said, after realizing that all segments of the society were adapting to e-commerce while studying in Ireland, he turned his focus on promoting Turkish brands to the Gulf and to micro-exports.

He noted that e-commerce users in the Middle East are more interested in Turkey's cultural values than other regions, highlighting that Turkey has an exclusive brand value.

"There is an incredible interest in certain products, especially in those coming from our culture," he continued. "We, as Bazarea, have entered the Gulf market with Turkish gastronomy, Turkish cuisine, cosmetics and Turkish accessories."

Giving further information on Bazarea's services, Kerem said Bazarea is a platform that offers Turkish branded products abroad within the scope of micro-exports, adding that it enables people to easily log in from abroad and make their purchases in a short time and receive their deliveries within three to five days.

Recalling that the platform has been active for only two months, he further stressed they focused on the huge gap in the field of e-exports but did not expect a demand three times the expectations in two months.

"We will continue to export Turkish brands to the world by strengthening our operations and expanding our categories," he added. Kerem said the most demand for Turkish products come from Saudi Arabia, adding that there are around 10 million e-commerce users in the country with a population of 32 million.

Explaining that e-commerce users in Saudi Arabia are mainly high-income customers, he pointed out that there is great interest in Turkish products from Saudi Arabia.

"In our platform, baklava and Turkish delight draw interest in particular. We are selling the licensed products of [state broadcaster] TRT series "Resurrection: Ertuğrul" and "Payitaht Abdülhamit" ("The Last Emperor") on our web site and mobile application," he said.

He noted the demand for accessories has been booming due to the effects of Turkish TV series, noting they have increased the sales of the licensed products of the TRT series.

Explaining that the "Resurrection: Ertuğrul" series reaches around two billion people in the world, especially in the Arab region and South America, Kerem said they are creating global brands just like Marvel and Disneyland.

Further elaborating on their suppliers, Kerem said CEO Ramazan Çıplak focuses on products in the "Resurrection: Ertuğrul" series, such as Ertuğrul's ring and hat and Abdülhamid's pocket watch, while sending them directly to the entire Arab region.

After Saudi Arabia, he stated that there is interest in their products from the United Arab Emirates (UAE), Bahrain and Kuwait, as well as a high demand for wholesale purchases from Oman, underlining that Bazarea's web site and mobile application that serve in English and Arabic see high demand from all over the world. "We sent baklava to Ohio in the United States in three days. We also sent it to Denver and to New York. However, we saw that we could not focus on both the Gulf and the U.S. side at first. Therefore, we intensified our entire advertising strategy in the Gulf countries," he explained.

Kerem added they do not hesitate to compete in the market and pointed to the size of the market with hundreds of millions of buyers.

With regards to the population of the Arab region, Kerem informed that there are more than 200 million e-commerce users in the whole Arab geography along with sub-Saharan Africa, adding that even though all of these users are not interested in the country, at the end of the day, there is a customer profile that can buy from Turkey.

"Considering the e-commerce sites in the region, we see that there is nothing produced in these channels. Most of the countries do not produce anything. Almost everything comes from outside. The variety of products also seems limited. That is why we are in a position to compete with e-commerce sites in that country," he said. "All of the 200 million customers we have mentioned are our target market. However, we have a target audience of 30 million, including 10 million from Saudi Arabia and 6.7 million from the UAE.

Kerem said that they have implemented their projects despite the criticism of many people.

"The logistics industry and Turkish food producers have now achieved many innovations in this area. We deliver the products to the buyers with the option to pay at the door before their products go bad," he noted. "In fact, cash on delivery sounds crazy. Even when we do not dare to pay at the door here, we are sending baklava to a village in Saudi Arabia with that option. However, we have minimized the risks with a number of systems developed in-house. We will make a very nice opening soon in the Iraqi market."

Kerem remarked that they move quite slowly in some Arab countries due to the inadequate development of their delivery and banking systems, and they focus on countries with available potential and regulations in this regard.