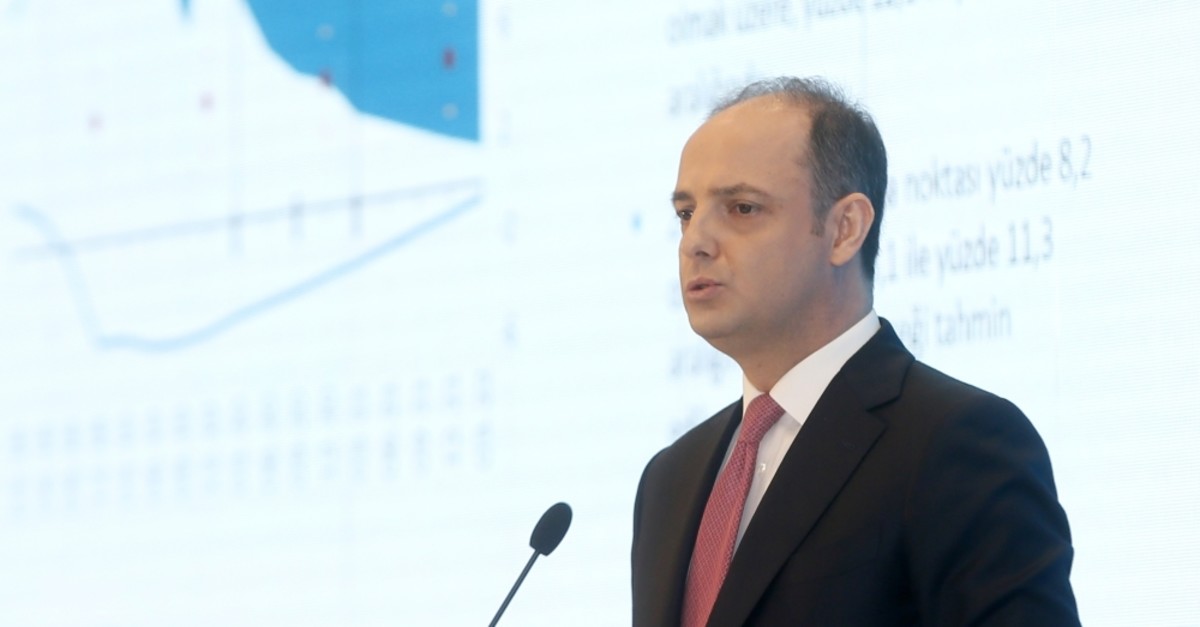 Central Bank of Republic of Turkey (CBRT) Governor Murat u00c7etinkaya speaks during the release of the quarterly inflation report, Istanbul, April 30, 2019.
by Daily Sabah with AA May 01, 2019 12:10 am

The reserves of the Central Bank of the Republic of Turkey (CBRT) have been a widely discussed issue recently, and the bank vowed to clarify the issue during the release of its quarterly inflation report Tuesday. The CBRT is one of the most transparent central banks in the world, sharing its balance sheet on a daily basis and reserve data every week with the public. Murat Çetinkaya, the central bank's governor, stressed the importance of maintaining a comprehensive briefing on the reserves during his speech yesterday. "The CBRT continues to share reserve data in line with the best practices in international markets. We also announce our balance sheet daily," he said. "We also disclose data on subitems that affect the development of reserves on a regular basis. We set an example about transparency for the best practices in the world."

The fluctuation in reserve figures is not exceptional. It is not specific to the recent period, and it is not unusual. Fluctuations might occur in our foreign exchange reserves," Çetinkaya said.

"One of the most decisive factors in these fluctuations is the fact that various liquidity instruments we offer to banks are used by our banks in different densities depending on market developments," he explained in detail and noted that the central bank conducts reserve communication through gross reserves. He expressed that the central bank is committed to raising its foreign reserves.

Even though short-term volatility in reserve data is observed due to cyclical developments and monetary and exchange rate policy implementations, the central bank predicts that international reserves will maintain their upward trend in the upcoming period, he noted.

Recalling that the bank's reserve adequacy indicators are defined through total reserve assets, he continued: "Considering the tendency of households and firms to structurally choose foreign currency deposits in the banking sector, it is important to consider not only official reserves, but also the foreign currency assets of the banking system and companies in assessing the adequacy of the country's foreign assets kept in the face of external liabilities as a whole."

Moreover, the positive course of export and tourism revenues as well as the balancing process in the current account are expected to lead to significant improvement in reserve adequacy indicators. As a result, although short-term volatility is seen in reserve data due to cyclical developments and monetary and exchange rate policy implementations, it is predicted that international reserves will maintain their upward trend in the upcoming period.

Indicating that significant rises could be seen in the upcoming months despite the periods of decline, Çetinkaya said, "Here, the critical point is: We recommend that it will be better to look at trends and the medium term with a distinction of broad reserve qualification metric."

Çetinkaya also touched on swaps, continuing, "While using these instruments, we know their impacts on reserves; however, we do not deploy such instruments like swaps to make an effect on the reserve quality."

The market squeeze at that time was a step taken to support market stability and effective functioning in the face of the big gap between offshores and offshore interest rates and the market anomaly.

Turkey's central bank yesterday kept the country's year-end inflation forecasts at 14.6 percent this year, 8.2 percent next year and 5.4 percent in 2021.

The inflation rate will fluctuate between 12.1 percent and 17.2 percent through the end of this year, the bank's governor said at a news conference.

Saying that the improvement in the current account balance will continue in the coming days and a partial recovery in economic activity was seen in the first quarter, Çetinkaya added: "We project the inflation rate will stabilize at 5 percent in the medium term under a tight monetary policy stance and enhanced policy coordination."

"Taking into account hikes in unprocessed food and Turkish lira-denominated import prices, the improvement in the underlying trend of inflation under a tight monetary policy stance consistent with the targeted path, the widening of the output gap and downward revisions to the administered price hikes offset these upward effects," Çetinkaya said. "Assumptions for food prices inflation have been revised upwards due to realized inflation figures in the first quarter of the year that were significantly above the historical averages as well as to risks arising mainly from accumulated cost pressures," he said.

The bank increased its food inflation forecast to 16 percent for 2019, up from 13 percent in the previous report, Çetinkaya noted. Food inflation next year is expected to reach 11 percent, he said.

"The forecasts are based on a framework which increases in the country's risk premium and financial volatility since the previous report period would be partially recovered and no additional shocks would be felt," he said.

Stating that crude oil prices in international markets in the first quarter exceeded the assumptions in the January Inflation Report, the governor said: "The average crude oil price assumption of $63.10 presented in the previous report has been revised upwards to $67.80 for 2019."