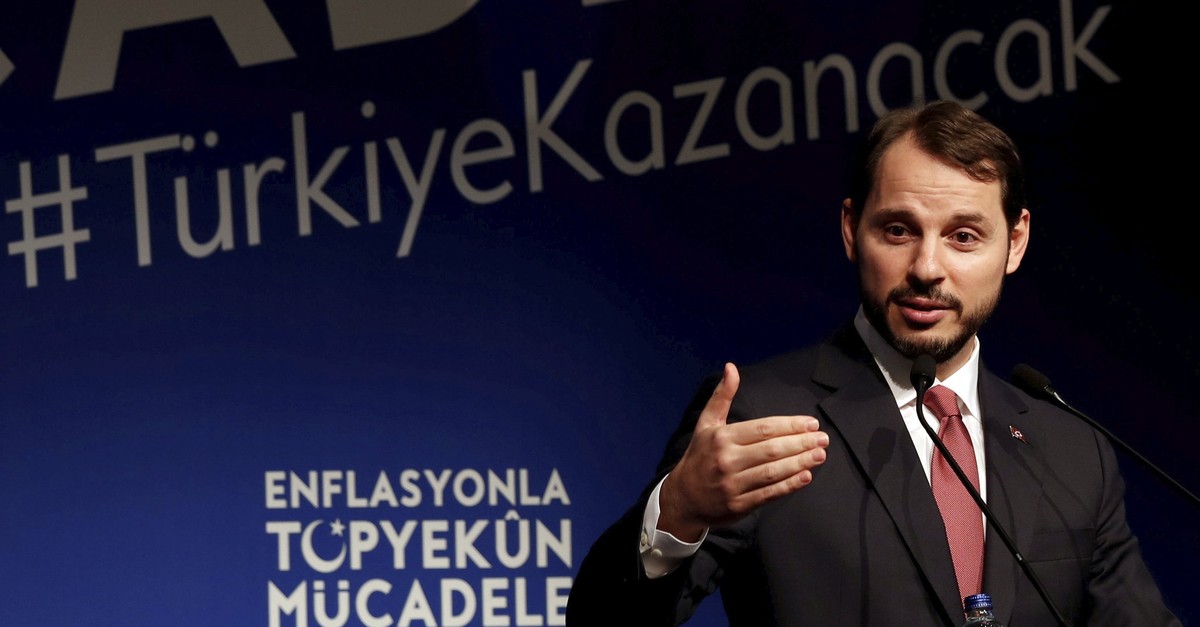 Treasury and Finance Minister Berat Albayrak speaks during an event to announce the governmentu2019s Full-Scale Fight Against Inflation program in Istanbul, Oct. 9, 2018.
by Daily Sabah May 13, 2019 12:06 am

Turkey will reach a much better point by end of this year, particularly in inflation, where it will be seeing a significant decline in the coming months, according to Treasury and Finance Minister Albayrak

Having struggled with high inflation for the last year, Turkey has been seeing an improvement over the last couple of months due to the measures and structural steps taken by the government to eliminate rigidity in prices. Consumer prices in Turkey declined in April and came in below market expectations. Turkey's annual inflation rate fell to 19.5 percent in April, down from 19.71 percent the previous month, according to the Turkish Statistical Institute (TurkStat). Turkey will have reached a balanced and solid point at the end of 2019, particularly in inflation and employment, Treasury and Finance Minister Berat Albayrak said.

Inflation will "decline significantly" in the coming months, Albayrak said in an interview broadcast live on CNN Türk television yesterday. The minister said inflation was already on a downward trend thanks to base effects, while the summer months will bring "increased foreign currency revenues via tourism." The fact that annual core inflation dropped to 16.3 percent in April from 17.53 percent a month earlier was seen as a significant decline. The highest price increase last month was seen in food and nonalcoholic beverages, up 31.86 percent on a yearly basis. TurkStat data shows that the 12-month average hike in consumer prices was 19.39 percent as of this April. As noted in the new economic program announced last September, the country's inflation rate target is 15.9 percent this year, 9.8 percent in 2020 and 6 percent in 2021. In its quarterly inflation report, the Central Bank of the Republic of Turkey (CBRT) kept the country's year-end inflation forecast at 14.6 percent this year, 8.2 percent next year and 5.4 percent in 2021.

As noted in the bank's quarterly inflation report, the figure is expected to fluctuate between 12.1 percent and 17.2 percent through the end of 2019.

Albayrak further emphasized that Turkey has been going through a very historical period, especially in economic terms, and that it has faced "a great challenge" economically in the last six years. He noted, "We have undergone a process in which Turkey has been subjected to very intense economic attacks on different fronts."

He recalled that they expressed the need for a structural transformation and strong financing architecture in the Turkish economy following speculative volatilities in August last year.

"At a time when the dynamics in the domestic market were severely deteriorated, we began to take steps to enter a more stable process with the new economic program," he continued. "As a matter of fact, interest rates have fallen to 20 percent at this point. These figures, which are still high, are falling and will continue to do so. The most important indicator of this is inflation. With these fluctuations, with the effect of food and different items on inflation in the first three to five months, the gradual declines did not result in an increase at the very least, albeit at a slower pace. We will experience much sharper declines, especially in the next few months because the sharp declines in inflation will reveal a much stronger balancing process with interest."

Minister Albayrak also said they will be announcing a new support package for the manufacturing and export sector with three public banks. "In May or June, we will reveal a long-term, Turkish lira-based and low-cost package that will positively affect the production capacity in sectors related to Turkey's import dependency," he noted.

The minister emphasized: "We will support exports, while lowering imports. We have taken very decisive steps in financial terms. In the near term, we will be launching the joint operation of ATMs. We will start with our public banks, and our private banks want to be a part of the process as well."

Albayrak said that the current account balance and surplus were in a period of rapid recovery and that there would be no external financing requirement in the next period. Pointing out that they have made significant arrangements in the financial architecture in Turkey in the last eight months, Albayrak said that they took steps to minimize the impact of external factors on the economy.

"The current account deficit nearly hit $60 billion last year. By the end of [May], it will nearly be zeroed. We took steps to minimize external factors' impact on the economy," he added.

Elaborating on the call for employment mobilization, the minister said based on social security registrations, at least 520,000 more people became employed in March and April.

He stressed that the economy is moving forward with firm steps and that there will be a positive period in micro and macro terms, especially concerning inflation and employment.

Noting that Turkey will continue to pursue solution-oriented politics, he said that despite the attacks and pressures, public awareness is high and that they will take rapid steps in the non-electoral period that will last more than four years.

Highlighting that the negative impact of the fluctuation in foreign exchange rates on citizens is less than before, Albayrak said they are aiming for a more intensive and Turkish lira-based process. Pointing out that the fluctuations affect importing companies, in particular, he said they entered a more positive process in tourism, agriculture and the current balance.

Albayrak also indicated that the real sector has been going through a challenging process for the last eight to 10 months, adding that work for the tax architecture is in progress to make the sector more competitive and that they have taken significant steps with the tax council in this regard.