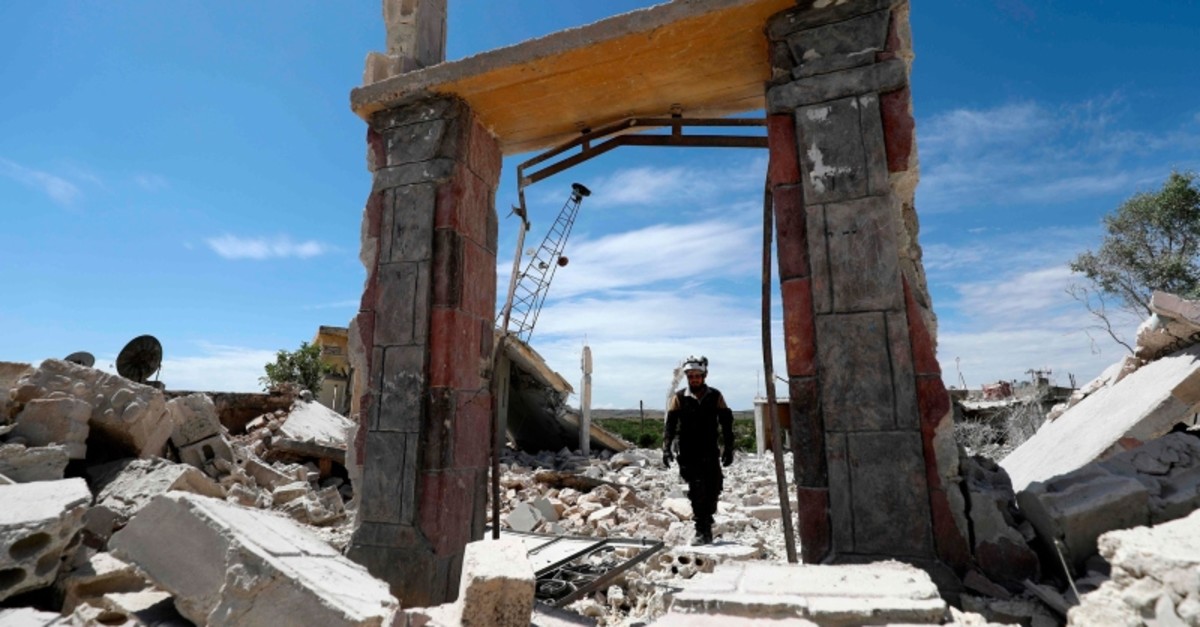 A member of the Syrian Civil Defence (White Helmets) inspects the rubble following shelling by Assad regime forces and their allies on a the village of Maarit Sin in the countryside of Idlib province on May 11, 2019. (AFP Photo)
by Daily Sabah with Wires May 13, 2019 4:49 pm

Britain, Germany and France called on Monday for an end to the military escalation in north western Syria's Idlib, saying they were gravely concerned at recent violence which had led to the death of more than 120 civilians.

"This military escalation must stop," the joint statement from the three countries, issued by Britain's Foreign Office, said.

"Airstrikes on population centers, indiscriminate bombardment and use of barrel bombs as well as the targeting of civilian and humanitarian infrastructures, notably schools and health facilities, are blatant violations of International Humanitarian Law."

Assad regime is preparing an offensive in northwestern Syria's Idlib following eight months of calm provided by the Sochi deal reached between Turkey and Russia last September, which will likely cause new bloodshed and a wave of migration in the province.

Syrian activists said the regime expanded its ground offensive on the outskirts of Idlib and Hama provinces over the weekend and took control of new villages amid calls to adhere to the cease-fire reached in the Sochi deal.

The Britain-based Syrian Observatory for Human Rights confirmed that regime forces, which focused on areas at the southern edge of the last opposition stronghold Idlib, gained new ground.

According to various nongovernmental organizations, the Assad regime and Russian forces have dropped more than 3,000 bombs on Idlib in the past two weeks, which has led to the deaths of nearly 150 people and injured 248 others.

Fleeing the intense airstrikes, approximately 100,000 new refugees have arrived at the Atmeh camp near the Turkish border in the last 20 days. It is estimated that nearly 800,000 people are being sheltered in tents and villages around the Atmeh camp.

Idlib is the opposition's last refuge. Its pre-war population of 1.5 million has swelled to around 3 million after it was designated a "de-escalation zone" under the Astana agreement between Turkey, Russia and Iran in May 2017, to pave the way for a permanent political solution in Syria. Tens of thousands of Syrians trapped in other parts of the country were evacuated there under various cease-fire agreements.