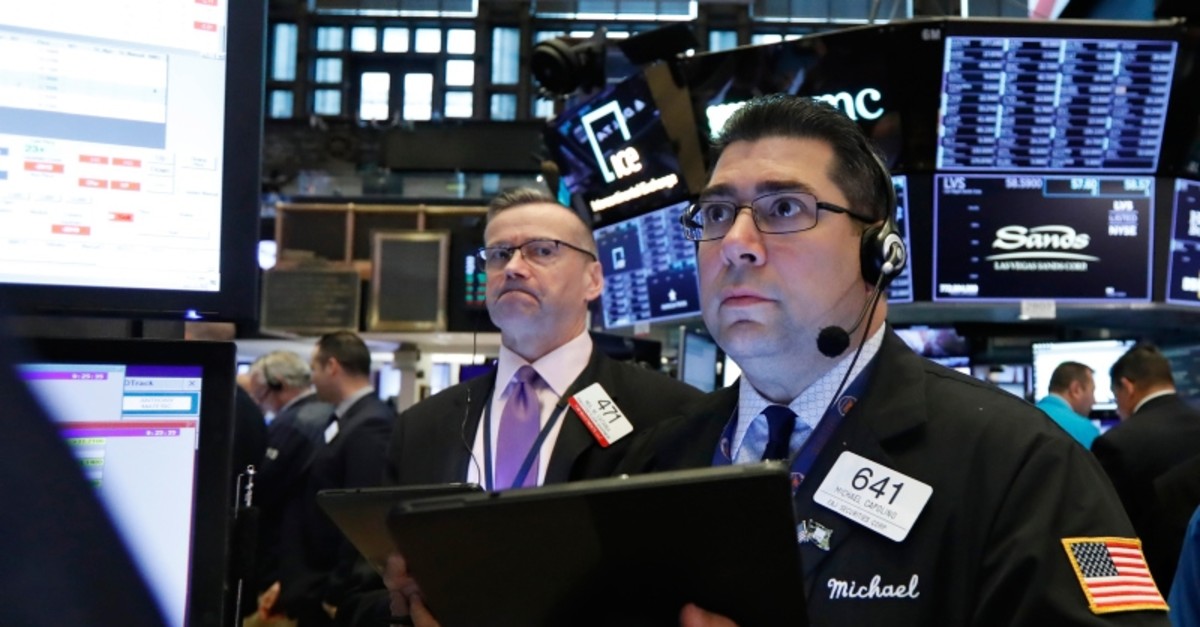 In New York, stocks extended their losses after Chinese officials berated Washington for "bullying" Beijing, suggesting the two sides were no nearer to a resolution in their trade war.

Meanwhile, a rally in bonds drove down yields and hit financial industry stocks, with the 10-year Treasury touching its lowest level in 19 months, and a sudden dip in oil prices sank shares in oil producers.

In yet another bad sign, the IHS Markit flash manufacturing survey fell to a nine-year low.

"For once, investors are not just reacting to tweets and ambient noise from the trade negotiations," Gregori Volokhine, fund manager at Meeshaert Financial Services, said of the weakness in manufacturing.

"These fresh indicators are the first sign we may be approaching an inflection point in American growth."

After paring some losses, all three major Wall Street indices fell more than one percent, putting the Dow Jones Industrial Average on track for a fifth straight week in the red.

In Europe, voting kicked off across the continent in a contest in which rising populist forces are hoping to make significant gains, threatening EU integration.

Britain's EU poll is an ironic twist for a country that decided almost three years ago to leave the bloc and whose leader had vowed to avoid the vote.

Further dampening the mood was gloomy economic news: a survey showed German business confidence in May hit its lowest level in more than four years.

London's FTSE 100 index lost 1.4 percent at the close after the government postponed a crucial Brexit vote following an outcry from hardline Brexiteers over concessions made by May -- who faces intense speculation over her future.

The pound hit another four-month low as May faces being ousted over a revised plan to push through her Brexit agreement, which sparked the resignation of Cabinet member Andrea Leadsom.

"In particular, fear of a tech war or even a cold war between the US and China is now receiving greater attention."

Tensions between China and the US have increased after Donald Trump banned telecoms giant Huawei from the US market and prevented American firms from selling to it.

The move has led a number of companies around the world to cut back their business with the firm, including Google, Japan's Panasonic and EE in Britain, among others.

In Asia, Mumbai's Sensex soared more than two percent to break 40,000 for the first time ever as traders welcomed polls indicating business-friendly Prime Minister Narendra Modi's BJP was on course to win another majority.