Ankara, London look to enhance ties regardless of Brexit outcome 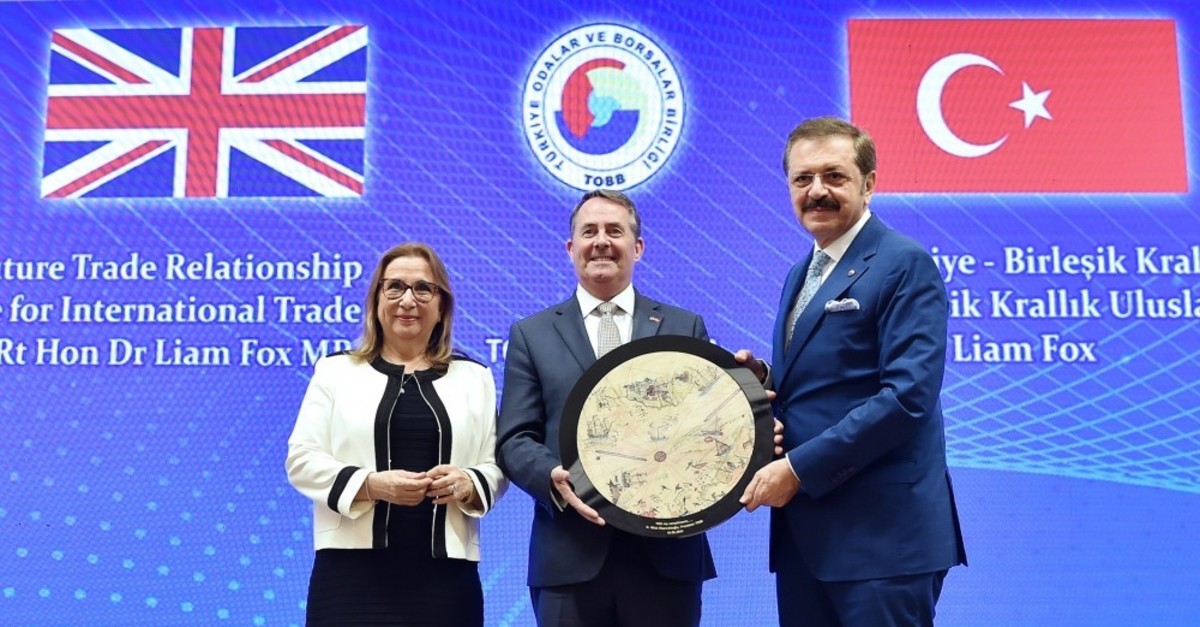 Having already strong relations, Turkey and the U.K. are now eager to further improve bilateral economic ties, regardless of ‘deal' or ‘no-deal' Brexit

Turkey and the U.K. look to boost bilateral ties in the upcoming period, regardless of the latter's exit from the EU with or without a deal.

Trade Minister Ruhsar Pekcan and the U.K. Secretary of State for International Trade Liam Fox discussed trade and investment relations as well as cooperation opportunities between the two countries, particularly in the post-Brexit period.

In her address, Pekcan said Turkey will continue to enhance economic relations with the U.K., regardless of the latter's exit from the EU with or without a deal. She, however, emphasized that Turkey expects Brexit with a deal, which would be favorable for both sides.

Pekcan said relations between Turkey and Britain have a very long history. "The U.K. is one of the founders of the global economy. As Turkey, we want to improve our economic relations with the U.K., especially in the Middle East, Africa, Central Asia, the Balkans and the Far East."

The U.K. is among Turkey's top trade partners – the second-largest market for Turkish products and the seventh largest source for the country's imports.

Last year, Turkish exports to the U.K. amounted to $11.1 billion while its imports from the U.K. totaled $7.4 billion. Over the last decade, the bilateral trade volume between the two countries surged from $9.4 billion to $18.5 billion.

In the same period, Turkey attracted $7.2 billion foreign direct investment from the U.K. while Turkey's overseas investments in the country totaled some $2.5 billion.

"Hopefully, we will raise these figures even higher, and we intend to deepen our trade relations with the U.K. and increase our trade volume and mutual investments," Pekcan added, touching on the worrisome environment created by Brexit-related uncertainties among Turkish business circles.

Recalling that five meetings had been held with the British trade working groups since 2016, Pekcan said their technical teams were to hold the sixth meeting today, adding that the teams will work on how to deepen trade agreement with the U.K. post-Brexit.

"Our goal is to increase the continuity of this trade. Regardless of a Brexit deal, we will work on how we can contribute to our business relationship. Of course, our expectation is in the direction of a Brexit deal," she continued, pointing out that they were waiting for steps to be taken in the U.K. Parliament regarding the arrangements after Oct. 31, 2019. "A no-deal Brexit will have a negative effect on our business world. Turkey's exports are expected to decline by around 25 percent," Minister Pekcan added.

Touching on the services, financial and insurance sectors as other areas of agreement to dismiss the possible adverse effects of Brexit on Turkey, Pekcan recalled that Türk Eximbank and the U.K. Export Finance signed an agreement. "Now one of our major companies is realizing a joint power plant project in Iraq," she noted. "We also believe that our cooperation opportunities will continue to increase by taking into account Turkey's achievements in risky geographies in the Middle East, Africa, Central Asia, Caucasus, the Balkans and even the Far East."

'BREXIT IS AN OPPORTUNITY, NOT A THREAT TO UK-TURKEY TIES'

In his address at the meeting, the U.K. Secretary of State for International Trade Liam Fox said the ties between the two countries are deemed more important after Brexit, adding that Turkey has become one of the U.K.'s most important trading partners in recent years.

Underlining that they attached great importance to the relations between Turkey and the U.K., located at both ends of Europe, Fox said that as a country leaving the EU, these relations now became more important.

Fox said 44 percent of the U.K.'s exports went to the EU, highlighting the importance of a reasonable deal not to damage the relations with the EU. "Brexit is an opportunity, not a threat to our relations with Turkey," Fox noted, adding that they made significant contributions with Turkey to the world in terms of global trade and regional security. "The basis of our relations will never change. We will always stand against the protectionist trade policies," Fox added.

Rifat Hisarcıklıoğlu, head of Turkey's Chambers and Commodity Exchanges Union (TOBB), said nearly $10 billion of the U.K.'s investments in Turkey is the most concrete indicator of confidence in the country's economy and future.

He underlined that Turkey and the U.K. are important trade and investment partners.

"We expect Brexit with or without a deal will not have a negative impact on bilateral economic relations between Turkey and the U.K.," Hisarciklioglu said. He called on the two countries to sign a free trade agreement, saying it will be the "best commercial model."