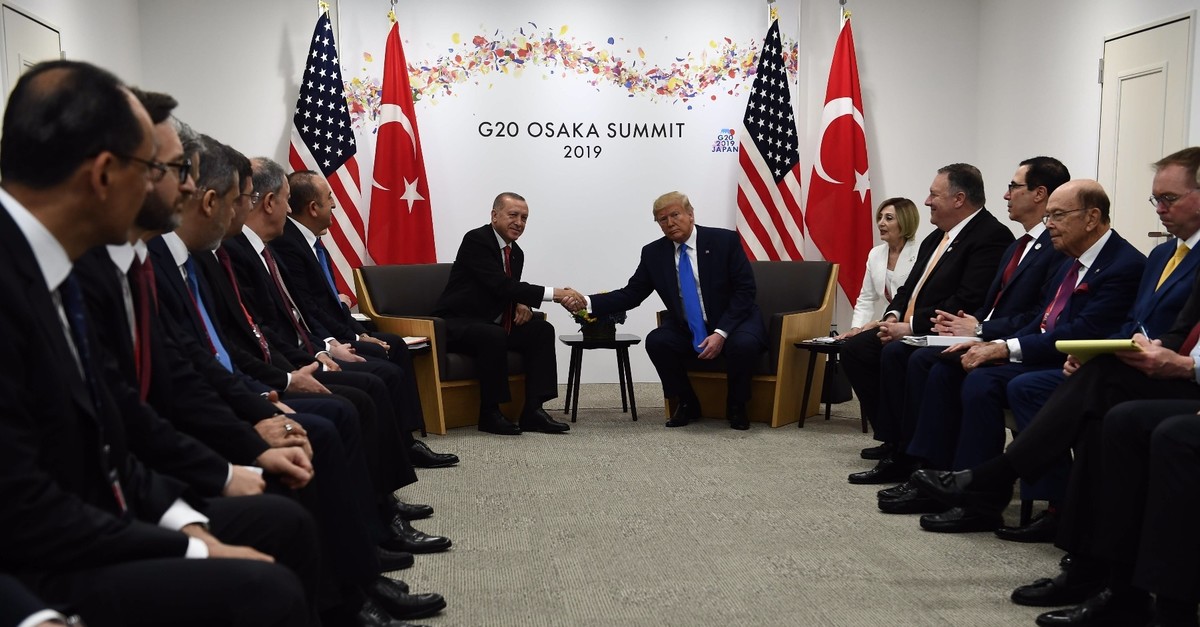 Prior to the G20 Summit in Osaka, Japan, the Turkish and American public had been wondering about the outcome of the meeting between President Recep Tayyip Erdoğan and U.S. President Donald Trump since the agenda of the two leaders was preoccupied by Turkey's purchase of the Russian S-400 surface-to-air missile (SAM) system, and its participation in the multinational F-35 stealth fighter manufacturing program.

After Trump's comments on Turkey's stance regarding the S-400 purchase, however, the meeting created a positive outlook for the maintenance of dialogue between the two countries, benefiting from a 67-year partnership as part of the North Atlantic Treaty Organization (NATO).

While the S-400 was the main item on the agenda, the two leaders and their delegations also had a chance to revisit their commitment to increasing bilateral trade and expanding economic cooperation. The determination of the Turkish and American presidents to raise bilateral trade volume has also been welcomed by Turkish business circles.

In the Erdoğan-Trump meeting Saturday during the G20 Osaka Summit, Trump said Turkey is a friend of the U.S. "We have done great things together, and we are big trading partners," noted U.S. President Trump, adding: "I think $75 billion is small. I think it is going to be well over $100 billion soon."

In February, Erdoğan and Trump agreed to increase bilateral trade volume to $75 billion, a decision hailed by Turkish and American business communities.

Stressing that Turkey and the U.S. are doing more and more business, Trump expressed the U.S. expectation to quadruple business with Turkey.

In 2018, Turkey-U.S. bilateral trade volume was $20.6 billion, according to data the Turkish Statistical Institute (TurkStat). While Turkey's exports to the country came to $8.3 billion, its imports totaled $12.3 billion.

TurkStat data also showed that in the period January to May this year, bilateral trade volume between the two NATO partners was $7.8 billion. U.S. purchases of Turkish products were $3.4 billion, while exports were $4.4 billion.

Commenting on the prospective outcomes of the meeting for Turkish-American commercial ties, Turkey's business circle welcomed the positive atmosphere of the meeting between Erdoğan and Trump.

Blaming the administration of former U.S. President Barack Obama for the ongoing S-400/F35 tension, Trump said it is not Turkey or President Erdoğan's fault. Trump also gave a clear sign that his administration will not seek any sanctions against Turkey.

Recalling that Trump raised the bilateral trade volume target between the two countries to $100 billion from $75 billion, Yalçındağ said, "We are also revising our target. We will do our best." He added they have been working on a road map for a while that will be presented to both presidents during Trump's visit to Turkey.

He stressed that new agreements and investments could easily facilitate the accomplishment of the bilateral trade goal, which has been revised up to $100 billion. Aydın specifically noted that a number of tax agreements would be ideal to start with as the Turkish business world has been indicating for a while.

From a historical perspective, early economic dialogue between Turkey and the U.S. began with the Economic and Technical Cooperation agreement signed in 1947 with a view of implementing the Truman Doctrine in the aftermath of World War II. While the strategic political and military cooperation expanded with Turkey's membership in NATO in 1952, the economic partnership grew more exponentially as Turkey welcomed more American companies.