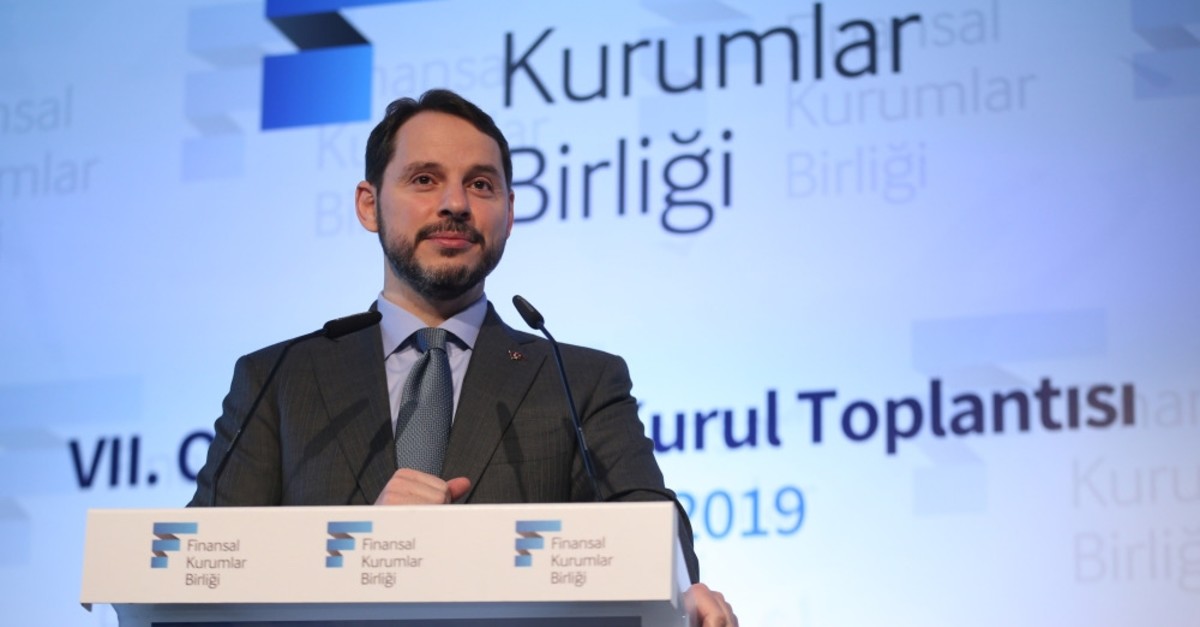 Treasury and Finance Minister Berat Albayrak addresses the 7th Ordinary General Assembly of the Association of Financial Leasing in Istanbul, July 5, 2019.
by Daily Sabah with AA Jul 06, 2019 12:23 am

A four-year period that offers Turkey opportunities is ahead, Treasury and Finance Minister Berat Albayrak said, also noting that concrete improvements were seen in market indicators and macroeconomic data recently

Turkey will benefit from the four-year period ahead to prepare a basis for attaining its dynamic structure, the finance and treasury minister said Friday.

"Turkey has gained significant experience in fighting against foreign currency attacks in the last period," Treasury and Finance Minister Berat Albayrak underlined during the 7th Ordinary General Assembly of the Association of Financial Leasing in Istanbul.

"Today, we have a four-year period ahead of us offering Turkey opportunities. We are preparing a basis for Turkey to attain its dynamic structure in a permanent and steady way," Albayrak said.

Minister Albayrak stated that positive developments were seen for the Turkish lira, the country's market indicators and macroeconomic data, such as risk premiums, inflation rates and interest rates, in the recent period.

"We have come to these days by gaining significant ground in the rebalancing period," he said, adding that priority was given to the solution of the current deficit and high inflation problems. He recalled that Turkey's current account deficit dropped to $8.6 billion in April, compared to the historic high of $57.9 billion in May 2018.

He also said Turkey will post a current surplus in June for the first time in nearly 17 years since the rule of the Justice and Development Party (AK Party). Last year, the annual current account balance posted a deficit of around $27.6 billion, improving from a nearly $47.5 billion deficit in 2017. The figure was the lowest since 2009, while Turkey's highest annual current account deficit over the last decade was seen in 2011, with $74.4 billion.

The current account deficit was around 3.5% of the country's gross domestic product (GDP). The country's new economic program, announced in September, is targeting a current-account-deficit-to-GDP ratio of 3.3% this year, 2.7% in 2020 and 2.6% in 2021.

INFLATION TO DROP TO SINGLE DIGIT

Albayrak also welcomed the latest inflation data, indicating it will drop to single digit in the upcoming period.

Consumer prices in Turkey have fallen to their lowest level in a year in June, particularly thanks to a base effect and decline in food prices. The annual inflation increased by 15.72% year-on-year last month, a sharp decline compared to 18.71% in May, according to the Turkish Statistical Institute (TurkStat) on Wednesday.

Consumer prices in June increased only 0.03% month-on-month, according to TurkStat, while economists expected an increase of 0.08%. The sharp drop in June inflation was driven by a high base effect and a drop in food prices. The highest monthly decrease was seen in the price of food and non-alcoholic beverages, which dropped by 1.65% last month, while that of clothing and footwear declined by 1.57%. Unprocessed food prices were down 5.61% while fresh fruit and vegetable costs declined by 11.26% in June from May.

The June figures represent the lowest rate of inflation since June of last year, when it stood at 15.39%.

As laid out in Turkey's new economic program announced last September, this year country's inflation rate target is 15.9%, followed by 9.8% next year and 6% in 2021.

According to an inflation report by the Central Bank of the Republic of Turkey (CBRT) released in April, year-end annual inflation is expected to hit 14.6% in 2019, hovering between 12.1% and 17.1%.

Given the decline in inflation and stronger Turkish lira in recent weeks, some analysts say it might lead to the first rate cut by the CBRT since last September. The Monetary Policy Committee (MPC) is set to hold its next meeting on July 25.

At its latest meeting last month, the CBRT left its policy rate

-one-week repo auction rate unchanged at 24% as expected and said it will keep its policy stance tight to "reinforce the disinflation process."

The bank will hold four more MPC meetings this year. In 2018, the CBRT held nine MPC meetings, as interest rates climbed from 8% to 24% over the course of the year.