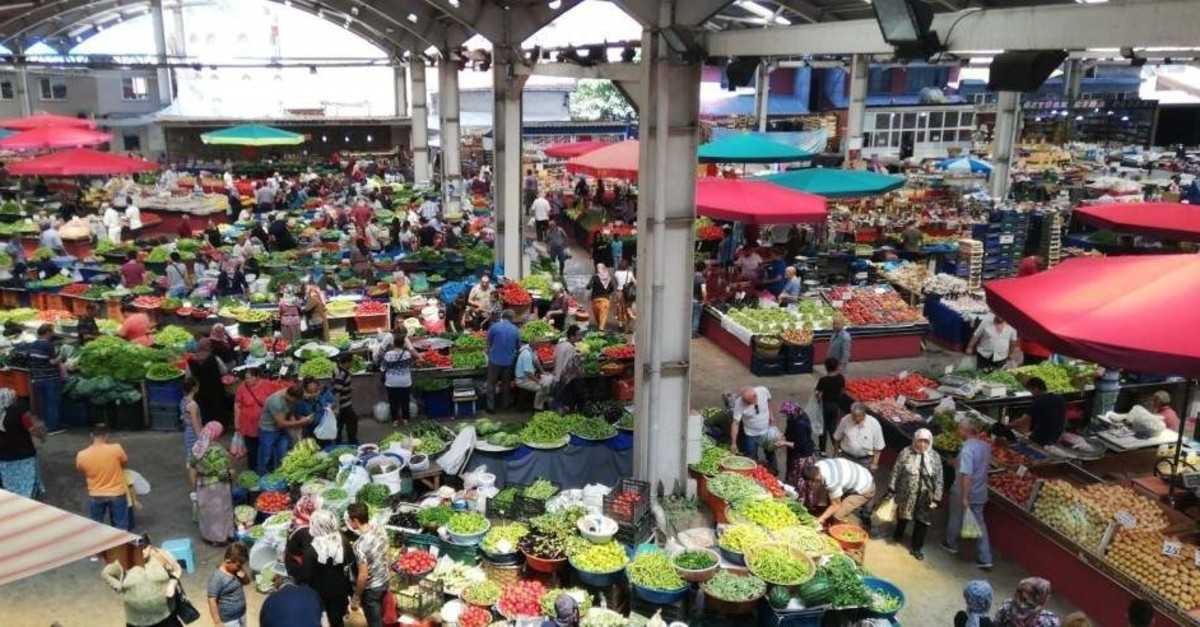 Declining inflation shows that steps taken by the government continue to bear fruit, according to Treasury and Finance Minister Albayrak, who says Turkey is on course to achieve its year-end target

Inflation last month dropped to its lowest level since December 2016, when the figure came to 8.53%, the data by the Turkish Statistical Institute (TurkStat) revealed.

The steep decline in inflation, which had become a pressing issue for the Turkish economy over the last year, came as a result of expanded efforts, a more stable lira, lowering demand and the fading effect of last year’s price spike.

“Turkey just posted the lowest inflation rate it has seen in the last three years,” Treasury and Finance Minister Berat Albayrak said when commenting on the data.

“The steps we have taken to fight inflation continue to bear fruit,” Albayrak said over his social media account.

Annual inflation was down 0.71 percentage points from 9.26% in September, when it hit single digits for the first time since July 2017. Inflation has been gradually falling since topping 25% in September last year.

“We will maintain the same decisive stance in the fight against inflation and achieve the year-end target,” Albayrak added, referring to the goal laid out in the new economic program he announced at the end of September and which expects the inflation rate to hit 12% this year. The program forecasts inflation to stand at 8.5% next year and 6.0% in 2021.

TurkStat has stated that the highest annual price rise last month was seen in alcoholic beverages and tobacco, at 43.60%. The institution stated that, similarly, high annual increases were seen in health care, at 14.24%, education, at 14.20%, hotels, cafes and restaurants, at 13.71%, and miscellaneous goods and services, at 13.43%.

Comparative to other surveys, one Reuters poll forecasted inflation of 8.6%, while a group of 14 economists in the Anadolu Agency (AA) survey expected an average annual climb of 8.41%.

Economists also forecast that year-end inflation would come to 12.11% on average – the lowest estimate being at 11.5% and the highest being12.8%.

According to official data, consumer prices were up 2% month-on-month in October.

The official data also said this October the 12-month average hike in consumer prices was 16.81%.

The inflation was in parallel with the market expectations, according to AA finance analyst and economist Haluk Bürümcekçi, who pointed to a continued decline in processed food prices and price increases in other non-food groups remaining moderate compared to a period of last year, when high volatility in exchange rates was experienced, as having an effect on the decline in last month’s inflation.

Bürümcekçi told Anadolu Agency (AA) that the annual rate of increase for food prices fell to 7.8% and declined below the new food price assumption (10%) in the Inflation Report.

He also stated that the course of food prices, which had an average annual increase of around 10%, would be one of the most important determinants in the matter of deviation from the end-year inflation forecast revised by the Central Bank of the Republic of Turkey (CBRT) as 12%, that the base effect in headline inflation would be disadvantageous in the last two months of the year and that CPI could close the year at around 12%.

In terms of the course in the upcoming period, Bürümcekçi emphasized that the outlook of crude oil and other commodity prices, exchange rate movements and public price/tax adjustments will determine the direction of risks on inflation, in addition to the uncertainty and volatility of food prices.

He further suggested that the central bank could close the year with another rate cut and then go on hold.

In its July meeting, the bank cut the one-week repo auction rate by 425 basis points, before slashing the rate further by 325 basis points in September and 250 basis points late last month to 14%, taking advantage of slower inflation and a steadier lira.

The reason behind the significant rate cut by the central bank, according to Bürümcekçi, are the current forecasts that the year-end inflation will remain significantly below the forecasts given in the bank’s July Inflation Report.

In its last quarterly inflation report of the year, unveiled last week, the central bank lowered its inflation forecast for the end of this year to 12%, down from 13.9% in the July report, attributing it to changing food inflation expectations and improvement in the underlying trend.

In his speech at the presentation report, Murat Uysal, the governor of the CBRT, said significant improvements in the underlying trend of inflation and downward revisions to import prices and food prices had a positive impact on the year-end inflation forecast compared to the previous reporting period.

He added that the projections for next year and 2021 were left unchanged at 8.2% and 5.4%, respectively. The governor stressed the focus of eventually bringing down inflation to below 5% over the medium term.

At the point reached, Uysal acknowledged that the bank has used a significant part available for a loose monetary policy, but did not rule out further easing in the near term.

He said the bank's future policy steps would depend on further developments in inflation.

According to the governor, the disinflation process continues, with base effects, tight monetary policy and domestic demand also contributing to a fall in inflation, while the monetary policy implementation will ensure the forecast is achieved.

“We interpret these messages from Governor Uysal in a way that means the bank will make a final cut in December to the extent offered by the conditions of the time, and then proceed to wait," Bürümcekçi said.