Turkey to close 2019 with positive growth, more economic adjustments in 2020 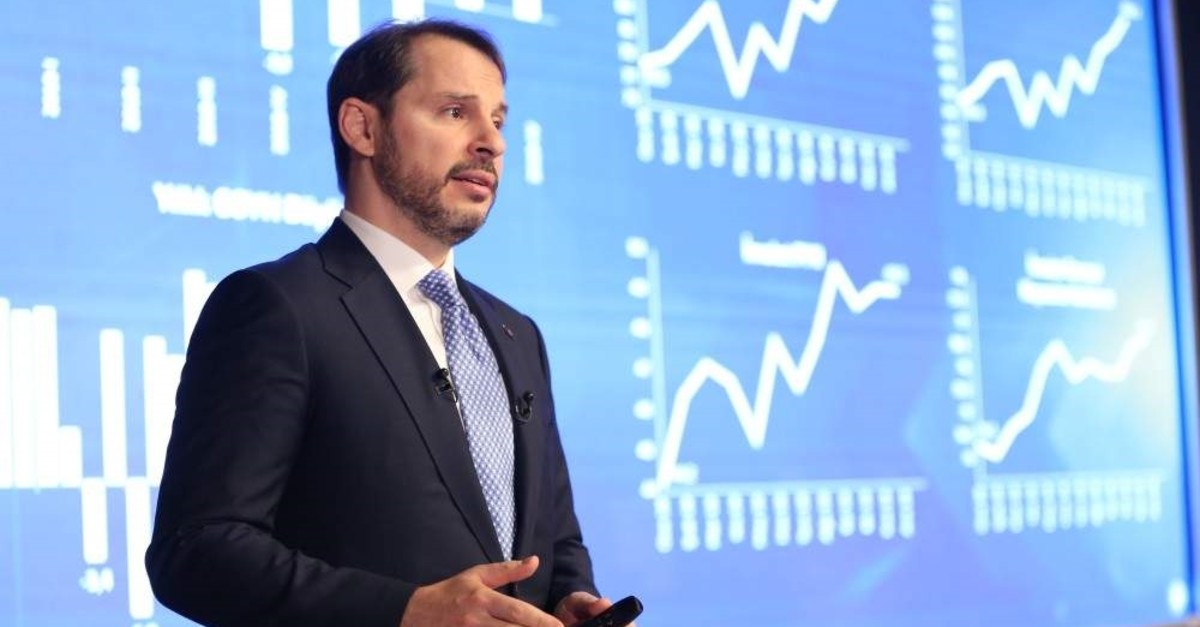 Having left two difficult years behind, Turkey has developed financial infrastructure to help minimize the effects of external risks and looks to continue on a balanced growth path, Treasury and Finance Minister Berat Albayrak said

Turkey achieved a soft landing in 2019 and will have closed the year with positive growth, Treasury and Finance Minister Berat Albayrak said, stressing that the country will see more economic adjustments in 2020.

Speaking at a meeting with economy journalists in Istanbul Monday, Albayrak said the Turkish economy displayed a strong reflex amid multiple geopolitical risks and developments experienced throughout last year.

The Turkish economy began rebalancing last year after losing momentum in the second half of 2018 due to turmoil and high volatility in exchange rates that pushed up inflation and interest rates while domestic demand tumbled.

Albayrak said Turkey was subject to roughly three currency attacks between June 2018 and June 2019. He emphasized that the country developed financial architecture designed to minimize the effects of external political risks.

"We have seen that in the light of these developments, serious improvements started to take place in Turkey," he said, particularly pointing to improvements in the country's two-year government bonds.

"At this point, we have started to see a significant improvement in the five-year credit default swaps (CDS) and two-year government bonds, which are very important for us. They have dropped below not only the last one to two years but also in some indicators, even below the last three to five years," the minister added.

A presentation that was displayed during the minister's speech read that there was an improvement of nearly 337 basis points in Turkey's five-year CDS from August 2018 to date and pointed to a 1,800-point drop in the two-year government bonds.

The country returned to growth in the third quarter of 2019 thanks to steps toward balancing implemented by the economic administration and strong synergy between the government and the private sector.

The economy grew 0.9% year-on-year between July and September of this year, according to Turkish Statistical Institute (TurkStat) data. Compared with the second quarter, GDP expanded by a seasonally and calendar-adjusted 0.4%, its third positive quarter-on-quarter in a row, TurkStat data showed.

In the first two quarters, the economy contracted 2.3% and 1.6%, respectively, on an annual basis. In 2018, the economy posted an annual growth rate of 2.8%, narrowing in the last quarter. The average estimates for the fourth quarter of the year are 4.5% to 5%.

The overall annual growth forecasts vary by 0.3% to 0.6%. The government forecasts growth of 0.5% for this year. Also, the NEP targets a 5% annual growth rate for each of the next three years.

The country's new road map prioritizes a change in the economy, Albayrak added, saying this change would be implemented jointly by the public and private sectors.

"We are cooperating with all stakeholders to implement this change step-by-step," he added, pointing to an export-oriented strategy that would also support the growth of the manufacturing industry, all of which led to balanced, disciplined and real growth.

Single digits in inflation in 2020

The minister further elaborated on inflation, stressing that the country saw a successful performance in terms of inflation in 2019, and year-end inflation came in below the New Economic Program (NEP) forecast.

Albayrak emphasized that inflation would come down to single digits in 2020 and that he does not expect the increase in loan volumes to pressure inflation. He also vowed to take measures aimed at eliminating risks in food prices.

Inflation has been a pressing issue for the economy since the second half of 2018 when it surged to almost 25.24% in October as steep depreciation in the Turkish lira pushed up the price of imported goods.

The government pledged commitment to mitigating inflationary pressures this year as it looks to stabilize the inflation rate at single digits by improving competition in the goods and services markets and enhancing production.

Albayrak emphasized that the government with all other stakeholders put forth a significant mobilization within the scope of the "All-Out Fight against Inflation" program announced in October 2018. He stressed that inflation will continue to be an important anchor for the government in 2020 in the coming years.

Among others, Turkey's central government budget balance posted a deficit of TL 123.7 billion in 2019, according to the Treasury and Finance Ministry.

"Despite the last two difficult years, the government's budget deficit-to-gross domestic product ratio remained below 3%; budget discipline will continue to be one of the most important factors for Turkey," Albayrak noted.

Turkey's budget revenues rose 15.5% to hit TL 875.8 billion year-on-year in the January-December period. The country's budget expenditures reached TL 999.49 billion in the year, up 20.3% from the previous year.

Excluding interest payments, the budget balance posted a deficit of TL 23.75 billion in the period, while interest expenditures totaled some TL 99.94 billion. Government tax revenues reached TL 673.3 billion from January to December, showing a rise of 8.3% on a yearly basis.

In 2018, Turkey's central government budget balance had shown a deficit of TL 72.6 billion, meeting a year-end target of a 1.9% budget-deficit-to-gross-domestic-product ratio.