Terror: Instability in the country, disorder in the region 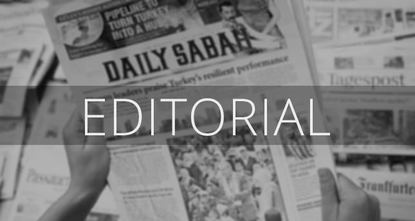 by The Editorial Board Sep 10, 2015 12:00 am
Turkey has been facing increasingly ferocious PKK attacks for the past two months. The terrorist group's decision to end the cease-fire coupled with the indiscriminate killing of civilians and members of security forces has forced the suspension of the reconciliation process, which was initiated in 2011 with much optimism and hope.

The security operations launched by Turkey are in response to these terrorist attacks and as announced last month, the state is determined to wage a more active counterterrorism campaign from now on.

Turkey is currently combatting a group recognized by the EU, U.S. and many others as a terrorist organization. Turkey is not waging a war on its citizens of Kurdish origin, unlike what some Western media outlets seem to be implying. The state has no problem with Kurds.

Kurds need to stand up for peace and oppose the PKK, which demonstrably has no intention to honor any kind of peace deal.

The Turkish state is obligated to implement all necessary measures to protect its citizens, no matter where they live, from this group and maintain peace. No democracy can tolerate such a threat to its security. While ensuring peace, the government needs to uphold the crucial balance between security and rights.

The Western image of the PKK

The current chaotic state of affairs in the Middle East has allowed regional terrorist groups access to weapons they never could have possessed otherwise. There is no doubt that the PKK exploited the disorder in Iraq and the civil war in Syria to boost its capacity for mayhem. Weapons used by the PKK prove that the Syrian crisis is exporting insecurity to the entire region. Weapons given to the PKK and the Democratic Union Party (PYD)'s People's Protection Units (YPG) as part of the fight against the Islamic State of Iraq and al-Sham (ISIS) are now used to murder Turkish soldiers and innocent civilians.

The responsibility for these deaths lies at the feet of all countries including NATO allies that carelessly airdropped weapons in the region over Ankara's vehement objections. Turkey's repeated warnings failed to persuade its allies, the reckless policies of whom are now hurting us. Direct or indirect aid to the PKK is nothing but aiding and abetting terrorism.

The PKK's decision to turn its back on peace and engage in a violent campaign failed to move the Western media. The security measures against this group were criticized by media outlets in the West, which tried to portray the group as secular in order to paint an attractive media-friendly image against ISIS. They ignored the fact that the PKK is recognized as a terrorist group by their own governments. This stance legitimized the group and its terrorist actions.

International media organizations need to beware of being used as pawns by the PKK's urban cells. These cells try to manipulate security forces' efforts to liberate certain neighborhoods from these thugs with messages on social media claiming that civilians are being killed. Western media outlets should not abandon Turkey in its fight against terrorism. They should be careful not to legitimize the PKK or its attacks in reports and broadcasts.

At a time when Turkey is going through such a traumatic period there needs to be people and groups brave enough to shout the truth and show the way to peace. National media organizations are especially key in efforts to inform the public in an honest and straightforward way. Responsible reporting and commentaries without any censorship and pressure are crucial to build trust to overcome the manipulative tactics of many people and groups. Daily Sabah, which has built trust among many due to its honest and fact-based reporting, is one such media outlet, and that is why Tuesday's attack on the Turkuvaz Media Group building was so unacceptable. Stones thrown and insults voiced against it will not stop Daily Sabah from reporting what it believes to be right, and its editorial policy based on peace, democracy and the well-being of the whole nation will not change now or in the future.
Last Update: Sep 10, 2015 2:29 am
RELATED TOPICS