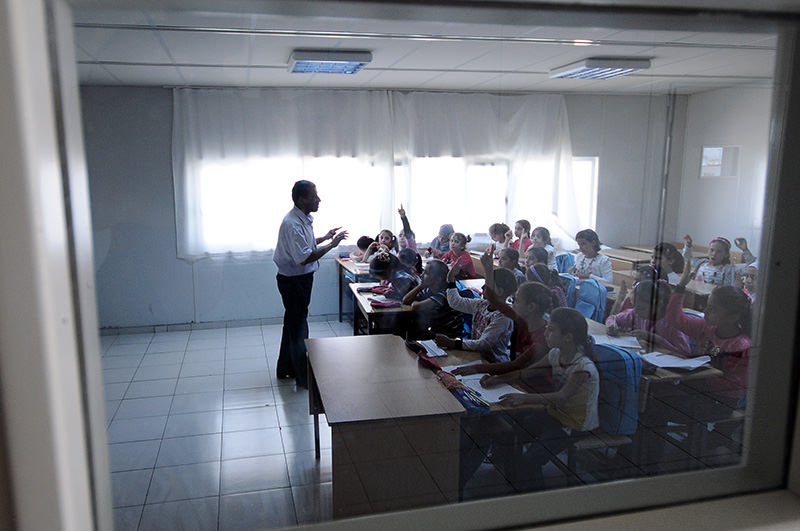 |AA Photo
by Anadolu Agency
Oct 02, 2015 12:00 am
As the school bell rings, Syrian children hurry up to enter their classrooms.

They have different dreams and separate plans, but their short-term aim is the same-to continue their education which has been halted by the war and make a new start in a secure country.

Some 600 Syrian children aged between 6-13 years have returned to education at the start of the new academic year at al-Menahil ['science fountains'] school in Istanbul's Sultangazi district.

Al-Menahil uses the building of one of nine state schools which have opened their doors to Syrian children in the city this year. A two-shift system operates in the building. Turkish students go to classes until 3.00 p.m. and then the Syrians take over.

The students, the majority of whom saw war in their country with their own eyes, told Anadolu Agency about their happiness at finding a chance to study in Turkey.

"I would like to be a doctor when I grow up and treat Syrian patients," says 12-year-old Rosel May.

Because of the conflict, Rosel's education has been halted for three years but she is happy to return to school, seemingly already used to her friends and teachers even if it was her first week.

"There is no war, no bombing here. I am very happy to be here. Everything is quite good," Rosel adds, with her eyes shining.

Eight-year-old Berat Sait's dream is to be a pilot and transport people to reach whichever place they want.

Berat, a clever and quiet boy, is also aware of the need to study hard to achieve his dream, but he also enjoys playing with his friends at school.

"My days are going very good here. I am learning new things from my teachers and playing football as well," he says.

Not only students but teachers-all Syrian-are happy to be able to work again. They also admit that their job is not easy.

"Children are very sensitive as they have seen a war... what they experienced is also different but to be able to help them and contribute to their education makes me very happy," says 28-year-old Merve Beyruti, one of 60 teachers at the school.

"As some of them lost their families, you need to be both their father and mother," Beyruti adds; "You need to speak to them carefully."

Ali Sahin Hamed, who was a petroleum engineer in Aleppo, is sending his four children to the al-Menahil school.

"We - families, teachers and students-cried here when this school opened for Syrians for the first time last year," Hamed says tearfully: "It was like a dream for us."

Akademi Istanbul Syrian School opened in 2013; from primary school to high school, it is giving education to around 800 students, supporting them to go to university.

"We are sending successful students to the university on a scholarship," Yusuf Katipoglu, board chairman of the school, says. "Eight of our students are studying at Istanbul Sehir University this year."

However, he expresses concern for the many children who have not been able to attend school.

More than two million Syrian children worldwide will not able to return to school this year, according to recent figures from the United Nations Children's Fund, UNICEF.

"Not to be able to go to school is a quite traumatic thing. This will lead to serious problems in Turkey in the future. The Turkish government should focus on this issue much more, and more Syrian pupils should go to school," Erdoğan says, adding: "Within this framework, teaching them Turkish is quite important and should be an urgent move."

There were only two state schools supporting Syrians' education last year. Seven more have been included this year. Forty-eight temporary education centers also exist in Istanbul, where the Syrian curriculum is applied.

Around 21,000 Syrian students are studying in Istanbul alone this year, according to figures from the provincial directorate for national education.

Turkey has welcomed Syrians since the beginning of the civil war in March 2011, hosting around two million people under temporary protection regulations, which provide for an unlimited stay, access to public medical health care and protection against forcible return.
Last Update: Oct 02, 2015 7:02 pm