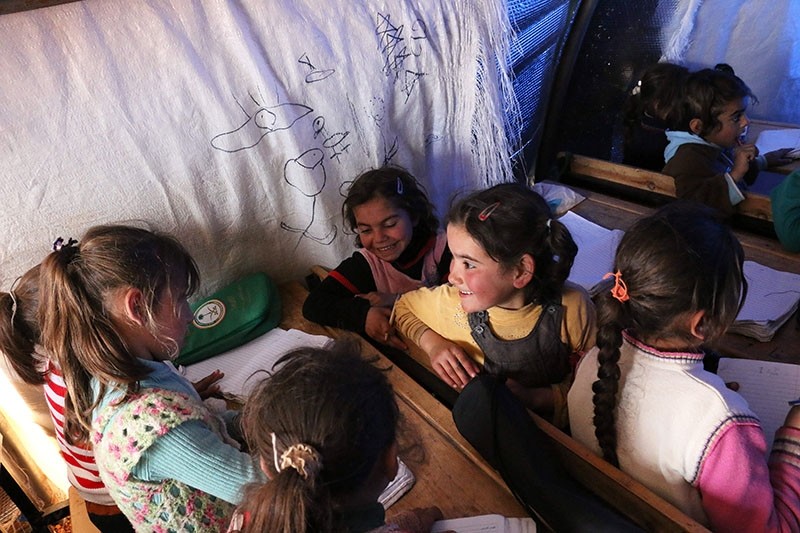 Combatting Syria's so-called ‘lost generation', children forced to skip school are getting a second chance at life. In a bid to help the ‘future of Syria,' Turkey is reaching out to Syria's deprived children by restoring schools and boosting the education of refugee children in the country

Torn apart by the ongoing conflict, Syrian youth and children succumb to the risk of disruption in their education. Striving to address the plight of hundreds of thousands of Syrians forced to drop out of school, Turkey took its struggle to reach out to children not attending school beyond the borders.

The country, which hosts nearly 3 million refugees from its southern neighbor Syria, provides both schooling for refugee children as well as to those displaced inside Syria.

To curb the disturbing "lost generation" phenomenon, the Turkish Ministry of National Education offers its services to safer Syrian towns like Jarablus, al-Bab and Azaz as well as in Iraq's Tal Afar, which has also been subject to Daesh threats.

Those Syrian towns have seen a return of the displaced local population after the Turkey-backed Free Syrian Army (FSA) fighters liberated them from the terrorist group's control in the recently concluded Operation Euphrates Shield.

Speaking to local reporters, Ali Rıza Altunel, who heads a lifelong learning department of the ministry, said his ministry was working to resume education from Jarablus to al-Bab while they are also working to reach out to some 833,000 school-age Syrian children in Turkey.

The country has managed to enroll 503,000 Syrian refugees at schools since the war broke out in Syria six years ago and Altunel says would-be high school students are at particular risk of not having a proper education.

"We provide them with temporary education centers, including those inside refugee camps, and education services at Turkish schools and we also have university students [from refugee families]," he says.

The youth and children are key to the future of the conflict-ridden country as a quick solution to the ongoing civil war still remains out of reach with the Bashar Assad regime clinging to power.

"In the future, the people of Syria will need the experience and wisdom of the well-educated youth. Together, they will build a peaceful Syria. We are doing what a neighbor should do for them," Altunel says.

Altunel says his ministry is mobilized to improve education services in Syria as well by rebuilding and refurbishing schools.

"We focus on the Operation Euphrates Shield area, to schools in Jarablus, al-Bab, Azez and other towns. We supply them with everything from desks, textbooks, notebooks to the salaries of teachers. It has been about two months since the proper education services started," he added.

Operations Euphrates Shield started last year and officially ended this month after Turkey-backed FSA rebels drove out Daesh from towns near the Turkish border. Apart from military support, Turkey extended its hand in humanitarian aid to locals returning to their hometowns after being driven out by the terrorist group.

Schools have been prioritized in the rebuilding process in towns liberated from Daesh and the Maarif Foundation of Turkey has already opened two schools in Jarablus. The schools, one of which was converted into a prison by Daesh when the terrorist group took over the town, have been renovated and refurbished.

More schools are planned for other towns captured from the terrorist group. Birol Akgün, head of the state-linked Maarif Foundation, said they build schools to fight against the terrorist groups' recruitment among the disillusioned youth and children.

"We build schools so that [Syrian] children will not fall in the 'terrorist trap,'" Akgün told the Sabah newspaper.

Education also is viewed as a key element to stop radicalization of the youth as Daesh seeks to expand its ideological clout. The Maarif Foundation plans to open four more schools in Syria.