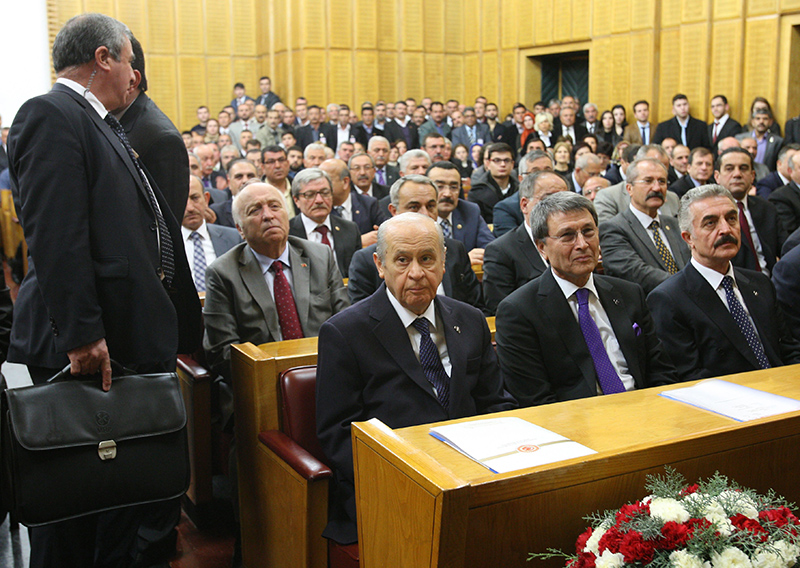 by Ali Ünal Mar 11, 2015 12:00 am
Turkey will hold its 18th general elections to elect 550 new members of Parliament on June 7 and various electoral alliance alternatives continue being discussed by political circles. While the Peoples' Democratic Party (HDP) is looking for an alliance with leftist parties to pass the 10 percent electoral threshold, the right-wing Grand Unity Party (BBP) and the Felicity Party (SP) are also continuing negotiations with the Nationalist Movement Party (MHP).

In the 2011 general elections, the MHP received 13 percent of the vote and recent polls suggest that the MHP may get a similar result in the upcoming election. An electoral alliance seems to be the only way the SP and BBP can have a place in Parliament considering they respectively received 1.27 percent and 0.75 percent of the vote in the 2011 elections. In fact, the MHP made electoral alliances with both the SP and BBP in past elections and a recent statement from party leaders also suggests the possibility of a new electoral alliance. Last week, MHP Chairman Devlet Bahçeli said that his party's doors are open to election alliances, however, they have not held any negotiations about alliances with the aforementioned parties, but added that there is plenty of time before the elections to discuss these issues. On the other side of the table, the BBP and SP seem to be eager for an alliance. BBP leader Mustafa Destici has already said that his party would welcome an alliance with the MHP. "We and the MHP are sister parties, originating from the same root. It is therefore not unnatural for the public to consider an alliance between our parties appropriate," Destici said. The other right-wing party, the SP, also shared a similar sentiment. Responding to the question about a possible electoral alliance with the MHP, the chairman of the SP, Mustafa Kamalak, said that they are open to cooperation. "We are ready to serve this country in every respect," he said.

Despite both the BBP and the SP's eagerness, the MHP has doubts about the contributions they would make in an electoral alliance to the party. According to sources from the MHP headquarters, the party's doubt is based on two fundamental problems. Firstly, MHP circles believe that the positive contribution from this alliance would be very limited in the election, in terms of votes. "In the 2011 general elections, the total votes for the two parties were less than two percent. Our assumptions suggest that both of these parties have weakened since the last election. I don't think the contribution of from parties to the MHP, in terms of votes, will be significant," said a senior political advisor from the MHP headquarters, who spoke under the condition of anonymity.

Secondly, the BBP and the SP's intimacy and cooperation with the Gülen Movement, which is led by U.S.-based imam Fethullah Gülen, has also aroused questions about an alliance. Prior to the 2011 general election, sex tapes of MHP deputies were leaked and, due to this incident, 10 top executives from the MHP resigned from their posts and from the party before withdrawing their candidacy for the post of deputy in the upcoming general elections. Regarding the incident, Bahçeli accused the Gülen Movement, saying those "beyond the [Atlantic] ocean" have a role in the emergence of the video scandals. More recently, MHP Deputy Chairman Tuğrul Türkeş said that Gülen Movement attempts to infiltrate the party were stopped by the party administration. "They tried but we ended it. I don't know whether it is done by core authorities or local authorities but we saw some Gülen Movement people rallying to settle in our party's provincial organizations and we intervened." Türkeş said. "Both the SP and the FP have been flirting with the Gülen Movement in the last two years. I don't think that the MHP administration will allow an electoral alliance with them, nor will they facilitate the entry of a Gülen Movement Trojan [horse] into Parliament," a senior political advisor from the MHP added.

According to the Supreme Election Board, political parties have to submit their list of candidates before April 7 and the final list will be announced on April 24.