CHP seeks to receive votes from conservatives with headscarf-wearing candidates 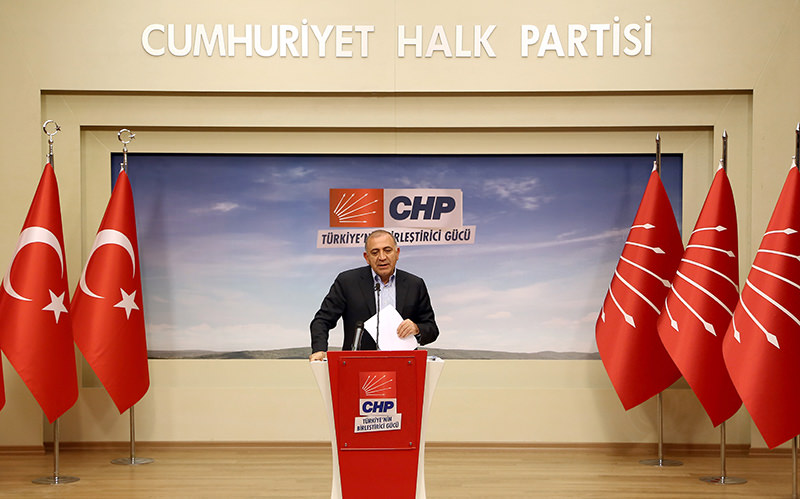 Criticized by party dissidents for straying from the party’s ideology, the main opposition CHP seeks to receive votes from conservatives with headscarf-wearing candidates in the June 7 elections

Ahead of the June 7 general elections, the main opposition Republican People's Party (CHP) stepped up its efforts to attract votes from conservative circles with a series of openings as the party's Secretary-General Gürsel Tekin yesterday visited the conservative daily Milli Gazete and announced that the party may announce female deputy candidates who wear headscarves for the general election.

Meanwhile, all members of the CHP administration in the Black Sea province of Rize have resigned from their posts after Mehmet Bekaroğlu, a former conservative and now CHP senior, got involved in a row with CHP branch head Mehmet Aslankaya.

Milli Gazete is a conservative Turkish daily founded in 1973 and aligned with the conservative National Salvation Party (MSP) that was founded in 1972 and closed down after the 1980 military coup. The head of the party was Necmettin Erbakan, whose ideology was Milli Görüş (National Vision), which calls for the strengthening of Islamic values in Turkey.

Posing for cameras with one of Erbakan's books, Tekin criticized the February 28 post-modern coup in Turkey and said: "Each political party can be criticized, they all have deficiencies. But it is a huge mistake for parties to describe people by their lifestyles and appearances. Mistakes have been made in past times. We [the CHP] are sincere on this issue."

The CHP has long been in efforts to take some steps in an attempt to receive votes from conservatives in the country as many intra-party dissidents criticized the party with claims of straying from its ideology, opening up to right-wing voters and an alleged alliance with the Gülen Movement, which is a religious movement that is accused of infiltrating key state institutions to allegedly overthrow the government.

Internal conflict in the CHP first erupted during the March 30 local elections. The failure of the main opposition in the elections caused party dissidents to raise their voices against the party administration while some accused the CHP of cooperating with the Gülen Movement behind closed doors. The August 10 presidential election also witnessed the same "atmosphere of failure" for the party when CHP Chairman Kemal Kılıçdaroğlu announced former Organization of Islamic Cooperation (OIC) head Ekmeleddin İhsanoğlu as their joint presidential candidate with the Nationalist Movement Party (MHP) and caused it to hold its 18th extraordinary party congress in September. Even though Kılıçdaroğlu was re-elected, party dissidents continued to criticize the party after Kılıçdaroğlu accepted Mehmet Bekaroğlu, who was a member of the far-right Felicity Party (SP) into the CHP and included him in the Party Assembly.

This is not the first time that the CHP is in a struggle to receive more votes from conservatives by opening to the right-wing. In 2008, the party's then Chairman Deniz Baykal had tried to change the party's strictly secularist rhetoric to appeal to conservative voters by accepting chador-wearing women as CHP members. What was referred to as the "chador initiative" received backlash from party members for threatening the secular nature of the party and an anti-chador campaign was started accordingly. Some CHP supporters openly tore chadors into pieces and tread on them, while an elderly woman wearing a chador who attempted to get on a campaign bus was attacked by a number of CHP members.