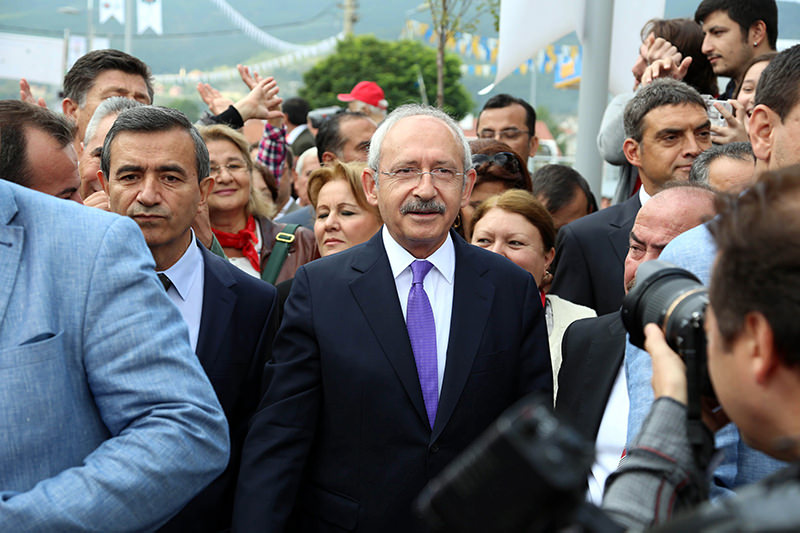 With the CHP going populist while the HDP tries to hide its pro-Kurdish roots to attract enough support to pass the 10-percent election threshold, the AK Party, which is focused on changing the constitution, seems destined for another victory

As the campaign season for the June 7 parliamentary elections begins, the ruling Justice and Development Party (AK Party), which has governed Turkey since 2002, remains favored to dominate the new Parliament. The main campaign pledge of the AK Party, which is projected to win 47 to 48 percent of the vote according to the latest ANAR poll released on Friday, is to replace the 1980 coup-era Constitution with a more democratic one and to institute a presidential system. The perennial runner-up, the Republican People's Party (CHP), which an ANAR poll shows will receive 23 to 25 percent support, is expected to drop its negative anti-AK Party propaganda and replace it with more populist promises during the campaign, such as pledging extra payments for pensioners. Far-right Nationalist Movement Party (MHP), which seems to be content to remain the third largest group in Parliament, is expected to base its campaign on criticism of the reconciliation process. The only other party with a slim chance to enter the new Parliament is the pro-Kurdish Peoples' Democratic Party (HDP), whose paramount objective is to pass the 10 percent election threshold. Currently standing at 8 percent support, the HDP is expected to push its pro-Kurdish goals into the background and voice more inclusive slogans in order to attract votes from the left and urban liberals. Having been snubbed by mainstream parties, the Gülen Movement has resorted to promoting independent candidates and supporting fringe parties that have no hope of getting close to the 10 percent election threshold.

A rally in the Turkish capital Ankara on April 19 will follow the party's Istanbul rally and the release of the party's election manifesto. Deputy candidate publicity will all be held in Ankara as the party is expected to hold more than 50 rallies around the country.

According to sources, the CHP is likely to implement similar election strategies based on populist promises. Sources at CHP headquarters have said that Kılıçdaroğlu will announce his election promises in the coming days, such as a significant increase in the minimum wage, reducing diesel prices to TL 1.5 ($0.60) as well as a poverty wage program for poor families, a family insurance project that aims to pay a certain amount of monthly pay to families who don't have enough income.

Abolishing the Council of Higher Education (YÖK) is among the CHP's electoral promises. The party also pledges to establish a "Craftsman Ministry" to support and solve the problems of craftsmen in the country. The election manifesto is also expected to touch on the problems of southeastern Turkey where the CHP has had little to no support in the election results for years.

For its election campaign and advertising process, the main opposition partnered with Benenson Strategy Group (BSG), the U.S. firm President Barack Obama also recruited for his 2008 presidential bid, and Ali Taran, who is known as a prodigy of advertising in Turkey. Taran gained fame when he ran the Young Party's electoral campaign in the 2002 general elections in which the Young Party won 7.2 percent of the vote. Taran attracted crowds to Young Party rallies with free food and a free concert and built the election campaign on populist promises such as doubling the minimum wage and reducing diesel prices to TL 1.

The party's election slogan is: "We applaud as a nation," and was announced by CHP Secretary-General Gürsel Tekin at a press meeting. A campaign ad with the same slogan has also started to circulate on media outlets.

Even though the CHP aims to receive more than 35 percent of the vote with its election campaign and has incorporated new public relations methods to be used during the campaign process, the latest poll by the Ankara-based pollster GENAR indicate that the main opposition's votes have decreased. According to the survey, the CHP would receive only 25 percent of the vote in the June 7 general elections.