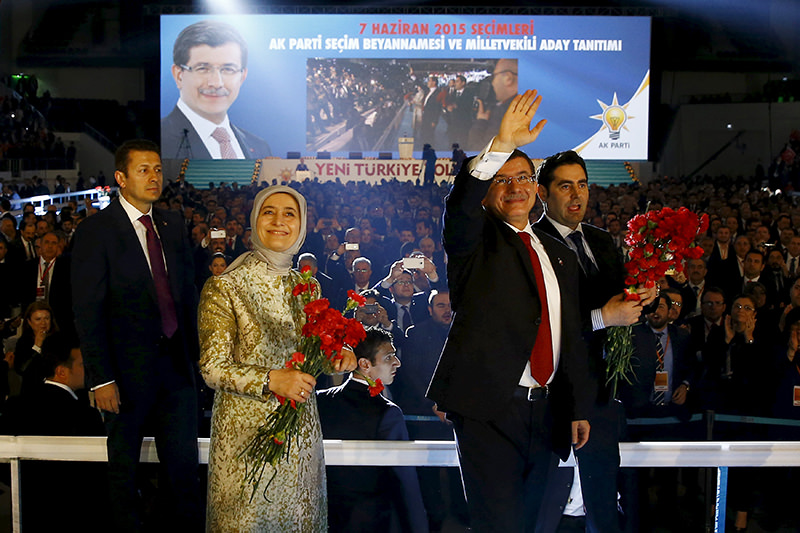 by Merve Aydoğan Apr 15, 2015 12:00 am
Prime Minister Ahmet Davutoğlu introduced the Justice and Development Party (AK Party) deputy candidates for the upcoming general elections on June 7 at an event in Ankara on Wednesday. Along with the AK Party's electoral manifesto, Davutoğlu also announced the long-awaited electoral social contract for new Turkey, which comprises 100 items. While the latest election poll, conducted by the prominent polling company GENAR, shows that support for the AK Party currently sits at 47 percent, Davutoğlu said in his speech that he aims to reach 55 percent support by June 7. The event was attended by thousands of political figures, prominent business people and celebrities. The AK Party election manifesto touches on four major points – the establishment of a new constitution, a presidential system, Turkey's reforms for democratization and combating infiltration and the "parallel structure."

The social contract introduced by Davutoğlu represents the government's 2023 goals for the centennial of the Republic of Turkey. During his speech, Davutoğlu emphasized the equality of the people of Turkey and added: "Our aim is to provide a diverse, liberal, democratic and civilian-based constitution. [The AK Party's] election manifesto is solely based on human dignity." He continued to introduce the social contract by underlining the items included in the election manifesto and the party's: "A new constitution that values freedom, justice and equality will establish the bases of our order." The current constitution was drafted in 1982 after the 1980 military coup. Despite numerous revisions over the last 30 years, according to constitutional experts, it still bears the stamp of military tutelage.

Item 46 of the AK Party election manifesto states: "Based on a constitution of the separation of powers, there will be no power that will not be unchecked under the national will perspective." The proposed presidential system will also be included in a new constitution. Davutoğlu commented on the hotly-debated presidential system during the event on Wednesday and said: "We envisage a presidential system within the liberal constitutional framework we mentioned previously, it represents the social differences in politics, where it also provides an independent effective legislature and executives." He said a presidential system would also provide democratic checks and balances for the goals of a new Turkey. He further added: "We see the restructuring of the administrative system into a presidential system as necessary to clear up the mess over lines of responsibility and to genuinely restore accountability." In addition, with a new constitution and system of governance, the AK Party aims to successfully finalize the reconciliation process by providing constitutional rights to the Kurdish community. With the newly introduced election manifesto and social contract, the AK Party government aims to continue its reforms in Turkey's democratization process and Davutoğlu announced that Turkey will continue to devote every effort in its EU accession process.

The AK Party's election manifesto also strongly emphasizes continuing its multidimensional foreign policy. Furthermore, it underlines that cooperation with the Balkans, Central Asia, Middle East, Africa and Latin America will be increased and enhanced. The election manifesto affirms to continue Turkey's conscientious foreign policy diplomacy and that the AK Party will apply all strategic efforts to make Turkey a global power. Furthermore, the AK Party government will continue its devoted efforts to combat the "parallel state" and other relevant organizations. Davutoğlu also criticized the opposition for not having a vision, and predicted that the AK Party will receive over 50 percent of the vote in the upcoming elections.