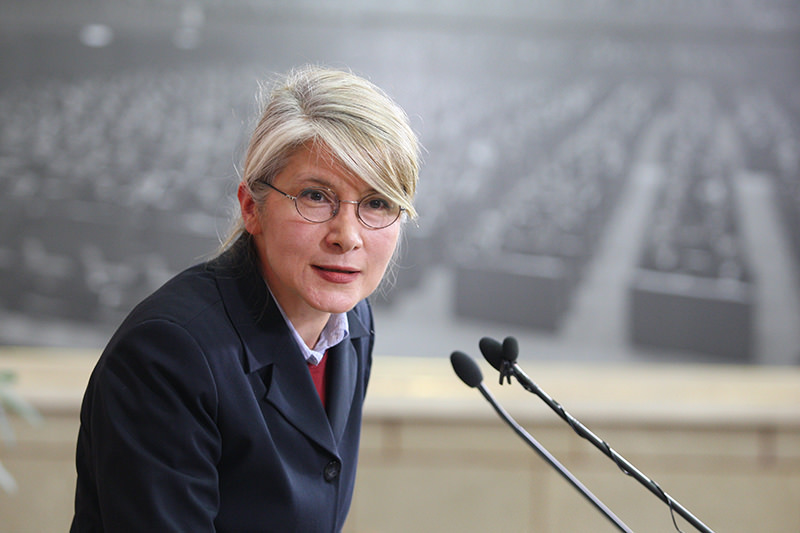 by Fatih Şemsettin Işık Jun 04, 2015 12:00 am
Anatolia Party (AP) Chairwoman Emine Ülker Tarhan, who was a former member of the main opposition Republican People's Party (CHP), has slammed the CHP and its leader Kemal Kılıçdaroğlu, saying he lacks the ability to create a viable opposition without indirectly teaming up with the pro-Kurdish People's Democratic Party (HDP).

During conversations with people in Kocaeli on Wednesday, Tarhan said that her party is welcomed by most people even though it is a newly established party among those who will run in the parliamentary elections on June 7. Saying she does not foresee a coalition government after the elections, she poured scorn on the main opposition CHP, claiming they are unable to cope with the ruling Justice and Development Party (AK Party).

"The clumsy opposition who could not cope with the AK Party, subsidizes the HDP at the moment. They are pinning all their hopes on [the HDP] by saying 'we can't defeat the AK Party but we wonder if [PKK leader Abdullah] Öcalan can defeat them.' Here, we are saying that this country can only see a true democracy if a party that can challenge the AK Party enters Parliament."

Tarhan, who resigned from the CHP after criticizing its "weak and wrong" policies, formed a new party before the upcoming national elections. In recent years, the CHP has been facing disintegration, as dissenting voices among party members become louder. The party administration was first criticized by Muharrem İnce, following the presidential election that resulted in disappointment for the party. The local elections, which took place five months before the presidential election, were likewise a failure for the CHP. Two subsequent stories of failure led party members to question Kılıçdaroğlu's ability to establish the right kinds of policies to achieve success.

In the August 10 presidential election, Tarhan's name was allegedly among those mentioned as presidential candidates, but these claims were dismissed both by her and the CHP. Following the CHP's loss in the presidential election, the 18th extraordinary party congress was held to elect a party leader in response to harsh criticism and intra-party opposition within the CHP. It was also asserted that Tarhan would announce her candidacy for the party leadership to compete with current chairman Kılıçdaroğlu, but these allegations were dismissed when CHP Deputy Chairman İnce announced his candidacy to run the opposition first.