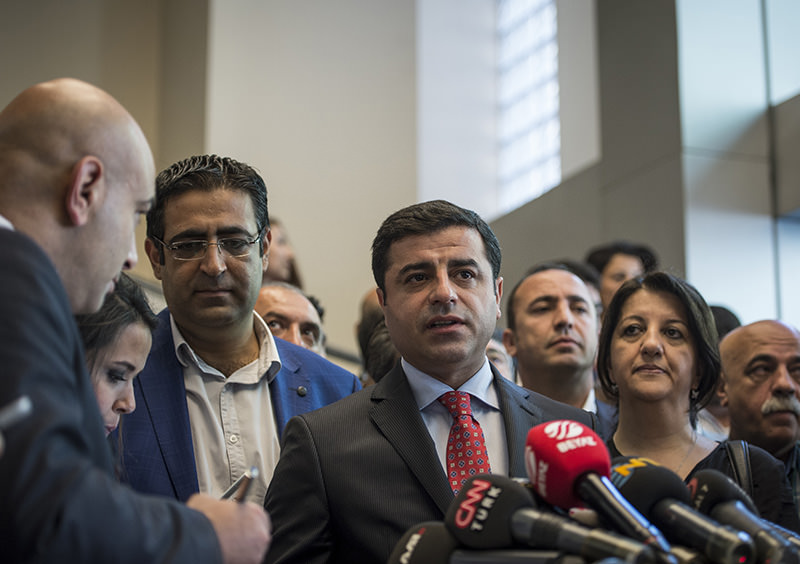 | AA Photo
by Daily Sabah Jun 11, 2015 12:00 am
The co-chair of the Peoples' Democratic Party (HDP) Selahattin Demirtaş spoke to the press early Thursday and said his party would consider all options to form a government other than allying with the Justice and Development Party (AK Party). Ambiguity continues over which parties will come together to form a government, after the AK Party lost the chance to do so single-handedly after Sunday's elections.

Although AK Party won the elections, receiving roughly 41 percent of the votes, the support it gained from voters was not sufficient for the party to reach a majority to form the government on its own. This has led the party to look for a coalition partner. However, the initial responses to a possible coalition with the AK Party were not positive.

On the night of the elections, the opposition leaders all made statements saying they would not consider forming an alliance with the AK Party. The AK Party put no options aside and refrained from taking a firm stance over any possible cooperation with an opposition party. The HDP, which surpassed the 10 percent election threshold and entered Parliament for the first time in the legislative elections, had said late on that they would not form a coalition with the AK Party.

Demirtaş reiterated the remarks a day after the elections. On Thursday, after a question from a reporter, the HDP co-chair said, "Pulling Turkey into early election debates right away will not help. We believe Turkey has to continue on its way by forming a coalition." Highlighting the significance of a political dialogue, Demirtaş said, "Turkey should not be afraid of early elections or coalitions."

He also added that his party was open to everybody and that they would review the opinions conveyed to them. In response to a question about whether his stance over not allying with the AK Party had altered, Demirtaş said they retained the idea of not being part of a coalition with the AK Party.

In a 15-point post-election evaluation statement released by the HDP, the party said the next government should immediately start drafting a civil constitution that acknowledges the multi-cultural, multi-lingual and multi-faith character of the public.

The party also said whatever coalition is formed, the next government should continue the reconciliation process that aims to end the decades-long conflict with the PKK.