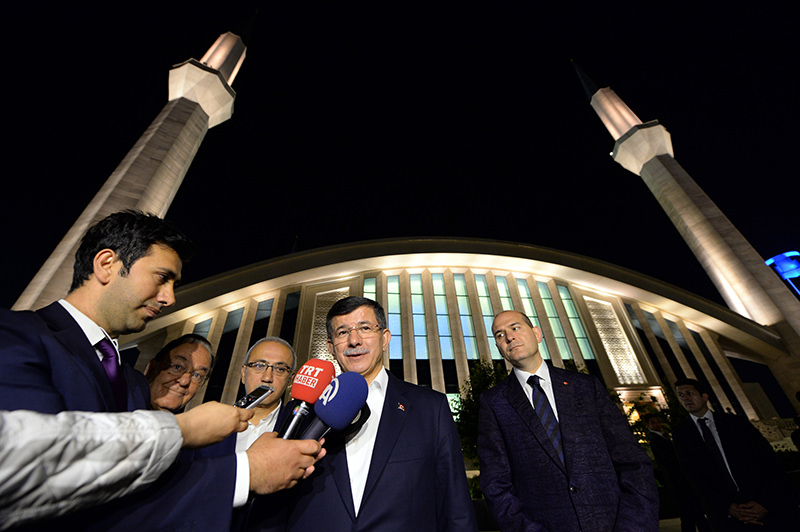 The AK Party will hold seperate meetings with each political party in an effort to form a coalition government, said PM Davutoğlu, adding that forming a minority government is the last option on the table

Prime Minister Ahmet Davutoğlu said on Wednesday that the AK Party prioritizes a coalition government but if things do not work out they could try forming a minority government as a last resort to ensure that Turkey is not left without a government in such a critical period.

"We are ready to do all we can to establish a coalition government. We have never threatened with early elections to force other parties into a coalition," Davutoğlu said while speaking at a live interview which aired on Turkey's Habertürk, Show TV and Bloomberg channels.

In response to a question about if the Turkish Prime Minister would approach the pro-Kurdish Peoples' Democratic Party (HDP) to form a coalition government; Davutoğlu said that he will make the necessary visits in line with his official duties. "I cannot say that I will not speak with a party which has received 13 percent of the Turkish nation's votes" he added.

Davutoğlu said it was only natural for the AK Party to assume leadership and establish a government as they have received the highest number of votes amongst other parties. He added that in the case this does not happen, the AK Party would make up the best opposition party, but this was not an option.

The AK Party won its fourth consecutive general election on June 7, securing the largest number of votes to claim 258 seats in Parliament, 18 short of a simple majority, according to the unofficial results.

Although the AK Party won the elections by receiving over 41 percent of the votes, the support it gained from voters was not sufficient for the party to reach a majority needed to form the government on its own, which has led it to seek a coalition partner. As none of the four parties that passed the 10 percent electoral threshold-the AK Party, the Republican People's Party (CHP); the Nationalist Movement Party (MHP) and the pro-Kurdish Peoples' Democratic Party (HDP) - had the majority necessary to form a single-party government, they are forced to negotiate to form some type of coalition following the opening of parliament with the ceremonial oath-taking by MPs later this month.

President Recep Tayyip Erdoğan is expected to ask the AK Party to form a government once the official results are announced by Turkey's Supreme Electoral Board (YSK), which is expected to take place on Thursday.

A new government must be formed within 45 days following the president's request, in line with Turkey's constitution. In the case that parties fail to establish a government, Turkey will have to hold early parliamentary elections.