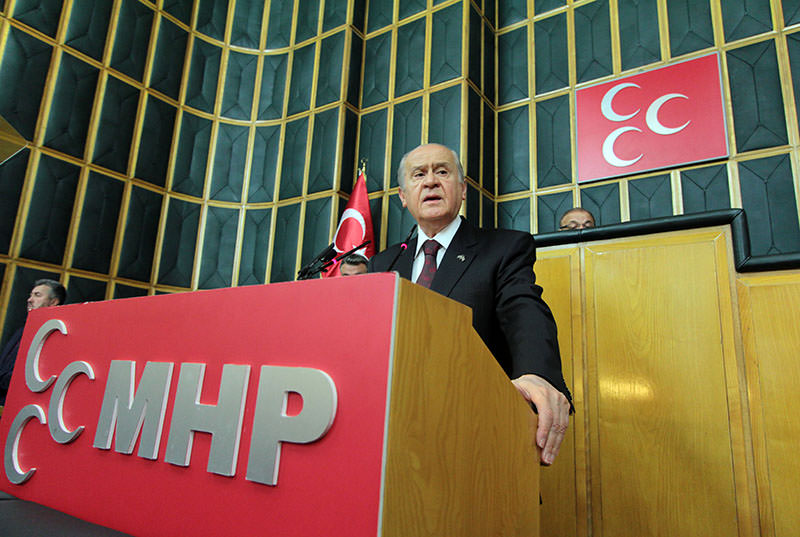 | IHA Photo
by Nurbanu Kızıl Jul 01, 2015 12:00 am
Devlet Bahçeli, the chairman of Nationalist Movement Party (MHP), threatened on Wednesday that he and all 80 of his deputies will give invalid votes in the Parliamentary Speaker Election if their candidate Ekmeleddin İhsanoğlu does not move on to fourth round.

No candidate received the mandatory two-thirds of the votes in the first two rounds, equivalent to the votes of 367 deputies. A third voting session will be held on Wednesday, where an absolute majority of the total number of deputies is needed, 276 being the lowest. A fourth round of balloting will take place between the two candidates who obtained the highest number of votes if an absolute majority cannot be obtained in the third round.

"We will be voting for our own candidate in the fourth round of elections as well, with all of our 80 deputies," Bahçeli said while addressing his party's first parliamentary group meeting early Wednesday.

He noted that their votes will be void if İhsanoğlu is unable to proceed to the fourth round of elections.

Bahçeli also underscored that his party will act as the main opposition, sending the message that they are not planning to take part in a coalition government.


He once again harshly criticized Kemal Kılıçdaroğlu, the chairman of Republican People's Party (CHP) for offering him prime ministry in return for joining a coalition with the pro-Kurdish Peoples' Democratic Party (HDP). "I wonder how Kılıçdaroğlu dares to present a prerogative to us, which was not given to us by the people?" Bahçeli said, claiming that Kılıçdaroğlu attempted to set up a trap against the MHP.


"The Turkish nation has entrusted the position of being the main opposition to the MHP," said Bahçeli.

He stated that everyone is obliged to respect the election results which allowed four political parties to enter the parliament.

Bahçeli underscored that the MHP will not toss out its 46-year old fundamental ideologies and critiques for the sake of participating in a coalition.

"We cannot explain it to millions of voters if we make concessions and give up our national stance," the MHP chairman said.

Previously, in response to speculations that all three opposition parties may form a coalition, the opposition leader also stated that the MHP will not be included in a coalition government with the pro-Kurdish Peoples' Democratic Party (HDP).

"How can we form a government with the political messenger of a terrorist organization whom ruthlessly kills babies, soldiers, police officers and thousands of innocent citizens?" Bahçeli said, noting that the MHP will never be on the same side with organizations which threaten the unity of the state.

He underscored that the Republican People's Party (CHP) should not waste its time trying to persuade the MHP to form a coalition government with the HDP, and dismissed all speculations that the MHP could be included in such a coalition, even when he was offered the seat of the prime minister by CHP chairman Kemal Kılıçdaroğlu.