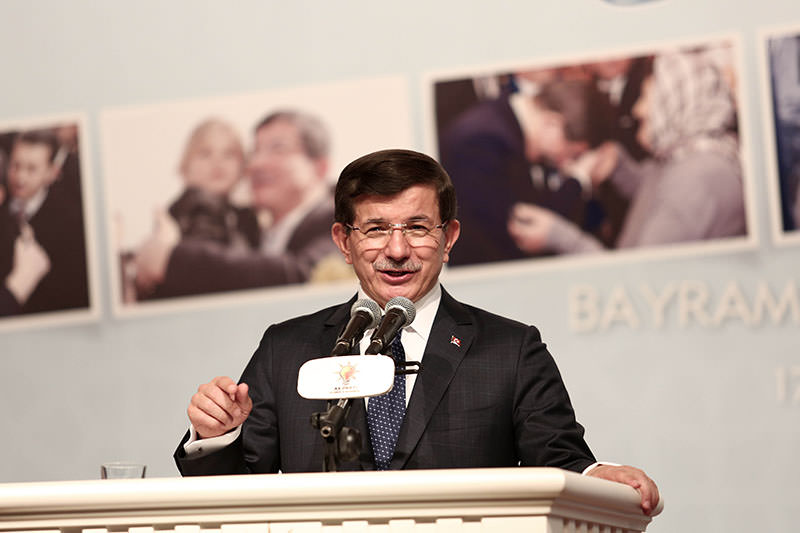 | AA Photo
by Daily Sabah Jul 17, 2015 12:00 am
Justice and Development Party (AK Party) Chairman and interim Prime Minister Ahmet Davutoğlu said on early Friday that Turkey's new government will be formed under AK Party leadership, and it will not be formed within a rotating prime ministership. Davutoğlu made the comments during a meeting to celebrate Eid al-Fitr of the AK Party officials at the party's Istanbul provincial office building.

Referring to Republican People's Party (CHP)'s leader Kemal Kılıçdaroğlu's initial hopes of forming a coalition that would reflect the desires of "the 60 percent bloc," effectively ruling out any governing alliance with the AK Party, Davutoğlu said, the "60 percent bloc claim has collapsed."

While the AK Party officials were discussing to do whatever was necessary for the good of the national will, the opposition was talking about the 60 percent bloc, Davutoğlu said.

"They have brought forward different scenarios for prime ministry, talked about a rotating prime ministerial system but these [scenarios] have not succeeded, and will not do so."

The prime minister advised the parties to make an effort in forming a coalition government in the leadership of AK Party, as opposed to wasting time in vain and closing their doors constantly since it is in Turkey's best interest to form a government as soon as possible.

Davutoğlu has once again called out to all political parties, especially the pro-Kurdish People's Democratic Party (HDP), for their cooperation in ending terror in Turkey. The prime minister said, the HDP needs to distance itself from terror.

"Let all of us, as leaders of four political parties, put our signatures under a declaration, and let us say, 'After the [June 7] general elections, all the four parties will lead the way for Turkey's peace and democracy as opposed to violence and terror'", the prime minister said.
Last Update: Jul 18, 2015 7:45 pm
RELATED TOPICS