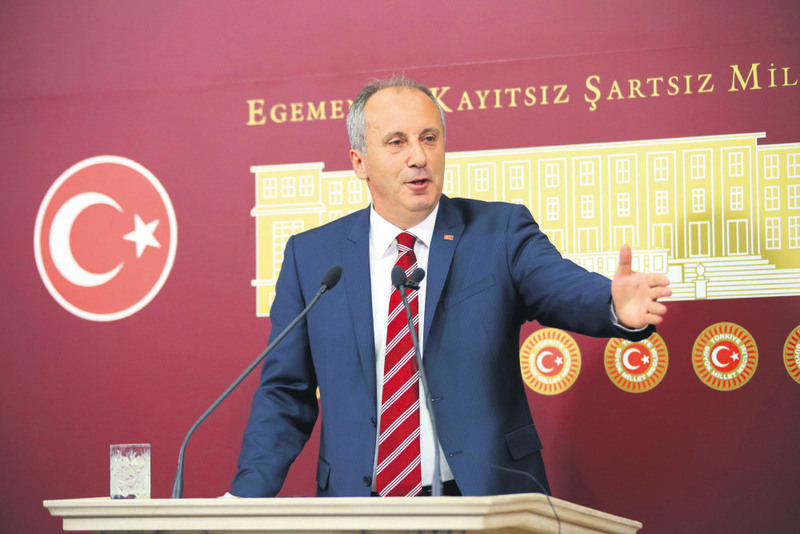 As parties prepare to hold the second round of coalition talks this week, the CHP faced an intra-party criticism from its Yalova deputy, Muharrem İnce. He slammed party's failure in elections and added that the AK Party's 41 percent support must be respected

Republican People's Party (CHP) Yalova deputy Muharrem İnce said his party was unsuccessful in the June 7 parliamentary elections and those who voted for the Justice and Development Party (AK Party), 41 percent, should neither be ignored nor underestimated.

Speaking in an interview with the Kemalist Sözcü daily on Sunday, İnce emphasized that the votes the CHP received in the elections should not be called a success, and reasoned the party's failing in increasing its votes for that. "There is no success here. The main opposition party could not increase its votes and the 13-year ruling party lost single-party rule with a gap of deputies by a hair. However, we are not the ones who made them lose either. It was the Peoples' Democratic Party [HDP] passing the threshold. Therefore, if we say that the CHP was successful we would both insult political science and be unfair to the CHP," he said.

İnce also said the 41 percent vote the AK Party received has to be taken into account and needs to be evaluated accurately. He said: "Sixty percent wanted the AK Party to go, but 40 percent voted for them as well. We need to peruse this correctly. You cannot ignore and underestimate this 40 percent. They convinced this 40 percent. Did they vote for us? They didn't. So it would be better to look at this issue from that perspective."

Furthermore, he said that some party members were treated unfairly by the party, including former Istanbul deputy Umut Oran, during the adjustment process of the party candidate list. "His entering primary elections was prevented by pledging to him that he will be evaluated within the contingent. If he could enter the primary elections, he would have been in a remarkable place. I had warned him before about this issue. I am saying this for the first time here, too. However, there is not only Oran who has been treated unfairly."

Last April, during the process in which the party's candidate list was set, figures close to the Gülen Movement did not find places in the list. According to the finalized CHP candidate list, Oran and Faik Tünay were excluded from the list due to their alleged ties with the movement.

Following the party's defeat with Ekmeleddin İhsanoğlu, its joint presidential candidate with the Nationalist Movement Party (MHP), in the 2014 presidential election, İnce had resigned from his position as CHP group deputy chairman and announced that he would run as a candidate against Kılıçdaroğlu to become the new chairman. In the extraordinary congress held in September 2014, he ran for the CHP chairmanship and lost to Kılıçdaroğlu. Yet the debates between him and Kılıçdaroğlu continued for a while.

Before last year's extraordinary congress, he gave nine reasons why Kılıçdaroğlu has largely failed to become a successful leader of the main opposition. İnce listed his reasons by saying that Kılıçdaroğlu does not believe in consensus and accused him of not taking CHP members' ideas seriously.

Asserting that Kılıçdaroğlu is far from being scientific, İnce said the CHP chairman does not know how to conduct perception management, nor does he conduct public opinion polls. Echoing his previous sentiments, he claimed that Kılıçdaroğlu likes the right-wing while keeping a distance from leftists. "He is far from assertive and is always ready to be the runner up," İnce added.

İnce also said Kılıçdaroğlu is distant from the public and does not understand its demands and expectations, adding: "He does not think about leaving his post at all and has become a politician obsessed with his position."
Last Update: Jul 19, 2015 9:09 pm
RELATED TOPICS