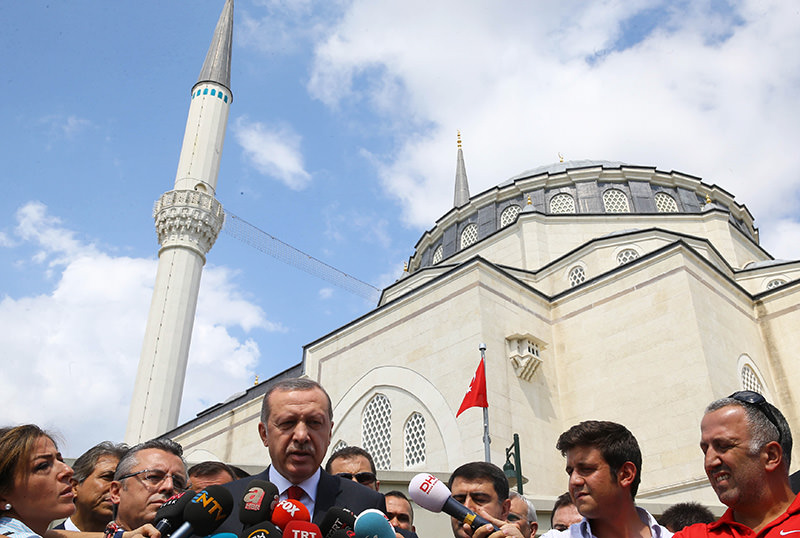 |AA Photo
by Daily Sabah with AA Aug 21, 2015 12:00 am
President Recep Tayyip Erdoğan has announced that early elections is to take place on November 1, following the failure of coalition talks between political parties.

Only two days were left till the August 23 deadline in accordancce to Turkey's Constitution to form a new government as President Erdoğan announced the final date for the early elections in a live press conference.

President Erdoğan had said on Wednesday that Turkey was rapidly moving toward an election and that only the will of the people can resolve the current political deadlock at the ballot box.

After weeks of talks with opposition, where parties failed to produce a coalition, interim prime minister and the chairman of the ruling Justice and Development Party (AK Party), Ahmet Davutoğlu, returned the mandate to form the next government to President Recep Tayyip Erdoğan on Tuesday evening.

Turkey went to the polls on June 7 to choose its lawmakers for the country's 25th Parliament, shaping the future of Turkish politics.

Following the June 7 general election which resulted in no single-party majority, Prime Minister Ahmet Davutoğlu was asked by President Erdoğan to form a new government on July 9 within a 45-day time frame, which ends on Sunday.

"After 45 days, I will meet my parliament speaker again and after this talk, we will hopefully bring our country to an early election," said Erdogan. "Hopefully, Turkey will again hold an election on Nov. 1."

The two significant outcomes of the elections were that the AK Party, which was vying for a fourth term of single-party power, had a clear victory but failed to secure the 276 seats required to form a government single-handedly, and the HDP attempt to pass the 10 percent national election threshold to make its way into Parliament, crushing the hurdle and receiving 80 seats in the chamber.

According to Turkey's constitution, when the 45-day deadline expires without formation of a government, the president can decide to hold a new election.
Last Update: Aug 21, 2015 4:17 pm
RELATED TOPICS