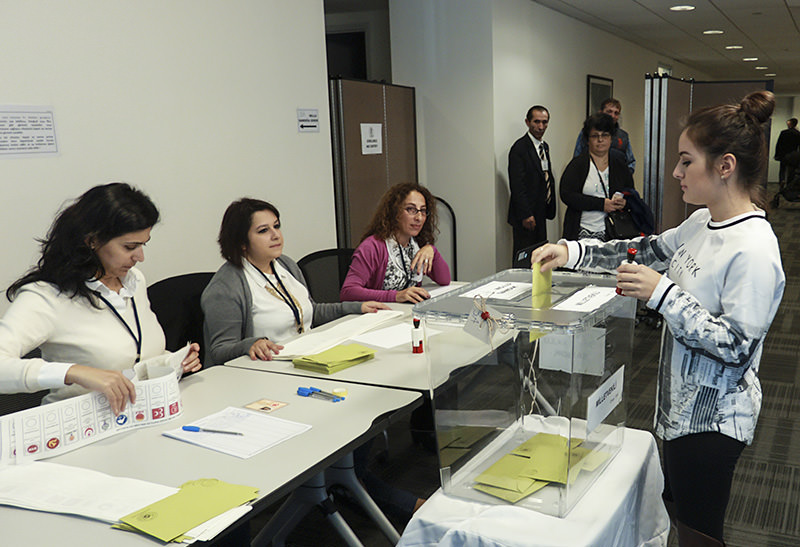 |AA Photo
by Merve Aydoğan
Oct 21, 2015 12:00 am
As Turkey readies for the Nov. 1 early elections, the findings of a recently conducted survey by Konsensus Research Company indicate the Justice and Development Party (AK Party) will receive the most votes in the Nov. 1 elections. It showed that the AK Party would secure 272 seats in Parliament, just four short of the number necessary to form a single-party government. The Republican People's Party (CHP) will secure 146 seats. It found a drop in support for the Nationalist Movement Party (MHP) after the June 7 elections, which would leave it with 57 deputies while the Peoples' Democratic Party (HDP) would receive 75 deputies.

Prior to the Supreme Election Board's (YSK) election campaigning bans as part of regulations, Turkey's polling companies are revealing their latest findings in efforts to predict the outcome of the elections. In this regard, Konsensus, which has been used as a reference by many media outlets, conducted a telephone survey with 2,002 individuals in all 81 provinces of Turkey. The majority of participants were either elementary or secondary school graduates and 56.7 percent were female. In the survey 44 percent of participants said they would vote for the AK Party and 28.3 percent said they would vote for the CHP.

The survey recorded a significant drop in support for the MHP compared to the June 7 election results, with 11.9 percent of participants saying they would vote for the party. The MHP received 16.3 percent of the vote in the June 7 elections. The survey also found a drop in support for the HDP for the Nov. 1 elections, declining from the 13 percent of the vote it received on June 7 to 12.5 percent, drawing ahead of the MHP.

Of those who had not indicated which party they would vote for on Nov. 1, 46.7 percent support the AK Party and 37.4 percent support the CHP. According to the percentages of support, Konsensus predicted that the AK Party would have 272 deputies followed by the CHP with 146. According to the survey, 94 percent of AK Party supporters said they had voted for the party in the June 7 elections and 19.3 percent of voters who had voted for parties other than the four represented in Parliament indicated their support for the AK Party for Nov. 1.

With less than two weeks left until the Nov. 1 elections, many research companies are publishing their latest findings, with one of the most recent being from MAK Consulting, which found the AK Party currently ranks as the majority party with 43.5 percent support. In addition to MAK's findings, an Oct. 3 to Oct. 7 survey by PollMark, which is also a leading research company, found the AK Party's support stands at 43.9 percent.

With both polling companies finding a significant increase in support for both the AK Party and the CHP, 51 percent of MAK participants predicted the AK Party will gain a majority and be able to form a single-party government.

The MAK public opinion survey conducted in face-to-face interviews with 5,500 respondents showed a significant decrease in support for the HDP, with 11.8 percent of participant showing support for the party, an almost 2 percent drop from their result in the June 7 elections. The PollMark survey, which included 5,184 people, showed support for the HDP at 12 percent and support for the MHP at 14.8 percent.MAK survey respondents said the recent terror attack in Ankara, which left more than 100 people dead and hundreds more wounded, was an attempt to destabilize Turkey. Furthermore, both surveys found that participants believe terror is the most important issue at the top of the country's political agenda with the elections and the economy the second and third most important, respectively. It is also expected that the votes from eligible Turkish voters abroad will significantly change the percentages.
Last Update: Oct 21, 2015 7:51 am