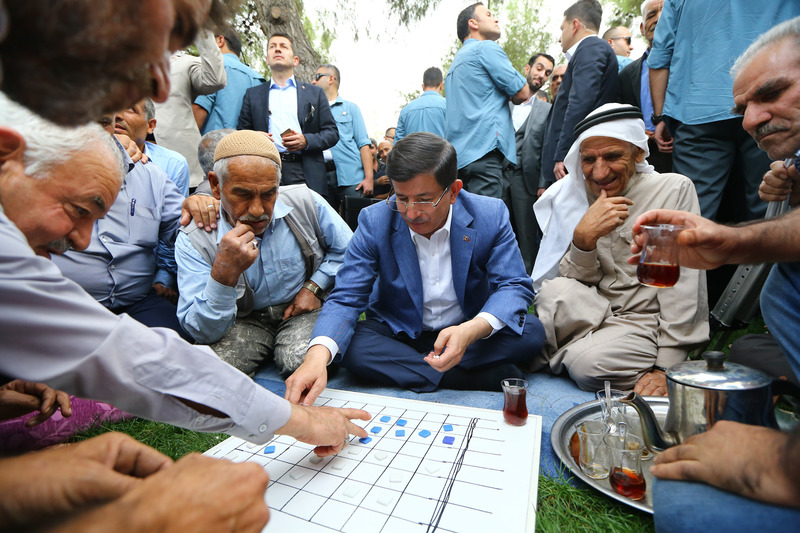 by daily sabah Oct 23, 2015 12:00 am
With a little over a week left until the general elections, Prime Minister and Justice and Development Party (AK Party) leader Ahmet Davutoğlu visited the southeastern provinces of Gaziantep and Şanlıurfa, which are both on the Syrian border, and met with nongovernmental organizations and the business community to explain his economic projects to provide more jobs and opportunities in the region. He unveiled some new projects for the region, including new organized industrial zones and a plan to connect the business town of Gaziantep to the Port of İskenderun with a tunnel so tradesmen in the province can easily get their goods to the Mediterranean.

He also promised a 25-kilometer railway between the two industrial zones in Gaziantep.

The AK Party's election manifesto includes projects it says will protect economic and financial stability, increase employment and support investments and production. The party preferred to announce concrete steps like promising to increase the minimum wage to TL 1,300 ($452.59) per month, unlike in its manifesto prepared for the June 7 general elections that used more general terms.

According to the AK Party's new election manifesto, the treasury redemption of up to TL 20 billion will be paid out through the Credit Guarantee Fund and the share of the finance sector in terms of gross domestic product (GDP) will expand. Through Treasury sources, the accessible funds to credit guarantee establishments will increase from TL 1 billion to TL 2 billion. An additional TL 10 billion will be given to the agriculture sector, and some taxation procedures regarding profits from the increase in the value of the housing sector will be revised. The credit used for financing of real estate properties will be revised considering its social and economic purposes. There will also be taxes imposed on luxury products and imports to discourage consumers from purchasing them.

As voters ready for the Nov. 1 early elections, the findings of a survey conducted between Oct. 13 and Oct. 19 by Konsensus Research Company indicate the Justice and Development Party (AK Party) will receive the most votes in the Nov. 1 elections. From the results it predicted that the AK Party would secure 272 seats in Parliament, just four short of the number necessary to form a single-party government, and forecasts 146 seats for the Republican People's Party (CHP). It found a drop in support for the Nationalist Movement Party (MHP) after the June 7 elections, which would leave it with 57 deputies while the Peoples' Democratic Party (HDP) would receive 75 deputies, according to Konsensus's calculations.

Many research companies are releasing their latest surveys, with one of the most recent being from MAK Consulting from Oct. 12 to Oct. 17, which found the AK Party as the majority with 43.5 percent support. In addition to MAK's findings, an Oct. 3 to Oct. 7 survey by PollMark found AK Party support at 43.9 percent.
Last Update: Oct 23, 2015 2:23 am
RELATED TOPICS