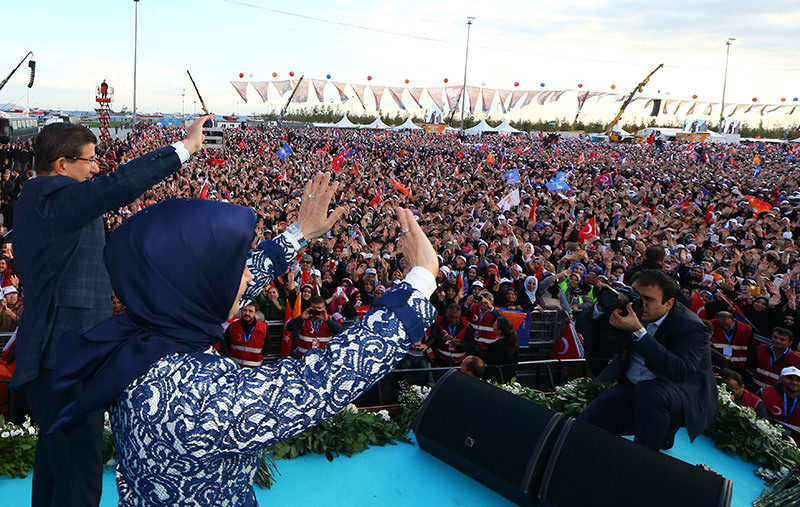 by Yunus Paksoy Oct 25, 2015 12:00 am
While the people of Turkey hold their breath with less than a week left until the Nov. 1 snap elections, the Justice and Development Party (AK Party) held a large rally in Istanbul on Sunday with hundreds of thousands of supporters where Prime Minister Ahmet Davutoğlu called on people to vote for stability and a strong single-party government.

Labeling attacks that have taken place in the country as attempts to block Turkey's way and negatively affect the Nov. 1 elections, Davutoğlu said his party will not allow any "vile ambush" targeting Turkey.

Davutoğlu targeted Peoples' Democratic Party (HDP) Co-Chair Selahattin Demirtaş and, pointing to the HDP's pledge to bring peace, Davutoğlu asked how it plans to do so while ditches are dug and children are killed. "Can those who bomb a state hospital be a remedy?" Davutoğlu asked.
Davutoğlu said the media depicts the 40-year-old PKK as a dove of peace, and added that operations against the terrorist organization will continue until all arms are buried and all mountains are cleared of terrorists.

Davutoğlu also levied criticism at Nationalist Movement Party (MHP) Chairman Devlet Bahçeli. Slamming Bahçeli for saying no to everything after the June 7 elections, Davutoğlu said: "Have you ever heard Bahçeli say yes? He said no to every offer we made. Bahçeli takes a back seat [and] assigns someone else to combat terror."

Saying that the AK Party shouldered responsibility following the June 7 elections, Davutoğlu criticized the three other parties that passed the 10 percent national election threshold for trying to exclude the AK Party. He told the crowd that the three failed and came to realize that a government cannot be formed without the AK Party.

Davutoğlu also said the AK Party will make reform after reform should it be able to form a single-party government, adding that economic pledges will benefit the youth and retirees most. Pledging to provide free Internet connection to youth, Davutoğlu also said young entrepreneurs will receive up to TL 50,000 ($17,195) from the government.

He said they would increase the minimum wage to TL 1,300 per month and retirees will receive up to TL 1,200 a year as a bonus. Pensioners will also have the chance to buy a new house with monthly installments of around TL 250.

Speaking to Daily Sabah about the crucial week before the Nov. 1 elections, the chairman of the polling company GENAR, İhsan Aktaş, said nationalist votes are in decline while support for center parties seems to be on the rise.

Explaining that the AK Party preserved its votes after the June 7 elections and improved on them, Aktaş said the HDP has mainly sought to maintain its voters who comfortably brought the pro-Kurdish party into Parliament.

"A single-party government is on the horizon," Aktaş predicted, with the caveat, however, that it will remain unknown until the elections.

Aktaş further claimed that the AK Party will acquire the 3 percent or 4 percent that it needs to form a single-party government on Nov. 1. "This week will be crucial. The AK Party will attempt to snatch the vote of those who preferred to not go to the polls in the previous elections."

Objective Research Center (ORC) head Mehmet Murat Pösteki spoke to Daily Sabah ahead of what he also called a crucial week and hinted at the high possibility of the AK Party receiving enough votes to form a single-party government.

"MHP voters will play a key role in defining whether the AK party will be able to form a single-party government," Pösteki said, pointing to a sharp decline in MHP votes in surveys. Yet, he left the door open for MHP voters to change their minds because of their strong loyalty the party.

Arguing that the AK Party seems to be shy of a couple seats in Parliament with only a week left until the elections, Pösteki also emphasized the significance of the expat vote, which he claims highly favor the AK Party.
Last Update: Oct 25, 2015 10:55 pm
RELATED TOPICS