Erdoğan calls on int'l media to start respecting people's will 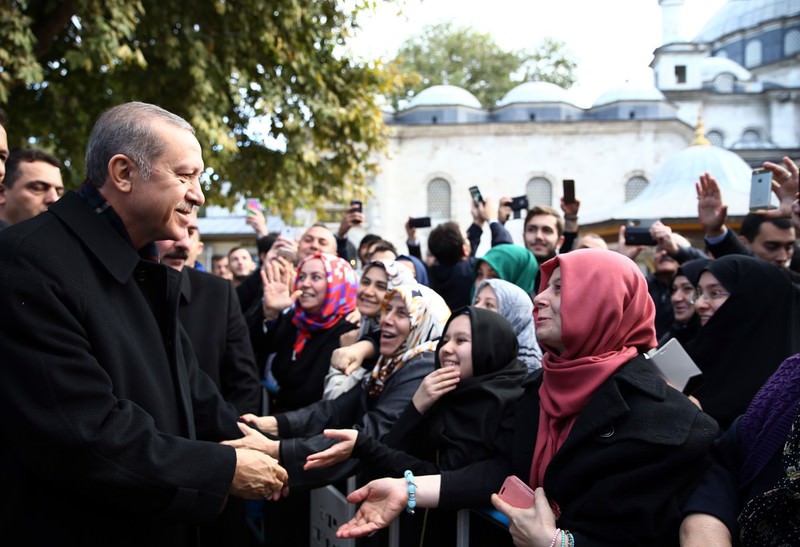 Amid the international media's firing arrows of criticism at President Erdoğan, he urged them to accept and respect the AK Party's landslide victory in Sunday's elections, saying that the will of the people in Turkey is superior to any smear campaign effort in global media

Facing harsh criticism from many international media outlets, President Recep Tayyip Erdoğan called on media worldwide and its allies in the country to stop interfering in the country's politics through defamatory publications that undermine the national will of the people in Turkey. Speaking after performing prayers at the historic Eyüp Sultan Mosque in Istanbul early on Monday, he said: "It is not right to take this personal, but why does the world media not look at their countries rather than having such an interest in our country? A political party came to power with 50 percent now. The entire world needs to respect this."

Erdoğan's statement came on the day of the Justice and Development Party's (AK Party) election victory, but foreign media outlets continued criticism at the same level and were accused of ignoring journalistic ethics. Erdoğan was elected as president in August 2014 and Ahmet Davutoğlu took over for him as prime minister and AK Party chairman. Some reports and analyses in various prominent papers and magazines have disregarded this.

Many newspapers and magazines called the election results Erdoğan's victory that would favor his authoritarian tendencies.

Only three days before Sunday's election, The Economist weekly took a harsh tone against Erdoğan and the AK Party. "Turks should not vote for the ruling Justice and Development Party on Nov. 1," the title of an editorial read. The weekly accused Erdoğan of fueling the fight with the PKK, undermining that it was the terrorist organization that ended the cease-fire on July 11.

Erdoğan later criticized the accusation directed at him during a visit to Rumeli Hisarı Museum in Istanbul. He said: "What business is this of yours? Take care of the elections in your own countries."

"Chanting my name and using the party's name to say: 'Do not vote for it,' in Turkey's election is ugly and is far from political ethics," he said.

Following the elections, various international media outlets' stance remained almost the same. The lead sentence in an article in The New York Times says: "In a stunning electoral comeback, the Islamist party of President Recep Tayyip Erdoğan regained its majority in Parliament on Sunday, ensuring Mr. Erdoğan's continued dominance of Turkish politics after months of political turmoil and violence." The AK Party, which receives votes from all segments of the society, including Alevis, Armenians and the Roma community, contends the party's Islamist label since it has members from all parts of society.

"The victory, at the same time, seemed to validate Mr. Erdoğan's electoral strategy of turning more nationalist and taking a harder line with Kurdish [PKK] militants in the southeast, where a long-running war resumed in recent months," the article said, not mentioning that 1 million voters, many Kurdish, who gave the pro-Kurdish Peoples' Democratic Party (HDP) a chance in the June 7 election came back to their original party and lead to an extra 10 to 15 AK Party deputies from Kurdish majority regions of the country.

An article in The Wall Street Journal says "Turkish President Recep Tayyip Erdoğan's political party staged a stunning comeback Sunday, winning over voters with its message that a single-party rule was the only way to fight a two-front war with Islamic State [of Iraq and al-Sham] extremists and Kurdish militants."

The U.K.-based Guardian headlined the election story as "Erdoğan's [AK Party] returns to power with outright majority – as it happened," with another article titled "Turks could pay high price for stability promised by Erdoğan."

German newspaper Die Welt ran the headline, "A Black Day for Turkey," reflecting the continuous subjective perspective of the country's media against Turkey and Erdoğan.

Dozens of articles have been published in several German newspapers depicting and defining the fight against the PKK as Erdoğan's battle against Kurds.

"The triumph of Erdoğan's party" was the headline in Switzerland's Tribune de Geneve. The newspaper described the win as "brilliant revenge" following June's results.

An article in the country's Blick daily said the victory paved the way for constitutional changes to strengthen "presidential powers."

French news agency Agence France-Presse (AFP) said the AK Party had succeeded "against all odds" and published the headline, "Turkey: Erdoğan, revenge of the 'sultan' challenged."