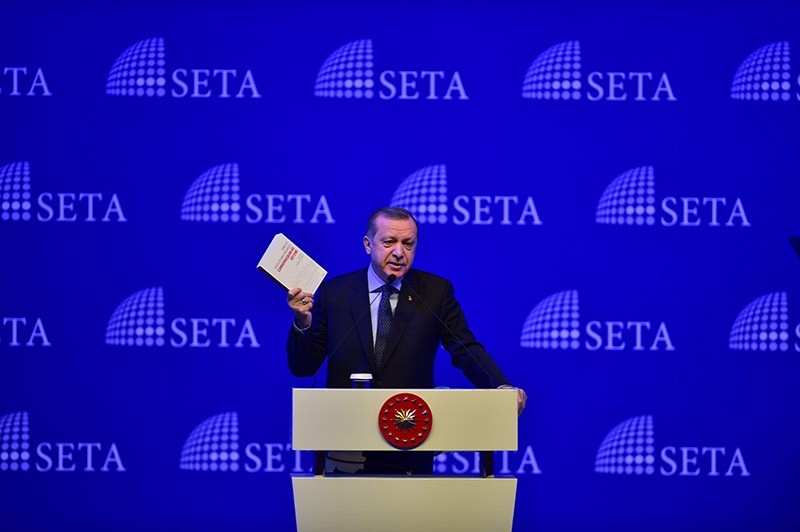 President Erdou011fan holds a SETA publication on the proposed presidential system, which will be voted in a referendum on April 16. (Sabah Photo)
by Daily Sabah Feb 12, 2017 12:00 am

President Recep Tayyip Erdoğan and the opposition MHP leader Devlet Bahçeli underlined that the presidential system, which has been proposed in the new constitutional changes and will be voted on in a referendum on April 16, strengthens democracy as it gives the administration directly to the people and makes the separation of powers more apparent

Since the Supreme Election board (YSK) recently announced that the referendum on constitutional reform will be held April 16, President Recep Tayyip Erdoğan and opposition Nationalist Movement Party (MHP) Chairman Devlet Bahçeli underscored that the new governing system, which will switch the system from a parliamentary to a presidential one, allows the administration of people directly, further strengthening democracy in Turkey.

"The president, who will carry out his executive duties, must keep an eye on the public because he is responsible for the people at every step," Erdoğan added.

In addition to President Erdoğan's remarks, MHP leader Bahçeli reiterated that his party would vote "yes" in the upcoming referendum, saying that with the new system the division between the separation of powers will be clearer.

The proposed constitutional reform by the ruling Justice and Development Party (AK Party), which is also backed by the MHP, aims to put an end to decades of political crises that paralyzed the country, as stated by numerous government officials. On that note, President Erdoğan, in his recent remarks, stated that the presidential system discussed today is not a newly emerging issue but rather has a profound and compelling history that led up to the result, saying: "The issue is by no means an issue of the Republic of Turkey. The issue is by no means a democracy issue or a freedom issue. The system that we are discussing is the best solution for both Turkey and the Turkish nation's centuries-old survival problem." He added: "The issue here is Turkey's efforts to build a stronger, more resilient system of government that is more appropriate for achieving its goals in light of its experiences. The greatest assurance of the presidential system is that it has truly democratic characteristics."

While he urged all citizens to vote "yes" in the upcoming referendum on constitutional reform, Erdoğan told attendees at the SETA symposium: "The presidential system of government gives the administration directly back to the people. The president, who will carry out executive duties, has to keep an eye on the public because he is responsible for the people at every step."

Meanwhile, speaking at a press conference following his party's board meeting on the upcoming constitutional referendum, Bahçeli once more strongly criticized those claiming a "regime change" with the constitutional reform also asserted, "It is clear that we are going to our people to change the system of government." As the opposition party leader said the system change would elucidate Turkey's way of governing structure, he also said that the Constitution's first four articles that define the fundamentals of the Republic "will no longer be a topic of discussion."

The proposed law gives executive powers to the president and vice presidents, while abolishing the post of prime minister and lowering the age of candidacy for Parliament from 25 to 18 years of age, increasing the number of parliamentarians from 550 to 600 in accordance with the country's growing population. The number of Constitutional Court members will also be decreased from 17 to 15.

The president will be able to appoint presidential aides and ministers on his or her own and will also have the right to dismiss them. In addition, there will be no "Council of Ministers," but there will be ministers. Moreover, the president will have both executive power and authority within the limits of the law. Aside from the change to an executive presidency, other reforms include allowing the president to maintain party political affiliation. There are also changes to Turkey's highest judicial body, which will be renamed while retaining its independence and its own budget. The reform package sets 2019 as the date for the next presidential and parliamentary elections.