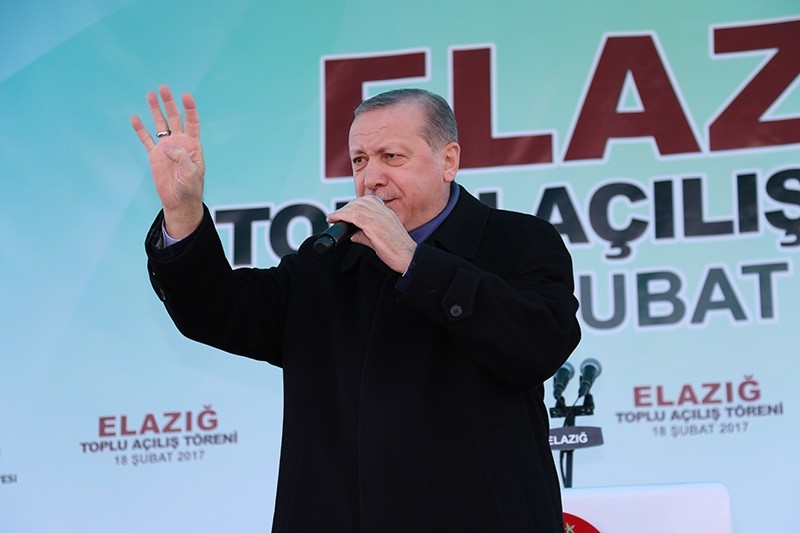 President Recep Tayyip Erdoğan continued his rallies for "Yes" campaign for the upcoming referendum on presidential system in eastern provinces of Elazığ and Malatya on Saturday.

Speaking at an opening ceremony for infrastructure projects in eastern Turkey's Elazığ province, Erdoğan said the campaign for a Yes vote for the April 16 referendum on constitutional changes would continue.

Erdoğan has voiced his support for the constitutional change that would lower the minimum age to become a lawmaker from 25 to 18, citing the example of powerful companies who employ young chief executive officers.

"We would also like to see ages of ministers going down to 18 from 25 years. Is that possible? Why not! Today, 25-year-old, 30-year-old young people are running giant corporations of the world," he said.

Under the proposed changes to the constitution, minimum age for parliamentary candidates would be reduced to 18 from 25.

The president said Turkey needs idealism and energy of youths, adding he "wants to see elected young people between the ages of 18 and 25 in the Turkish parliament."

Erdoğan kicked off the Yes campaign on Friday after the official referendum schedule was announced by the Supreme Election Board. The campaign began in southern Kahramanmaraş, one of the areas that gave him the most votes in the 2014 presidential polls.

"Turkey has finally achieved the appropriate management system which has been seeking for years. The name of this system is the presidential government system," he said.

Referring to opposition to the constitutional changes, Erdogan said those who objected to the new system do not want it because it "is going to destroy their own interests and revealing their own bad intent."

Constitutional reform has been discussed since then-Prime Minister Recep Tayyip Erdoğan was voted president in August 2014.

The reforms would remove parliament's power to question ministers or stage a confidence vote in the government. The minimum age for parliamentary candidates would be reduced to 18 and the number of deputies will rise to 600.

Turkish nationals overseas will be able to vote in the referendum between March 27 and April 9 at polling stations in embassies and consulates as well as at Turkish ports and airports. These votes will be tallied in Turkey on referendum night.

The political parties can campaign until 6 p.m. on April 15.

The bill of constitutional changes was passed by parliament in January, with 339 votes in favor -- nine more than needed to put the proposals to a referendum.