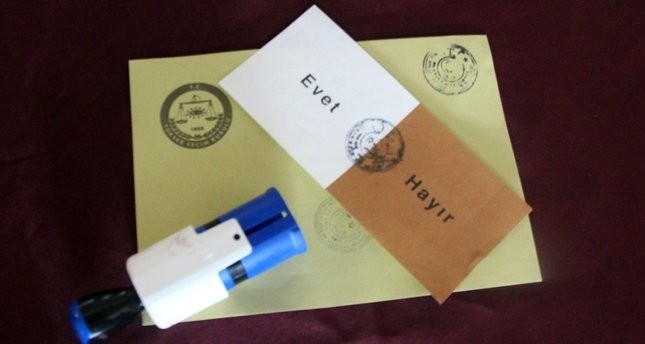 Foreign Minister Mevlut Çavuşoğlu has said he expects 63 percent 'Yes' votes in the upcoming referendum on constitutional reforms in Turkey.

Speaking to journalists in Istanbul Sunday, Çavuşoğlu said some surveys suggest current percentage of Yes votes to be over 58 percent, adding that more people are expected to vote Yes.

He also said the rate of voting has increased by more than 30 percent abroad compared with the previous presidential election.

"I hope there will be more. The citizens have a lot of interest," he said, adding he expects voter turnout abroad to be over 50 percent.

The overseas turnout was 8.32 percent in the 2014 presidential election, which was the first time Turkish nationals were able to vote from abroad.

Around 3 million Turkish expats are eligible to vote at Turkey's 120 diplomatic missions in 57 countries. The overseas voting, which started Monday, will end on April 9.

Voting centers abroad remain open from 9 a.m. to 9 p.m. local time at such missions "so the citizens can also go to vote after work," Çavuşoğlu said.

In Turkey, 55.3 million eligible voters are expected to cast their ballots on April 16 to vote on a constitutional amendment in a historic referendum that may see Turkey shift to a presidential system.

The constitutional changes have been discussed ever since President Recep Tayyip Erdoğan was elected president in August 2014. The 18-article bill was passed by Parliament in January, with 339 votes in favor of the bill, nine more than needed to take the proposal to a referendum.

The reforms would abolish the post of the prime minister and the president would be allowed to keep his ties to a political party. Other changes would include a change to the minimum age for parliamentary candidates reduced to 18 while increasing the number of deputies to 600. Under the proposed new constitution, simultaneous parliamentary and presidential elections would be held in November 2019 and the president-elect would serve for a five-year term.