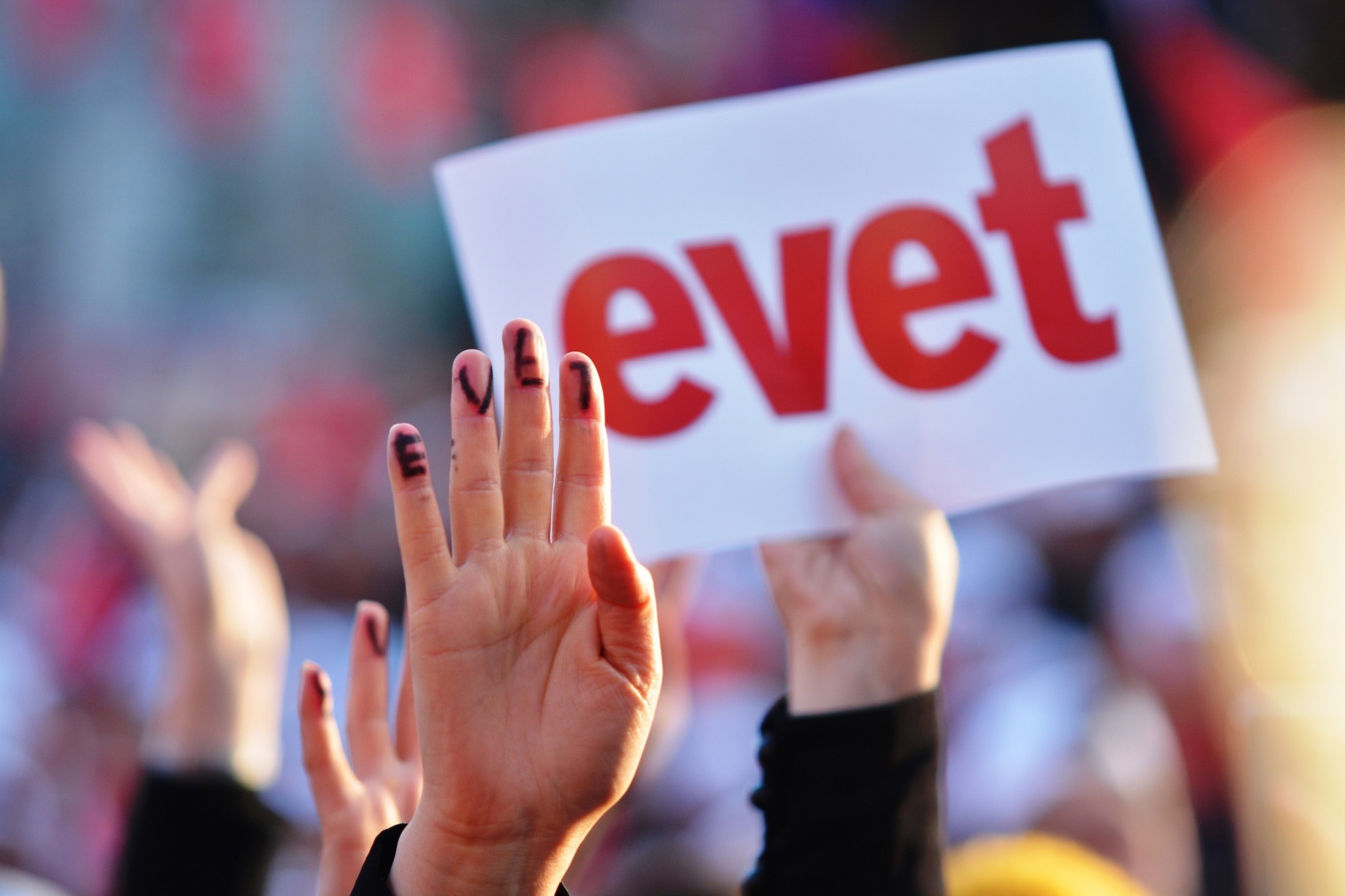 The majority of the pre-referendum polls indicate over 50 percent support to the proposed constitutional changes.
by Daily Sabah Apr 06, 2017 12:00 am

With only 10 days left until the referendum on a constitutional amendment package designed to switch Turkey's current parliamentary system to a presidential one, opposition Nationalist Movement Party (MHP) Deputy Chairman Semih Yalçın said Wednesday in a televised interview that "the 'yes' votes will further increase as April 16 approaches. The outcome of the referendum will eventually be 'yes.'" The majority of the public surveys indicate over 50 percent support by the Turkish nation for the constitutional amendment package. MHP official Yalçın further underlined that his party gets feedback from the public and stressed that "the people will clearly make the final decision."

Speaking in an interview on A Haber Wednesday, MHP's Yalçın underlined that the "yes" votes are leading and are to further increase as the referendum date draws near. He further criticized main opposition Republican People's Party (CHP) Deputy Hüsnü Bozkurt's threatening remarks against the "yes" voters and said, "There is a CHP that does not even understand Atatürk [the founder of modern Republic of Turkey]." Yalçın stressed that referring to the citizens as "intruders" in the country is a "corrupted ideology and is absolutely unacceptable."

Furthermore, President Recep Tayyip Erdoğan addressing nearly 2,000 Muhtars, elected village and neighborhood heads, Wednesday at the Presidential Palace indicated that the last few days before the referendum are highly significant. Erdoğan stated that amending the content of the governing system of the country via the referendum has "historical" importance.

Underlining that one of the greatest features of the new governing system is enhancing the power of the national will on the administration of the country, the president said, "The Presidency and Prime Ministry will be under one roof" to avoid any disputes and a "two-headed system." Calling on all political party supporters including the CHP and the Welfare Party (SP) to unite together for the change, Erdoğan said "come and let's make a national, domestic alliance on April 16. Let us join to further enhance Turkey, a greater Turkey."

Criticizing CHP Chairman Kemal Kılıçdaroğlu over his "deceitful" remarks on the constitutional amendment package, the president added, "Creating 180 lies on an 18-article constitutional amendment and confusing the minds of citizens is not being an opposition. Turkey cannot go forward with such an understanding of the opposition." He further added that Turkey will make a great "leap" forward via the amendment.

President Erdoğan finalized his remarks by strongly criticizing CHP Deputy Bozkurt's controversial remarks, saying, "This is the definition of the separatist mind, dividing the country." He also criticized the CHP head over his lack of reaction against the scandalous remarks and said "you must dismiss this man [from the party] if you can't, then the CHP will diminish." Erdoğan also affirmed that "our people will give the necessary response to them on April 16. We will put those people who are the last of their breed remaining from the single-party era in Turkey in the museum."

Meanwhile, Prime Minister Binali Yıldırım speaking in İzmir Wednesday touched upon the significance of the people of İzmir during the Independence War to repel the enemies and save Turkey. Prime Minister Yıldırım once again criticized CHP's Konya Deputy Bozkurt over his recent statements. Bozkurt said, "No one should get carried away if the referendum results is a 'yes' win. We will once again hunt you down starting from Samsun, all the way to İzmir [referring to Turkey's War of Independence against European powers]." On the contrary to Bozkurt's attitude threatening those in favor of the constitutional amendment, Prime Minister Yıldırım expressed his trust in the Turkish people living in İzmir. He said, "An impertinent person [Bozkurt] was saying 'we will throw the 'yes' voters into the sea [like enemy forces]. İzmir knows the betrayers very well. İzmir protects both Turkey and its flag."

Prime Minister Yıldırım also criticized the "no" supporters on the terrorist front such as the PKK and the Gülenist Terrorist Group (FETÖ). Claiming that the CHP has "incorrect" motivations by standing side by side with the terrorist groups, the prime minister said that the CHP, established in 1919 by Mustafa Kemal Atatürk, does not abide by his principles. "Atatürk's party does not respect Atatürk's advice to reach unity, solidarity, brotherhood and a level of contemporary civilization. They understood Atatürk's advice as tutelage and are following those who desire tutorship [in Turkey]. [However] We are with the Turkish nation," Yıldırım added.
RELATED TOPICS