All colors, voices represented on streets ahead of referendum 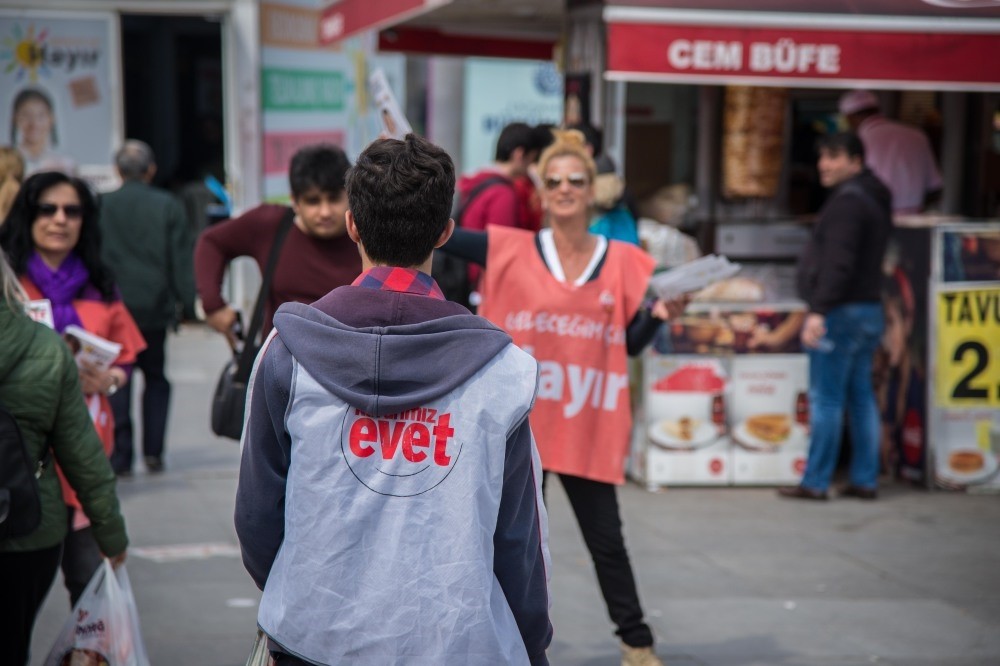 Both yay and naysayers make their propaganda with brochures, banners, Turkish flags and jingles. (Photos by Yunus Paksoy)
by Yunus Paksoy - Şeyma Nazlı Gürbüz Apr 08, 2017 12:00 am

Citizens from different backgrounds, political parties and ideologies flock to the streets to have their say in the free and democratic referendum campaign with less than 10 days left until the crucial ballot

Wandering the streets of the relatively conservative Üsküdar district in Istanbul can seem overwhelming with loud "yes" or "no" vote jingles being blasted by different parties for the upcoming April 16 constitutional referendum. While some campaigners are against the constitutional amendment, even shouting, "No to one-man rule!" those in favor of the "yes" vote "for a bigger and better Turkey" were also at the Üsküdar pier. No matter the side, the voices of both yay and nay-sayers are even stronger now that the crucial day draws near. All over the city, volunteers distributing brochures about the constitutional changes have been crossing paths with pedestrians in the streets.

From the Republican People's Party (CHP) to the Nationalist Movement Party (MHP) and the Peoples' Democratic Party (HDP) as well as others, anyone who wishes to partake in the referendum campaign has the chance to back a side with less than 10 days left until the vital ballot.

Necla, who wanted to her surname to remain anonymous, walks to the pier every day to contribute to the CHP's "no" efforts. The 69-year-old is confident that the "no" votes will outweigh the "yes" in the ballot boxes on April 16. "There have not been any obstacles or quarrels preventing our work here," she said, adding that she distributes "a lot of" brochures every day. The nationalist MHP's tent stands right next to the CHP tent on the Üsküdar pier.

Kadıköy is considered an opposition stronghold in Istanbul, and its diversity of propagandists mirrors Üsküdar. A tent set up by the HDP in front of the Kadıköy pier displays the photos of HDP co-chair Selahattin Demirtaş and Figen Yüksekdağ. Without hindrance since the launch of the campaign, HDP supporters have been informing people about the constitutional changes.

A HDP supporter distributing leaflets near the tent, who also wanted to remain anonymous, said they have experienced only a couple of negative incidents since they erected the tent. "Other than that, we are comfortable here," she said.

A tent set up by the Justice and Development Party (AK Party) stands less than a hundred meters away from the HDP supporters. Hanife, 60, has been a resident of Kadıköy her whole life. When asked why people should vote "yes," Hanife said: "Why? Look. I'm illiterate, but this here works," she said, pointing to her head.

"Every foreign role is against the constitutional changes. You see Germany, the Netherlands and others," the 60-year-old argued, expressing her confidence that "yes" votes will prevail in the district.

Dilek Güngör, a "secular and modern" naysayer in her 40s from western Turkey, was seen waving a Turkish flag passionately in the Beşiktaş district at another opposition stronghold, shouting: "We want a free country! No to the one-man regime!"

Engaging in fierce discussions as to why citizens should vote "no" in the referendum, Güngör said she has already received offers from the "yes" campaign to join them. "They have seen that I can explain the propaganda so well that the 'yes' campaign wants me," she said, smiling.

Each tent has its own way of defending their campaign for the upcoming referendum. At the CHP campaign in Kadıköy, for instance, there are exhibition-style boards showing both the existing and proposed versions of the constitutional articles, focusing on the principle of "why people should vote 'no'."

The HDP campaign has adopted a different way of persuading people to vote "no" in the referendum. "We work for you, for our women and for their future," a volunteer for the HDP asserted in front of the tent in Kadıköy. There is also a corner outside the tent where people take a photo in front of "no" prop.

Similar approaches are also evident among the "yes" tents. The MHP tent immediately differentiates itself from others with its unique idealist and nationalist propaganda campaign songs. Several young nationalists were dancing to the beat while making the party's iconic wolf symbol with their hands. "We would be able to do more if we had more resources. Still, we are in pretty good shape as far as our campaign is concerned," said an MHP supporter sitting in front of the tent, adding that they hand out around 5,000 brochures every day.

Confidence is a common theme across all of the campaigns, drawing attention in the area. "Actually, I would be shocked if the 'yes' votes prevail," said a CHP supporter in Kadıköy, indicating that she has worked for many election campaigns and has never been so sure of an outcome.

Some naysayers argue that even the government circles "have not been quite sure of the referendum results ahead of the vote." However, Meryem, who studies at Üsküdar University and also contributes to the AK Party campaign in Üsküdar, painted a completely different picture by suggesting that she expects the "yes" votes to prevail, putting her prediction at 68 percent.

"We can do even better if we work harder," she added, while expressing her confidence in the referendum results. "We always run out of brochures and ask for more to hand out. People have shown a lot of interest in our campaign."

Both of the fronts are not limited to the aforementioned four political parties. The Neo-nationalist Patriotic Party (Vatan Partisi) vehemently opposes the constitutional changes as well.

Having set up a tent in Üsküdar, the Patriotic Party members are also rooting for a "no" vote.

The squares are also open to non-partisan elements. Law students are offering legal counsel to citizens pro bono regarding the legal aspects of the constitutional changes. Regardless of the partisan ideas, the university students have had their say in the referendum campaign.