Erdoğan calls on followers of smaller parties to say ‘yes' 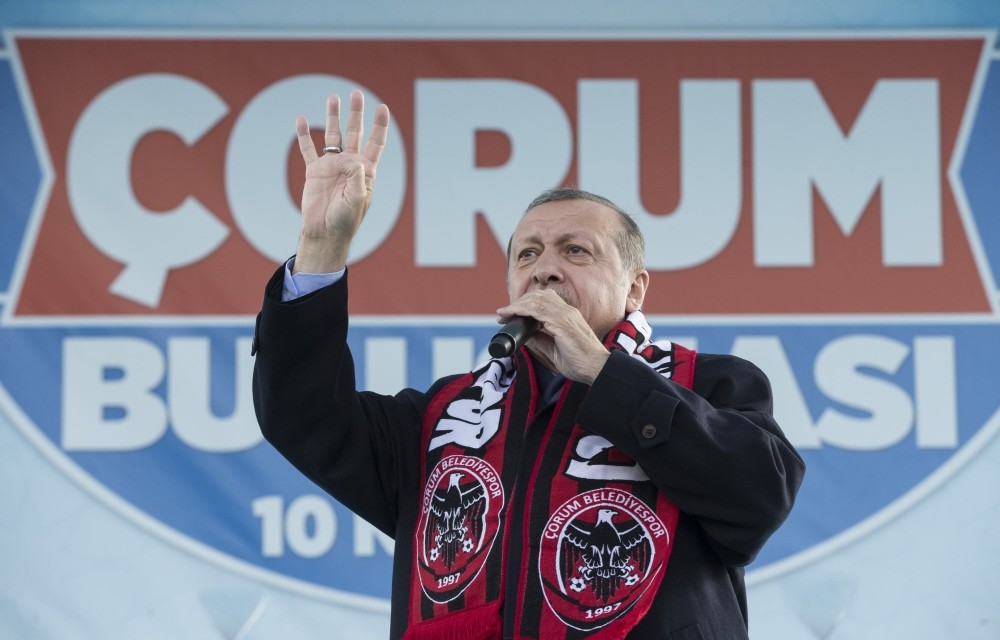 With less than week left before the April 16 referendum, President Erdoğan called on the followers of smaller parties to support the ‘yes' campaign, emphasizing the importance of unity for Turkey's future

With only five days left until the referendum for the constitutional amendment package, Turkey's President Recep Tayyip Erdoğan addressed a large crowd in the northern Anatolian city of Çorum, where other smaller parties were invited to support the "yes" campaign for the April 16 constitutional referendum.

"We would have wanted all of the parties to come together. The constitutional reforms are not only about one party. It is about the country's future. The changes are not about a person," the president said, adding that those who are bothered by the changes are those who want to sink Turkey.

Stressing that the Justice and Development Party (AK Party) and the Nationalist Movement Party (MHP) shouldered the burden of preparing the constitutional package, Erdoğan said now it is the people's turn to cast their votes.

"Come and let's join forces," the president said, addressing the AK Party, MHP, Great Union Party (BBP), Felicity Party (SP) and the Republican People's Party (CHP) voters. "Those who want to rule the country will go and convince the people," he contended, adding that some people do not understand the significance of this "historic reform."

"God willing, we will disappoint those who want to divide the state. We will teach those shaking their fingers a proper lesson," he asserted.

The president also strongly criticized CHP Chairman Kemal Kılıçdaroğlu over his controversial claims saying that the July 15 failed Gülenist coup attempt was a "controlled coup." President Erdoğan further noted that on April 16th Turkey will be opening doors to a "new, fresh" era.

Touching upon the upcoming referendum and the 'no-bloc', President Erdoğan reminded the crowd of the supporters of 'no' and said "who is saying no? İmrali [prison in which PKK leader Abdullah Öcalan is in], Qandil [headquarters of the PKK], FETÖ are saying no." Erdoğan however did affirm that the country will further be strengthened following the 'yes' votes from April 16th. He also added that on April 16th Turkey will be opening doors to a "new, fresh" era.

Meanwhile, speaking at "Alarm Clock with İsmail Küçükkaya" on Fox TV, Prime Minister Binali Yıldırım made evaluations regarding the upcoming referendum. He stated that the disagreements between the prime ministers and presidents create crisis within the political system of the country.

"Any system that is not based on the national will can neither be successful nor permanent. Since our constitution is prepared after a coup d'état, it seems like there is a hidden power that doesn't let this system to work properly," he said, while indicating that only one will is needed for the system to work properly. "If there is no will, there is no administration," he added. Stating that the new system is both national and native, Yıldırım said that when transforming from sultanate to republic, Turkey got some laws from the other countries but in this 94 years, it gained its own experiences and now is able to establish its own administrative tradition.

On April 16, 55.3 million Turkish people are expected to cast their votes in constitutional amendments that have been on the agenda since Erdoğan's election as president in August 2014.The changes will abolish the post of prime minister, which the AK Party claims resulted in an ineffective two-headed political system, replacing it with a stronger system, which is expected to produce stability and a more effective governing system in the long term.